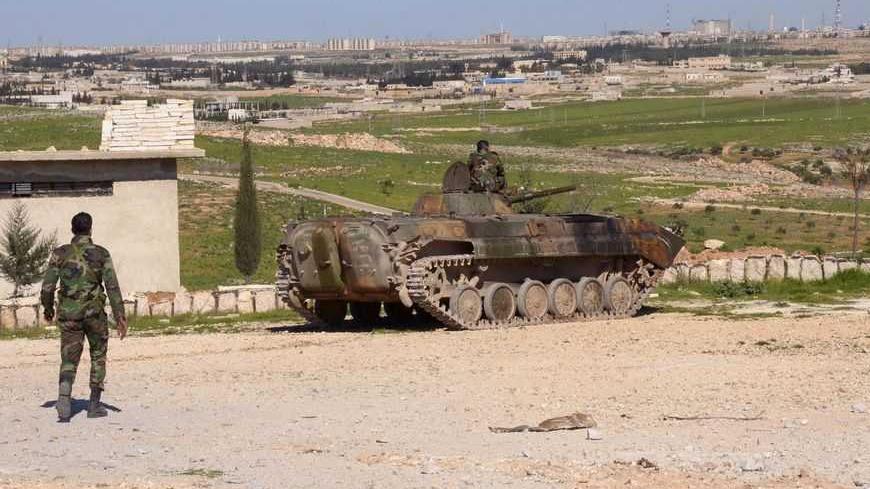 A soldier loyal to Syrian President Bashar al-Assad walks toward an army tank in an area near Aleppo, March 6, 2013. - REUTERS/George Ourfalian

Clashes between Kurdish militias broke out in rural Kurdish areas of the province of Aleppo on March 7. According to UK-based Syrian Observatory for Human Rights, at least four fighters were killed, and other Kurds were captured by the the People’s Defense Units (YPG). The fighting shows the underlying tensions among Kurdish political groups in Syria and brings back memories of the civil war between Kurdish parties in neighboring Iraq in the 1990s.

The fighting broke out in the villages of Burj Abdilla and Abdilla in the Efrin region, in the province of Aleppo between supporters of the Kurdish Freedom Party (Azadi, in Kurdish) and the People’s Defense Units, an ally of the Democratic Union Party (PYD), which is close to the rebels of the Kurdistan Workers Party (PKK) that is fighting in Turkey for cultural rights for the Kurdish minority.

The Kurdish Freedom Party led by Mustafa Cumma, a main rival of the PYD with grass-roots support especially in Kobani and Efrin, is the most critical of the PYD and its policies and accuses the PYD of authoritarianism and working with the Syrian government.

This while media affiliated with the PYD often accused the group of working with Turkey and supporting "armed gangs" such as the Kurdish Salahadin brigade and the Free Syrian Army (FSA) against the PYD.

Therefore, there have been tensions and clashes before between the Kurdish Freedom party and the PYD before in Aleppo and Cumma was detained by the PYD in June 2012 when he was heading to Iraq.

The Kurdistan Regional Government, led by the Kurdish President Massoud Barzani, however, pressured the Kurdish parties allied in the Kurdish National Council (KNC) to work together with the PYD in order to prevent a civil war between Kurds. This pressure led to the signing of the so-called Erbil-agreement to share power in the Supreme Kurdish Council.

The Azadi party, however, last month withdrew from the Kurdish Supreme Kurdish Council claiming the council is increasingly dominated by the PYD and its allies within the KNC and to protest the continued detainment of one of its members Alladin Hamam and his son in February on charges of supporting Syrian rebels.

Although the Supreme Kurdish Council officially unites the different Kurdish nationalist parties in Syria, in reality two blocks have been formed: the PYD with members of the KNC who are funded by the Iraqi President Jalal Talabani’s Patriotic Union of Kurdistan (PUK) and a KDP-funded four political party alliance called the Democratic Political Union, including Azadi. The Democratic Political Union is supported by the Kurdistan Democratic Party (KDP) led by Barzani and is increasingly getting armed.

The Azadi party in a statement claimed that claims the joint bodies between the Kurdish parties are not working and blamed the “Supreme Kurdish Council for failing to show real leadership.” The group suggested that the council “turned sadly into a political cover for shameful acts by the Democratic Union Party and it’s militia at the expense of the security and safety of the Kurdish community.”

Maria Fantappie, the International Crisis Group’s Middle East analyst, told Al-Monitor that she doubts that the Syrian Kurds will engage in a real civil war. “I think that Barzani will keep his priority to avoid an intra-Kurdish confrontation. This Syrian Kurdish Party Union might serve counterbalance the YGP control of the ground, but not to fight against it.”

But Vienna University political scientist Thomas Schmidinger, who did research on Syrian Kurds in Syria in January, still fears more violence. “I fear that tensions between PYD on one side and Azadi and other KNC parties (especially the parties closer to Barzani's KDP) could result in a civil war between the Kurds.”

Cumma, who lives in the capital of the Kurdistan region, Erbil, blamed the PYD in an interview with the Kurdish newspaper Rudaw: “Our party is revealing the wrong deeds of the PYD, that is why the PYD is targeting our supporters. Yesterday, they arrested 20, including a member of our political bureau Ebdulrahman Apo. I ask the presidency [Barzani] of the KRG to put an end to the PYD’s actions.”

But according to the YPG, an armed group took YPG fighters captive and went to Burj Abdula. “Then YPG units went to village to try to negotiate their release, but the group wouldn't release captives so armed clashes broke out. Three members of armed group got killed, three wounded, and more than 40 captured,” the YPG said in a statement.

The YPG said it would not allow any civilians to carry weapons and conducted house to house searches.

Mohammed Reşo, a PYD spokesman based in the Kurdistan region of Iraq, told Al-Monitor that the YPG operations are continuing, but he said that the political parties try to solve their differences. “The Supreme Kurdish Council in a meeting discussed the situation and want to calm down the conflict and they will establish a specialized committee to resolve the problem of all these different military battalions and ask them all to join this committee.”

Kurdish youth groups that played a significant role in staging protest against the Syrian government in northern Syria called on the Kurdish parties to bury their differences and work together for Kurdish unity.

“A Kurdish-Kurdish fight, will not be good for the Syrian people and especially not good for the Kurds, since it would weaken their position among the Syrian opposition,” said Bedir Mustafa, a member of the Kurdish Youth Movement (TCK).

But it remains to be seen if the political Kurdish parties would work together in the future and if more clashes would happen in the future.

The Kurdish Military Council and the Salaheddin al-Ayubbi Batallion, which allegedly has hundreds of fighters in Aleppo and is accused of having ties to Azadi, called for revenge and said from now on YPG barriers and checkpoints would be a target for them.

“From now we will not allow the presence of these disruptive forces in Efrin,” they declared.

Wladimir van Wilgenburg is a political analyst specializing in issues surrounding on Kurdish politics. He has written extensively for Jamestown Foundation publications and other journals such as the Near East Quarterly and the World Affairs Journal.