Turkey and Syria’s Kurds Edging Toward an Uneasy Peace? 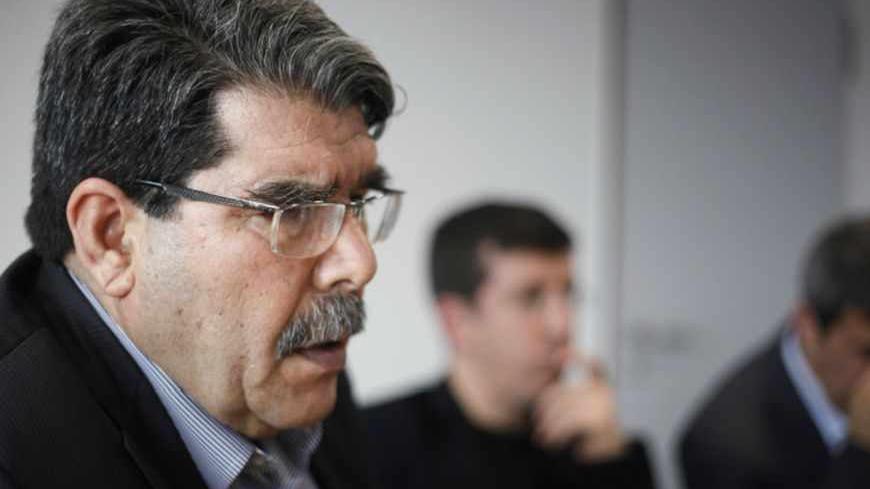 As debate continues over Turkey’s controversial Syrian policy, its uneasy relationship with Syria’s Kurds, a crucial element in the equation, goes largely unnoticed. Deadly clashes between the Democratic Union Party (PYD), the most powerful Syrian Kurdish group, and jihadist militias in the mostly Kurdish Syrian towns of Afrin and Tir Tamar that erupted on May 25, will likely change this. Media outlets sympathetic to the PYD suggest that Turkey, together with the Kurdistan Democratic Party (KDP), its chief Iraqi Kurdish ally, are prodding the conflict.

Such claims were already being aired last week, when on May 18 PYD forces intercepted some 74 Syrian Kurds crossing illegally into Syria from Iraq, where they had allegedly undergone training by the KDP. In a Skype interview with Al-Monitor on May 21, PYD leader Saleh Muslim said that the men, all of them Syrian Kurds, were “members of a clandestine sleeper cell trained and recruited by the KDP,” which heads the Kurdistan Regional Government (KRG) in Iraq. According to Muslim, the men confessed under interrogation to being told to “await instructions from the KDP” and were eventually freed. The KDP, nonetheless, sealed the Iraqi portion of the border with Syria that it controls, a vital supply line for the Syrian Kurds and a source of income and patronage for the PYD.

In a further twist, the Patriotic Union of Kurdistan (PUK), the KDP’s chief rival in Iraq, issued a statement carried by a pro-PKK news agency on May 25 condemning the border closure. “This was not a government [KRG] decision,” a PUK spokesman said, suggesting that the KDP had acted unilaterally.

The PUK has traditionally tilted toward the Kurdistan Workers’ Party (PKK) — the rebel group fighting for autonomy in Turkey’s mainly Kurdish southeast since 1984 and whose imprisoned leader, Abdullah Ocalan, is now in peace talks with the Turkish government  — and has Iran’s backing. It is now said to be cultivating the PYD.

Left unchecked, tensions in the Kurdish region in northern Syria, which Syrian Kurds call Rojava, or Western Kurdistan, could hamper Turkey's efforts to make peace with its own Kurds and trigger a broader intra-Kurdish conflict.

The PYD, the PKK's franchise,rose to prominence in July 2012, when Syrian government forces withdrew from a string of Kurdish-populated towns along the border with Turkey. The PYD quickly filled the vacuum, arming itself, organizing Kurdish-language classes and draping public buildings with Kurdish flags. The PYD’s power grab set off alarm bells in Ankara amid fears that Syria’s estimated 2 million Kurds would establish an autonomous region along the lines of the semi-independent Kurdish enclave in northern Iraq.

The prevailing consensus at the time was that Syrian President Bashar al-Assad had “rewarded” the PYD in order to punish Turkey for its unabashed support of the opposition rebels seeking his removal. The Kurds have remained largely neutral in Syria’s civil conflict, choosing instead to consolidate their gains in the north, which is home to a large share of the country’s oil reserves.

The PYD’s Muslim denies that his group has sided with Assad, pointing out that the Kurds had been among the Baath Party’s victims long before the uprising began. He has repeatedly called for dialogue between the PYD and Turkey. Muslim, who studied chemical engineering at Istanbul’s Technical University and speaks perfect Turkish, seems a natural interlocutor for the Turks. He is untainted by violence or armed activity against anyone. Syria’s Kurds, Muslim says, do not want independence, but so-called democratic federalism, a vaguely defined form of political and cultural autonomy.

While Muslim makes no secret of his admiration of Ocalan, whom he referred to as “our national leader,” Muslim denies that the PYD is in anyway linked to the PKK. His effort at disassociation is probably because the PKK has been labeled a terrorist organization by the United States and European governments, and thus Muslim does not want the PYD to be lumped with it.

Yet, not only have Muslim’s overtures been rebuffed by Ankara, but until recently the government of Recep Tayyip Erdogan had been threatening to intervene militarily against the PYD if need be.

KRG President and KDP leader Massoud Barzani is also unhappy with the PYD’s gains. Western media reports indicate that Syrian Kurds are chafing under the PYD dominance. In a bid to weaken the PYD’s grip, in July  2012 Barzani brokered a power-sharing agreement with its far weaker rivals, but the so-called Erbil Agreement continues to exist, for now, only on paper.

Unnerved by the PYD’s seemingly unstoppable rise, Turkey is widely alleged to have egged on its Syrian rebel protégés to take up arms against PYD forces. Meanwhile, the KDP has been quietly forming Kurdish militias to rival the PYD. In November 2012, fierce clashes between the PYD and Arab opposition fighters erupted in the town of Ras al-Ain, home to a mixed population of Arabs, Kurds, Circassians and other minorities. The town was a strategic prize wedged between PYD-controlled areas and bordering Turkey’s mainly Kurdish town of Ceylanpinar. Its capture by the PYD would have established a zone of uninterrupted Kurdish influence in northeastern Syria, which is why Turkey was intent on keeping it out of PYD hands. The battle ended in a stalemate, and a cease-fire brokered in January 2013 continues to hold, albeit shakily. There were reports of fresh fighting between PYD and rebel forces near Ras al-Ain on May 27. At least four rebels were thought to have been killed in the clashes.

There is little doubt that one of the main reasons Turkey’s Erdogan decided to relaunch talks with Ocalan in October 2012 was to persuade him to use his influence not only to rein in the PKK, but the PYD as well. Turkish officials, speaking to Al-Monitor on condition of anonymity, confirmed that Ankara had been in contact with the PYD leader, but Muslim denies this. “I wish it were so,” Muslim told Al-Monitor, “but I haven’t met with a single Turkish official.” Either way, Erdogan no longer mentions the PYD in his salvos against Assad.

Meanwhile, Muslim asserts that Turkey has ceased meddling in Ras al-Ain, but the violence in Afrin on May 25 suggests otherwise. A PYD source on the ground claimed that rebels from the Salafist Liwa al-Tawhid brigade had started the fight and that a separate militia with ties to Barzani had joined in.

“Liwa al-Tawhid is close to the [Syrian] Muslim Brotherhood, and we know who their sponsors are —Turkey,” the PYD source, who asked not to be identified by name, told Al-Monitor by telephone. When asked about Muslim’s assurances that Turkey was no longer engaged in proxy battles, the source commented, “Muslim is constantly traveling outside the country. He doesn’t know what’s going on.”

For its part, Ankara denies any involvement in the conflict in Afrin or elsewhere in the Kurdish-dominated territories. The absence of independent observers makes either claim impossible to verify. What is clear, however, is that if Turkey is sincere about wanting democracy for Syria, it cannot exclude the country’s Kurds from the equation, least of all while it sets about making peace with the PKK.

Some Syrian Kurds argue that for as long as Assad remains in power, friendly relations with Turkey is not in their best interest. “This would turn Assad and Hezbollah against the Kurds,” said the anonymous PYD source. “Could we count on Turkey to defend us?” he asked rhetorically. “I don’t think so,” he responded.

Such fear of incurring Assad’s wrath might explain why Muslim denies persistent media reports that PKK forces withdrawing from Turkey are joining the PYD. “No PKK fighters have come to Syria,” he insisted. “Not a single one.”

Amberin Zaman is an Istanbul-based writer who has covered Turkey for The Washington Post, The Los Angeles Times, The Daily Telegraph and Voice of America. A frequent commentator on Turkish television, she is currently Turkey correspondent for The Economist, a position she has held since 1999. On Twitter: @amberinzaman