Five Reasons US Should Change Policies Toward Syria’s Kurds

The United States may have been placating Turkey by denying a visa to Salih Muslim, head of Syria's Democratic Union Party. 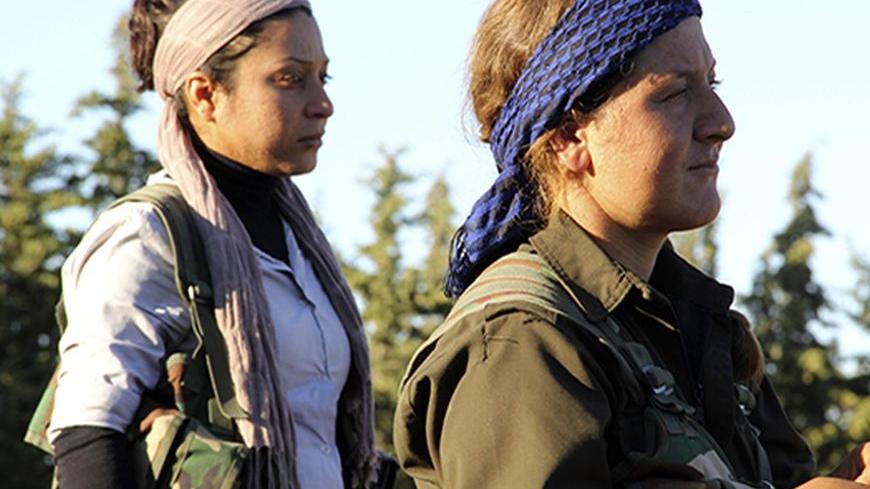 Syria’s most influential Kurdish group, the Democratic Union Party (PYD), which has been running a belt of mainly Kurdish settlements along the Turkish border since July 2012, has been knocking on Washington’s door for some time, but it remains firmly shut. The situation was driven home on Oct. 28 when Kurds from across the globe gathered for a groundbreaking conference called “The Kurdish Role in the New Middle East” held at the National Press Club in Washington, DC.

Organized by Turkey’s largest pro-Kurdish party, the Peace and Democracy Party (BDP), the event offered Washington pundits and policy makers a rare chance to take part in a conversation about the world’s largest ethnic minority, which despite not having a state of its own, has become a key player in the Middle East.

The star speaker was to have been Salih Muslim, the PYD’s co-chair, who was in his native town of Kobani, where he had recently buried his youngest son. Sherwan Muslim, 21, had fought within the ranks of the PYD’s armed wing, the Popular Defense Units (YPG), and was killed by an Islamic State of Iraq and al Sham (ISIS) sniper on Oct. 9. The grieving father’s travel plans were stymied when Iraq's Kurdistan Democratic Party (KDP) denied Muslim entry to Iraqi Kurdistan through the Semelka border gate under the control of the Kurdistan Regional Government (KRG).

According to Barzani’s point man for Syria, Hamid Derbandi, the reason for not letting the PYD leader through had to do with his criticism of the KDP during a recent speech in Stockholm. In the end, the KRG’s obstructionism didn’t matter. Though he denies this, it was widely assumed that Muslim had exited Syria through Yaroubiya, a critical border crossing to Mosul and al-Qaeda’s main supply route, which was captured from ISIS by the YPG on Oct. 26. Ultimately, Muslim made his way to Europe, only for the US government to continue to deny him a visa. He was left to address the conference via Skype.

I asked Muslim this week why he was being shunned by the United States. He responded, “It must be because of Turkey.” Muslim may be right, and US and Turkish officials, speaking off the record, confirm this.

Founded in 2003, the PYD operates under the umbrella of the Union of Kurdistan Communities (KCK), which also oversees the Kurdistan Workers Party (PKK), the rebel group that has been fighting the Turkish army since 1984 for Kurdish self rule. In the eyes of Turkey, the PYD and the PKK, which is classified as a terrorist group by the US State Department and the European Union, are one and the same.

It is no secret that the PYD and the PKK are intertwined. A third of the PKK’s fighting force is thought to be drawn from Syrian Kurds. Around two thousand of them are said to have joined the YPG in its ongoing fight against the Free Syrian Army and al-Qaeda-linked militias. Muslim has long accused Turkey of backing these groups in a proxy war against the Kurds. (He did acknowledge, however, in our conversation on Oct. 30 that Turkey’s support for its proxies may be fading). Veteran PKK cadres are helping the PYD organize their fledgling government in Syria.

But none of this explains the Obama administration’s cold shoulder toward the PYD. To begin with, unlike the PKK, the PYD is not a designated terrorist group.

Muslim has repeatedly declared his desire to engage with Washington. Yet, as Aliza Marcus, an expert on the Kurds, recently observed, the fact remains that the PYD is the most powerful, cohesive and best organized Kurdish group in Syria.

If Washington’s rejection is about placating Turkey, how does this square with the Turkish government’s overt engagement of the imprisoned PKK leader Abdullah Öcalan, in line with efforts to end the 29-year-old Kurdish conflict?

Turkey has been talking to Muslim as well. He was invited twice to Istanbul for meetings with senior diplomats and intelligence officials in July and in August, respectively. The talks have stalled, but this is because unlike its Kurdish rivals, the PYD refuses Ankara’s demands that it join the Istanbul-based Syrian National Coalition and formally declare war against Syrian President Bashar al-Assad. This, in turn, has reinforced claims that it is collaborating with the Syrian regime. Muslim rejects this idea, saying that the PYD stood in opposition long before the civil conflict in Syria began. He was jailed along with hundreds of fellow Kurds for his pro-Kurdish political activities. Muslim calls his party’s position “the third way.”

The Syrian opposition is in complete shambles. Why draw Assad’s wrath on his people just as they are consolidating their gains? And if the PYD were to openly challenge Assad, would the West, which has looked away as tens of thousands of Syrians have lost their lives, make an exception for the Kurds?

It is time that Washington reconsider its policy toward the PYD. To sum up:

But in the words of a Western official who spoke on the condition that he not be named, “By the standards of the rest of the country, they haven't been terrible.” And as Jim Jeffrey, a former US ambassador to Ankara and Baghdad, pointed out during his remarks at the Washington conference, “Talking to a group does not mean you assume their agenda.”