The leading Syrian Kurdish group claims it is not seeking to break away from Syria as tensions escalate with Ankara. 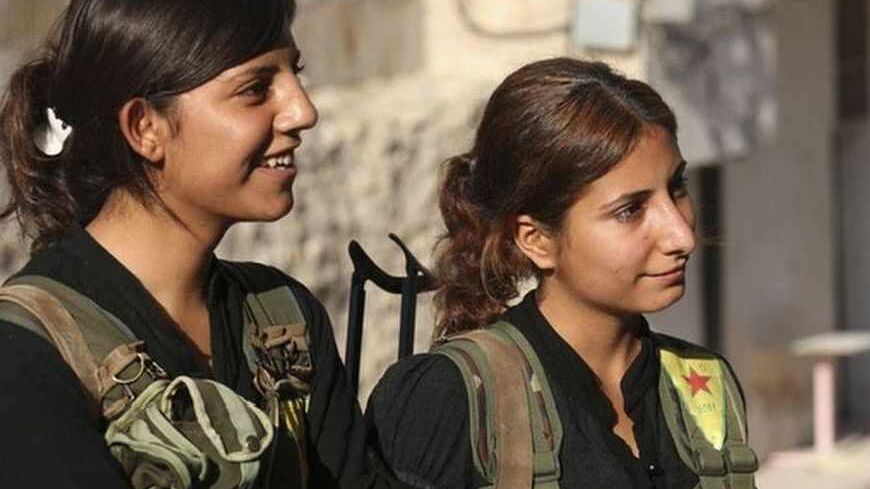 The wresting of the strategic border town of Ras al-Ain on July 19 by a Syrian Kurdish militia from jihadist groups has prompted worries in Turkey that the Kurds of Syria are following in the footsteps of their brethren in Northern Iraq and are heading toward self-rule. But the chairman of the group known as the Democratic Union Party (PYD) told Al-Monitor that Turkey has “nothing to fear.” Speaking via Skype, Salih Muslim asserted, “We have no intention of breaking away from Syria, nor of setting up a federal entity along the lines of the Kurdistan Regional Government in Northern Iraq.”

All that Syria’s Kurds want is to be able to freely express their long and brutally suppressed identity and to run their own affairs in a string of largely Kurdish-populated enclaves along the Turkish border. The PYD won control over these a year ago when President Bashar al-Assad re-deployed his forces to fight opposition rebels elsewhere in Syria.

As fellow Al-Monitor contributor Wladimir van Wilgenburg outlined in a recent and thorough piece, the PYD has announced plans to form a “transitional authority” cobbled together from rival Kurdish groups, Arabs and other minorities. The group would be tasked with organizing elections within six months to elect a “Popular Council” to run the Kurdish-controlled areas. Ankara reacted angrily to the scheme, claiming that Assad, who is bent on revenge for Turkey’s support for rebels seeking his overthrow, was “behind it all.” Turkish Foreign Minister Ahmet Davutoglu said, “We cannot accept any de facto ethnic or sectarian-based situations; this will only deepen the conflict [in Syria]."

“From here on, we will respond in the most effective and immediate manner to any threat to our border security,” Davutoglu added. Even as he spoke, the Turkish army began deploying forces in Mardin province near Ras al-Ain. The Turkish General Staff said in a statement on July 21 that it had returned fire after several shells landed in the Turkish border town of Ceylanpinar.

A 17-year-old boy was killed and three others were wounded as a result of stray bullets fired during clashes between the PYD’s armed wing the People’s Defense Units, Jabhat al-Nusra and a fellow Al Qaeda proxy known as the Islamic State of Iraq and the Levant (ISIS).

Heavy fighting between the Kurds and jihadists was reported to continue further east in the oil-rich Hasakah province.

Muslim says that the PYD deserves international support for countering jihadist forces “who want to impose an Islamic emirate.” He declared, “We are fighting for a democratic and secular Syria.”

Paradoxically, the PYD’s battle against militant Islamists serves the interests of Assad, the West and of the notionally secular Free Syrian Army rebels alike.

And as the Iraqi Kurds have emerged as the biggest beneficiaries of the war in Iraq, so, too, have the Kurds in Syria of the civil conflict there.

Still, Muslim insists that Turkey’s reaction is “unwarranted” and “overblown.” The main purpose of the proposed interim government, he explained, was to help ordinary citizens cope with enormous challenges posed by the internal conflict. “There is no bread, no electricity, no gas,” he said. The interim administration would help address these problems. Not only that, it would embrace rival Kurds, Arabs, Christians and all other ethnic and confessional groups living in the regions currently under the PYD’s control. Once the civil war ends, the administration will be dissolved and the Kurds will seek consensus with fellow Syrians when establishing what he called “democratic autonomy” in the Kurdish zones. Muslim said he was open to discussing “all of this” with Ankara “at any time.”

But none of this cuts ice with Turkey’s ruling Justice and Development Party, which appears to have broken contact with Muslim. Muslim confirmed that he had not met with any Turkish officials after a last set of talks in Cairo in May. The PYD is viewed as an extension of the Kurdistan Workers Party (PKK), the Kurdish rebel group that has been fighting for Kurdish self-rule within Turkey since 1984. The fact that the PKK/PYD is running towns for the first time, even if in Syria, is both a strategic and a moral victory for the rigidly left-wing movement founded some 35 years ago by the imprisoned guerrilla boss Abdullah Ocalan. As the Syrian Kurds celebrated the first anniversary of their victory in Rojava (the Kurdish name for the Syrian Kurdish enclaves) inside Turkey, thousands of Kurds took to the streets in a replay of the celebrations that took place when the PYD unfurled its banners across the border a year ago.

Many Kurds argue that Turkey’s decision to allow Syrian rebels to use Turkish border areas as a rear base to mount their campaign to overthrow Assad was more about forging local alliances against the PYD than regime change. It was no coincidence, they add, that Ankara’s decision to formally pull the plug on Assad came only weeks after the PYD gained control of Rojava, though Turkey had in fact called for Assad to step down as early as August 2011. Similarly, Turkey’s Kurdish peace initiative was really about getting Ocalan to tame the PYD.

But as the PYD consolidates its foothold, sources close to the movement say that it is acquiring an identity of its own.

“The PKK component is getting thinner and the local character more pronounced,” said a Syrian Kurdish activist who declined to be identified by name. “The PKK has no experience administering civilians,” he added. “And it’s discovering that you cannot run local government the way you run a guerrilla army in the mountains. One has to respect local customs, people’s opinions and faith .. The result,” he concluded, “is that the PYD is becoming 'Syrianized.'” His account corroborates those of the rare journalists who have had access to Rojava and have returned with stories of locals chafing under the PYD’s draconian rule. Allegations of PYD misbehavior are catalogued by the Kurdwatch website.

All of this suggests that Turkey, rather than delivering threats, should allow events in Rojava to run their course. The PYD, as Muslim is quick to remind us, has not engaged in a single hostile act against Turkey despite the latter’s alleged support for Jabhat al-Nusra.

“They treated their wounded, gave them arms, sent them food, everything,” he said. “We haven’t fired a single bullet at the Turks but in Ras al-Ain the Turkish army was lobbing shells at us,” he added. On July 21, the PYD claimed that Jabhat al-Nusra had crossed in from Turkey with six tanks.

The brewing crisis between Turkey and the Syrian Kurds is compounded by the lack of progress in peace talks with the PKK. These have run into trouble over what the Kurds say is the government’s failure to deliver on any of its promises, including reforming anti-terror laws under which thousands of Kurdish politicians and activists have been jailed.

Turkey’s Prime Minister Recep Tayyip Erdogan retorts that the PKK has not stuck with its own pledge to withdraw all of its forces from Turkey by June.

While both sides continue to pay lip service to the peace agreement, it is looking shakier by the day. As the Turkish media continues to stoke public fury over the dangers from Rojava, it's becoming harder for the government to make any gestures, trapped by its own hawkish rhetoric. There remains the risk, though mercifully slim, that Turkey will revert to its old habit of using military force. The critical question then becomes this: Which Kurds will it target, the PYD or the PKK?

Amberin Zaman is an Istanbul-based writer who has covered Turkey for The Washington Post, Los Angeles Times, The Daily Telegraph and the Voice of America. A frequent commentator on Turkish television, she is currently Turkey correspondent for The Economist, a position she has retained since 1999. On Twitter: @amberinzaman