Rise of Islamic Front a disaster for Syria 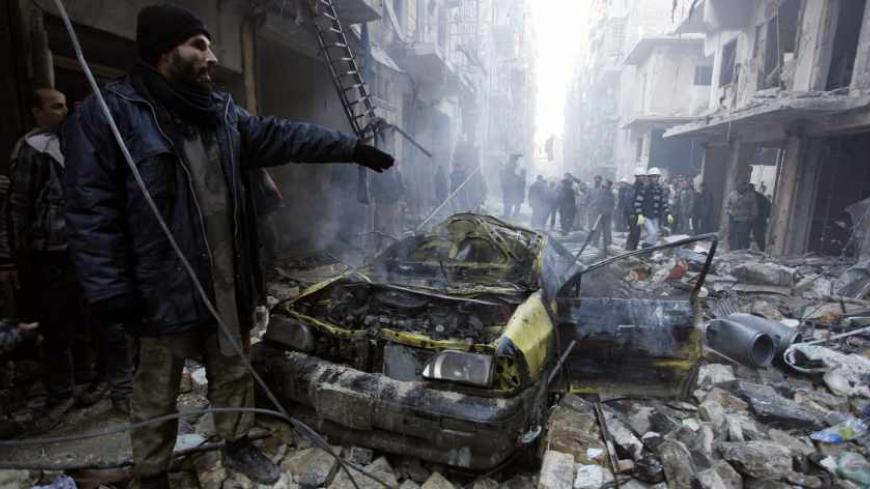 Residents look for survivors at a damaged site after what activists said was an airstrike from forces loyal to Syria's President Bashar al-Assad in the Takeek Al-Bab area of Aleppo, Dec. 15, 2013. - REUTERS/Molhem Barakat

On Dec. 11, The Wall Street Journal and other publications reported that Islamist rebels had seized the northern Syrian headquarters of Maj. Gen. Salim Idris, chief of staff of the Supreme Military Council of the Free Syrian Army (FSA), and warehouses containing equipment provided to the FSA by Western countries.

The same day, Al-Monitor had posted the latest column by Edward Dark (a pseudonym for an Al-Monitor columnist based in Aleppo):

“This new Saudi-backed Islamic Front is a fusion of Salafist jihadist Islamist groups, not as extreme in ideology as al-Qaeda’s Islamic State of Iraq and al-Sham (ISIS) or Jabhat al-Nusra, but nevertheless by no means mainstream like the FSA. It openly calls for Islamic Sharia rule instead of secular democracy, and was even implicated in sectarian war crimes like the Latakia province incidents documented by Human Rights Watch. ... Meant to counter the growing power and influence of al-Qaeda, especially in the north of Syria, it has none the less undermined the Western-backed FSA. ... Pretty soon there won’t actually be any FSA, at least not in terms of actual physical presence. To make matters worse, what was left of the FSA in the northeast of Syria, namely in the al-Qaeda-dominated al-Raqqa province, has disintegrated. ... In Aleppo, the FSA are being squeezed even further with ISIS openly threatening their leadership and positions in the north, just as the regime gains ground and consolidates its hold over the southern countryside of Aleppo.”

Dark has reported consistently for Al-Monitor, including, on Sept. 30, of the rapidly declining fortunes of the National Coalition of Syrian Revolution and Opposition Forces and FSA relative to jihadist forces in Aleppo.

This latest setback to the FSA, which US Secretary of Defense Chuck Hagel described as a “big problem” and which prompted the United States and the United Kingdom to suspend assistance, raises new questions about the fate of the Geneva II conference scheduled for Jan. 22.

The ascendance of the Islamic Front sends the Syrian opposition into further, and now near complete, disarray. This column on Oct. 27 wrote that the consequences of Saudi backing of Islamic armed groups was that “the Free Syrian Army is being hammered by the Syrian military on one side and by al-Qaeda and the Islamic State in Iraq and Syria (ISIS)-affiliated groups on the other … the moderate opposition is beset by disunity, the differing agendas of its patrons and a lack of military effectiveness and coordination, all of which is unlikely to change. This is not to be critical of those who are fighting for a democratic Syria; it is simply a reminder of the reality on the ground, that there is no military solution in the offing and that a political approach is more urgent than ever.”

The recent turn of events has made a bad situation much worse. The Islamic Front’s rise has been backed and bankrolled by Saudi Arabia and others, and its membership welcomes, by charter, foreign fighters, although the exact mix of Syrians and non-Syrians is not known.

While none of the seven groups comprising the Islamic Front are designated by the United States as terrorist organizations (unlike Jabhat al-Nusra and the Islamic State in Iraq and al-Sham, or ISIS), the front’s objective is to impose Islamic law in Syria, if not an Islamic regional or global caliphate. Aaron Zelin, a specialist on Salafi groups at the Washington Institute for Near East Policy, estimates that the front can field 45,000-60,000 fighters and “has close working relations with JN [Jabhat al-Nusra] and to a lesser extent ISIS.” According to Zelin, “many of the groups in the IF [Islamic Front] already have loose or informal relations with Saudi Arabia (most notably Jaish al-Islam) as well as Qatar and Turkey through NGOs such as the Humanitarian Relief Fund (IHH) and al-Khayriyya." He add that some of the front’s groups maintain foreign fighters in their ranks, especially Harakat Ahrar al-Sham al-Islamiyya (HASI), the largest of the seven groups.

The Syrian government, whose line all along has been that it will not negotiate with foreign-backed terrorists, may reconsider the terms of its engagement at Geneva II, especially now that its leading adversaries — the Islamic Front, Jabhat Al Nusra, and ISIS — are foreign-backed jihadists, not Syrian democrats. Damascus’ backers, including Moscow and Tehran, may find this argument persuasive.

Assad’s team might reconsider its willingness to enter into any discussions of a ‘transition’ in Geneva under these conditions.

In any case, there is no political transition until all sides stop the killing. The June 2012 Final Communique of the Action Group for Syria (known as the Geneva Communique) calls for an “immediate cessation of violence in all its forms.”

The first order of business, at Geneva II or via quiet diplomacy, or both, should therefore be a cease-fire, and an urgent plan for humanitarian relief for the millions of Syrians affected by the war.

If a cease-fire can be achieved, and it may be even harder now, this will be a success for diplomacy, a win for addressing the humanitarian crisis, and the first real hope for the Syrian people.

US officials need not belabor whether or how to deal with the Islamic Front, whose ascent is not just a big problem, but rather a disaster for Syria’s opposition and future. Most Syrians will likely want no part of the front and its jihadist brothers, given its agenda, patrons and increasing levels of foreign fighters.

No doubt the Islamic Front is a force on the ground. If anything, the Front, or the Syrians in it, should be subsumed into secular opposition forces with the National Coalition of Syrian Opposition and Revolutionary Forces, if that is even possible at this stage.

Also further sidelined with the rise of the Islamic Front has been the established, secular, democratic internal opposition to Assad, who should, finally, be given greater prominence to counter the foreign agendas in play.

The United States should take its cease-fire agenda to Saudi Arabia to get the front to put down its arms and stem the flow of foreign fighters to Syria.  The United States and its allies should finally bring pressure on individuals and states, including Turkey and Qatar, to shut down their support for foreign forces operating in Syria.  Those assisting Jabhat Al-Nusra, ISIS or al-Qaeda affiliated outfits should be called on to immediately stop such support or face penalties as sponsors of terrorist groups.

Russia and Iran, meanwhile, should be tasked to assure Assad’s commitment to hold up his end of a cease-fire, which may be less likely with the ascendance of the Islamic Front, and humanitarian relief operations.

Absent a cease-fire, there will be no "political solution" for Syria. More to the point, if Geneva II ends without a cease-fire, we can expect more violence, more refugees, more Islamic law, more terrorists and more instability for Syria’s neighbors.

In an exclusive interview with Al-Monitor, Gen. Michel Aoun, leader of the Free Patriotic Movement (FPM), the second largest bloc in Lebanon’s parliament, said, “Lebanon is paralyzed right now because of the Syrian problem.”

Aoun blamed the Lebanese government for the spread of the Syria war to Lebanon by not securing its borders early on.

Nasser Chararah wrote this week how Tripoli’s political culture has become radicalized as a result of the Syria war. The Lebanese army fears moving too harshly against radical Sunni groups in Tripoli could spur more violence, for fear of being accused of “taking sides.”

Samy Gemayel, a member of parliament and senior figure in the Kataeb Party, told Al-Monitor that it was Hezbollah who brought the Syria conflict to Lebanon.

“When you decide to go fight a war in another country, you have to expect that these people will go fight you in your own country,” Gemayel said.

On Dec. 3, Hezbollah leader Hassan Nasrallah, in an interview with Al-Monitor columnist Jean Aziz on OTV, accused Saudi Arabia of being behind the bombing of the Iranian Embassy in Beirut on Nov. 19, which killed 23 people, an escalation of tension between Hezbollah and Riyadh.

A senior Lebanese security official told Al-Monitor that the al-Qaeda-affiliated Abdullah Azam brigade, which had taken credit for the attack, was indeed the responsible party.

Al-Monitor congratulates our columnist Farea al-Muslimi for being named one of Foreign Policy's Leading Global Thinkers for 2013.