This week, the United States and the United Kingdom suspended nonlethal aid to the Syrian opposition, fearing equipment could fall into the wrong hands. 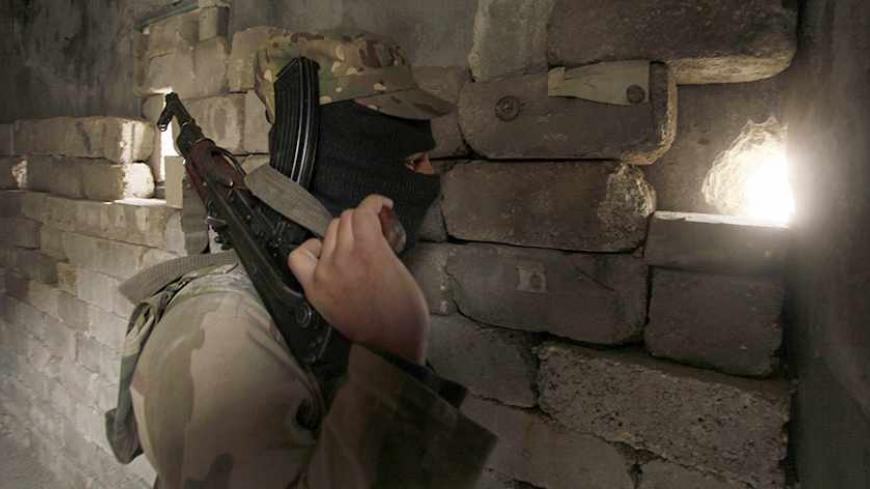 A member of the Islamic State of Iraq and al-Sham (ISIS) carries his weapon as he looks through a hole in a wall in the Sheikh Saeed neighborhood of Aleppo, Dec. 4, 2013. - REUTERS/Molhem Barakat
Edward Dark
@@edwardedark
December 11, 2013

ALEPPO, Syria — The bombshell that Gen. Salim Idriss of the Free Syrian Army (FSA)'s Supreme Military Command dropped last week, that he would be willing to join forces with the regime against al-Qaeda-affiliated groups in Syria, came without too much scrutiny, especially when he subsequently tried to backtrack and sugarcoat his statement. But for the observant, the subtle message was all too clear: The “moderate” Western-backed FSA rebels in Syria are on their last legs, pushed to the limit and desperate. They are making their last stand, here and now.

That this statement came out of desperation, from an organization that swore it would never deal with President Bashar al-Assad and that its only stated goal was to topple him from power, speaks volumes about the machinations, intricacies and subterfuges of the Syrian conflict, now nearing its third year and drawing ever deeper into a chaotic and messy quagmire.

On the face of it, Idriss’ moderate rebels have had crushing military setback after setback, being no match for the regime’s superior fire power and usurped on their own turf by better financed and organized jihadist Islamist rebels, who maintain a totally conflicting agenda and ideology. This position between the hammer and the anvil might have proven the last straw, as Idriss’ men threw in their lot with that of the other hapless opposition organization, the Syrian National Coalition, whose leader Ahmad al-Jarba also triumphantly announced that they were going into the fray after being provided with “assurances” by global powers.

This has much to do with the Geneva II conference, set for Jan. 22, which promises to be a veritable who’s who of top players on the Syrian pitch, with each side fielding their best team in the hopes of outmaneuvering and scoring as many points as possible against the other, while gaining as many concessions as can be achieved in the time allotted.

The fact that some sides aren’t playing ball — or at least not by the agreed-upon rules, most notably the Saudis, who have opted to create their very own “Islamic Front” team — throws a spanner into the works. This new Saudi-backed Islamic Front is a fusion of Salafist jihadist Islamist groups, not as extreme in Ideology as al-Qaeda’s Islamic State of Iraq and al-Sham (ISIS) or Jabhat al-Nusra, but nevertheless by no means mainstream like the FSA. It openly calls for Islamic Sharia rule instead of secular democracy, and was even implicated in sectarian war crimes like the Latakia province incidents documented by Human Rights Watch.

Meant to counter the growing power and influence of al-Qaeda, especially in the north of Syria, it has none the less undermined the Western-backed FSA. One need only look to the recent assassination of two FSA officers blamed on ISIS in the north, as well as the subsequent ISIS attack on the strategic border crossing of Bab al-Hawa on the Turkish border, held for over a year by FSA units. As ISIS attacked, the FSA called on Ahrar al-Sham — now part of the Islamic Front — for help. Ahrar al-Sham obliged, driving out ISIS, but at the same time taking over FSA positions, warehouses and heavy weaponry for "safe keeping."

It is this sort of cannibalization of the moderate FSA that has alarm bells ringing in Western capitals. Pretty soon there won’t actually be any FSA, at least not in terms of actual physical presence. To make matters worse, what was left of the FSA in the northeast of Syria, namely in the al-Qaeda-dominated Raqqa province, has disintegrated. As the Ahfad al-Rasoul Battalion splintered into different groups, many later pledged allegiance to ISIS. The same story was repeated in oil-rich Dier Ezzor, where tribal leaders opted to accept al-Qaeda’s presence instead of challenging it. In Aleppo, the FSA are being squeezed even further with ISIS openly threatening their leadership and positions in the north, just as the regime gains ground and consolidates its hold over the southern countryside of Aleppo.

And so begins the race, even against allies, to put together a workable solution that can be implemented in Syria. It is a given that many fighting factions, most notably the extremist Islamist militants, will not abide by any such agreements, and will therefore become the future enemy of a “new Syria,” should one be agreed upon by the various players.

In the frantic buildup and diplomatic arm-twisting before Geneva II, it seems the main priority is to get everyone on board with tackling the imminent al-Qaeda menace, which friend and foe alike admit is now the biggest threat to their interests and to regional and global stability.

Neither the Americans nor the Russians nor their respective allies want to see Syria turned into a launching pad for a global jihadist movement. The nervousness is particularly acute in Europe, some of whose own citizens have joined the ranks of al-Qaeda in Syria. The blowback from those radicalized militants returning home has even prompted some to send high-level security officials to Damascus.

Apparently, removing Assad has taken a backseat to a more pressing need. Building a feasible coalition of regime and opposition forces to tackle the al-Qaeda threat seems to be the first goal of any political settlement, a priority which has the backing of all the major players in the Syrian conflict except for Saudi Arabia.

The Saudis' overt backing and funding of the Islamic Front seems specifically geared toward scuttling any such deal. In terms of Saudi calculations, curbing Iranian influence in the Middle East is their number-one strategic goal. As far as Riyadh is concerned, a failed state ruled by Sunni extremists seems preferable to the existence of any Iran-friendly regime in Syria. But despite deploying its cards via the Islamic Front, it remains to be seen whether Saudi Arabia will actively defy an US attempt to form an anti-al-Qaeda coalition in Syria.