The ascendance of Islamic groups among Syria's opposition has clouded prospects for more advanced weapons to be provided to moderate factions. 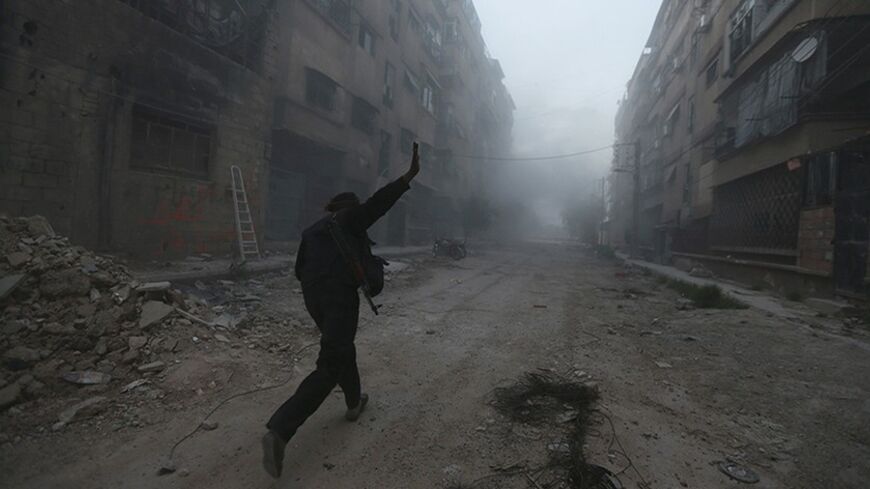 A rebel fighter gestures as he runs across a street in Mleha suburb of Damascus, during what the rebel fighters said was an offensive against them by forces loyal to Syria's President Bashar al-Assad, April 2, 2014. - REUTERS/Bassam Khabieh

Fear of armed Islamist groups in Syria has been a major sticking point between the United States and its regional allies in determining the quality of arms supplied to Syrian rebels. It was again high on the agenda on March 28 when US President Barack Obama touched down in Riyadh for a brief visit.

According to the Washington Post, Obama was considering backing down from his stern opposition to arming rebels with more advanced weaponry, including anti-aircraft missiles, or MANPADs. The Saudis have long pressed Western powers to arm rebel factions fighting to topple Syrian President Bashar al-Assad with sophisticated weapons, hoping it would turn the tide in the opposition’s favor in the three-year, brutal conflict.

To bolster its argument that it is taking concrete steps to limit the actions of jihadist groups fighting in Syria, Saudi Arabia passed unprecedented anti-terror laws that specifically targeted Saudi nationals fighting abroad, as well as listing Jabhat al-Nusra, the Islamic State of Iraq and al-Sham (ISIS) and the Muslim Brotherhood as terrorist organizations.

Proponents for further militarization of the Syrian war insist that “moderate” rebel fighters can be trusted with such sophisticated weaponry, and can be used as a counterweight to rising jihadist groups as well as to confront a national army receiving strong support from Iran, Russia, Iraq and Lebanon’s Hezbollah.

US officials continue to remain skeptical that such trustworthy, “moderate” rebels exist, or that arms provided to vetted, moderate rebels would not end up in the hands of the extremists. The distinction between “moderate” and “extremist” rebels in Syria has been presented in word only, without any substance to corroborate such a distinction. The Washington Post report, relying on “knowledgeable officials,” states that Riyadh has agreed to exclude any fighters who have worked with three jihadist groups: Ahrar al-Sham, al-Qaeda’s official affiliate in Syria Jabhat al-Nusra and al-Qaeda splinter group ISIS.

This mistakenly presumes that those fighting in other rebel factions are considered reliable to be armed with sophisticated weapons, and espouse moderate beliefs. A number of key Salafist and extremist factions operate beyond the three listed groups, and are wrongly touted as “moderate.”

The Islamic Front, for instance, is a nationwide coalition bringing together a number of Salafist groups that equally hold extremist ideologies. Ahrar al-Sham is one of the founding members of the Islamic Front, and is mainly active in Aleppo and the north. Jaish al-Islam, another key member of the coalition, largely operates in the Damascus countryside and is headed by Zahran Alloush. According to Syria expert Joshua Landis, the “difference between his ideology and that of al-Qaeda groups is not profound.”

The Islamic Front rejects democracy, a civil state and secularism, instead calling for a strict interpretation of Sharia and the resurrection of the Islamic umma. Syrian opposition sources and Western diplomats have told Al-Monitor that Islamic Front factions in the north are largely financed and supported by Qatar and Turkey, while Alloush’s Jaish al-Islam in Damascus enjoys Saudi support.

Saudi also touted Bashar al-Zoubi, head of the Yarmouk Brigade operating in the country’s south, as a potential “moderate” local partner that the West could trust. Zoubi was to head the new “Southern Front” that would, in an ideal Saudi world, receive US weapons through the Jordanian border. As reported in Al-Monitor, Zoubi, however, has worked with Jabhat al-Nusra on several occasions. Does this exclude Zoubi from receiving sophisticated weapons, as per Saudi Arabia’s proposed criteria cited by the Washington Post?

Jaish al-Mujahedeen, a small coalition of Islamist factions in Aleppo, has also popped up with much fanfare after it participated in attacks against the much-reviled ISIS. Do they fit the “moderate” criterion? In March, Mujahedeen fighters forced prominent opposition civilian activist, Marcell Shehrawo — a Christian — to wear an Islamic veil. Although the group later apologized, its overt Islamist leanings do not bode confidence in Jaish al-Mujahedeen as a reliable recipient of sophisticated weaponry.

One of the rare less-Islamist fighting forces, the Syrian Revolutionaries Front, was also raised in some media outlets as a potential reliable partner on the ground. The group is known to be backed by Saudi Arabia, and its leader, Jamal Maarouf, has been accused of being a warlord who has diverted resources for his own use. Maarouf this week told The Independent that fighting al-Qaeda was not his problem, and openly confessed to working and sharing military supplies with its affiliate in Syria. A Qatar-leaning source in the Syrian National Coalition told Al-Monitor privately that Saudi-backed brigades, formerly part of the Free Syrian Army, were largely criminals and bandits that locals despised.

More recently, the coordinated rebel attack on the Latakia countryside and the capture of the historic Syrian Armenian village of Kassab was celebrated by the Syrian National Coalition as a “military victory that will have important results.” Again, misguided support was given to what was presented as noble, moderate revolutionaries in the Latakia offensive. One of the main factions that steered the Latakia offensive was Sham al-Islam, a radical jihadist outfit run by former Guantanamo Bay detainee and veteran Moroccan jihadist Ibrahim Benchekroune. His fighters are largely other North African jihadists, who, according to reports, removed crosses at Armenian churches in the village, sparking an outcry from Armenians across the world, including Kim Kardashian.

Shant Kerbabian, a Syrian Armenian originally from Kassab, but based in Beirut, told Al-Monitor that locals fled out of fear for Jabhat al-Nusra.

“The crosses were taken down. This was confirmed, I spoke to a senior member of the community there,” Kerbabian said, adding that no massacres took place. Kerbabian, citing community leaders from Kassab, said that Jabhat al-Nusra was looting houses in Kassab after locals had left their belongings behind, transporting trucks into Turkey. Kerbabian added this demonstrated Turkey’s direct involvement in the invasion of Kassab.

“Jabhat al-Nusra fighters were saying that they want to bring their 'brothers' [residing] in tents and refugee camps and put them in Kassab,” Kerbabian said.

Media narratives are forever looking for a “good guy” to fight the “bad guy,” and are too quick to assign the “moderate” label to armed groups. But Syria is no Hollywood script, and the search for a noble rebel fighting force to combat Assad’s forces has so far yielded few results. Having seemingly learnt from the Afghan experience, the Obama administration has been right to take a cautious approach to arming rebels that might one day turn their weapons on them.

Britain’s Minister of State for Foreign and Commonwealth Affairs, Hugh Robertson, underscored the West’s primary concern in an interview with Al-Monitor last week.

"There is a clear [jihadist] threat to the United Kingdom. There are jihadists there, around 400 [Britons] that are being radicalized in Syria. This increases the importance of a political settlement in Syria.”

The risks are too high to send weapons into a war where moderates are too few.