In an interview, Jaish al-Islam spokesman Capt. Islam Alloush told Al-Monitor that the group is confident its goals will be achieved in besieged eastern Ghouta as it is transforming its "militia into a real army." 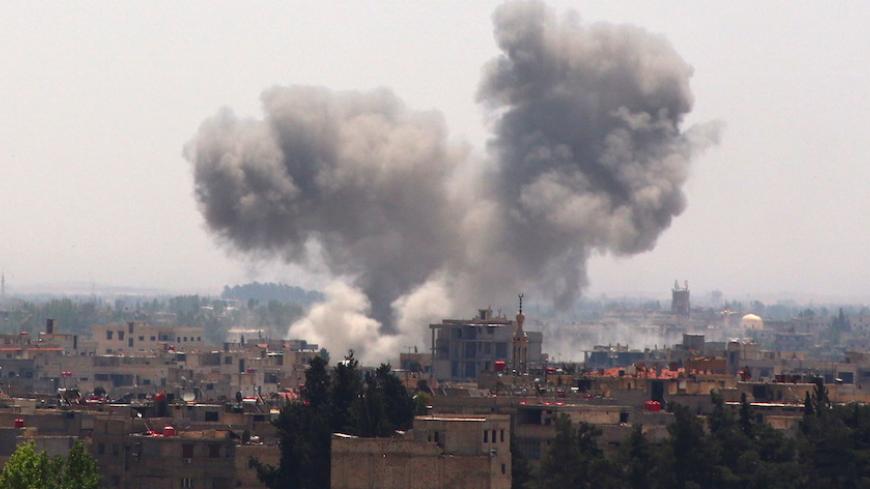 Smoke rises from what activists said was due to shelling by forces loyal to Syria's president Bashar Al-Assad on the outskirts of Damascus city in the eastern Damascus suburb of Ghouta, May 21, 2015. - REUTERS/Diaa Al-Din

ISTANBUL — Difficult access to its main area of operations has long made the Syrian opposition group Jaish al-Islam (JAI) a relative mystery to the outside world. A video released on April 29 showing a 1,700-strong military parade of its new "graduates" in the Damascus outskirts has drawn greater attention to it, along with a shift from calling for an Islamic state to its leader saying the people should choose the sort of state they want.

JAI spokesman Capt. Islam Alloush agreed to be interviewed by Al-Monitor in mid-May, in a gated complex housing mainly foreigners in Istanbul’s outlying suburbs. With a reddish-brown Islamist-style beard, wide-set eyes and a polite demeanor, Alloush claims no family relation to the group’s leader, Zahran Alloush.

The thickset 30-year-old former regime captain and military trainer from Idlib told Al-Monitor that he had first met Zahran in 2009 in the Sednaya prison, where he spent a few months and the future rebel leader was serving a longer sentence.

Zahran would go on to form Liwa al-Islam, the predominant group in the larger JAI, which was formed on Sept. 29, 2013, from over 50 smaller groups active around Damascus. He had been released in June 2011 as part of an amnesty by the regime of President Bashar al-Assad that many consider a strategic attempt to enable extremists to take over what was initially a peaceful uprising.

Liwa al-Islam initially rose to attention July 18, 2012, for bombing the national security headquarters in the Syrian capital, which killed Assad’s brother-in-law and Deputy Defense Minister Assef Shawkat and Gen. Hasan Turkmani, the assistant to the vice president, among others.

Since then, a joint operations room in the Damascus suburbs has enabled JAI to "end all crime in eastern Ghouta," Capt. Alloush told Al-Monitor. "The situation is very good," he claimed, despite the obvious humanitarian issues.

The robustness of the young men in military formation in the widely circulated video and the Muslim shahada on the flags contrast sharply with the photos of the gaunt faces and frail bodies of children seen more often coming out of eastern Ghouta.

The area has been under siege by the regime for over two years and was the site of the Aug. 21, 2013, chemical attacks in which hundreds of civilians died. It appears that only the Syrian regime would have been able to carry out such an attack, despite its official denial of responsibility.

JAI has been widely accused of being behind the disappearance of several civil rights activists, including the well-known founder of the Violations Documentation Center, Razan Zaitouneh, a charge Capt. Alloush scoffs at.

The video aimed to show the regime that it is up against a powerful, well-trained fighting force, he told Al-Monitor, adding that there are currently “about 30,000 men” in the group.

"At the same time, we are sending many messages to our fighters," he said. "We are [transforming] from a militia into a real army. And the message to Assad is that we are approaching your capital. For Syrian people: We can set Syrian people free."

There have been protests against the group in the areas under its control, but information from the ground is extremely limited. It has been years since any international journalist was able to enter the area in the Damascus outskirts.

A former high-ranking Interior Ministry official now actively involved in an opposition alliance and who travels frequently into northern rebel-held areas expressed misgivings about the group to Al-Monitor in a conversation in late May in southern Turkey, where he spoke on condition of anonymity.

His criticism did not stem from the group's extremism, but from observation. "The people in the area under Jaish al-Islam’s control are not happy," he said, noting that the group "forces all the smaller groups to join it. It doesn’t just work beside them, it makes them submit to it."

He compared the group unfavorably with Ahrar Al-Sham, the largest group in the Islamist opposition, which focuses its operations more in Idlib and Aleppo and "works alongside other groups but does not force them to join it."

A young woman in her late 20s who was in eastern Ghouta during the August 2013 chemical attacks and is now working for a nongovernmental organization in southern Turkey said, "At the beginning, they provided essential services. They helped with transporting people between the various towns in the area and with collecting garbage, for example."

The woman, who did not want her name used, told Al-Monitor that instead now "people are terrified of saying anything against them, since they will be called traitors if they do."

Another man from the area, a lawyer by profession now living in northern Europe but in daily contact with several individuals inside the area under JAI control, told Al-Monitor in a Skype conversation that the Tawbah prison is filled with several thousand people imprisoned without a fair trial by the groups active in the JAI-dominated area, and that the Al-Baton jail reportedly held a few hundred women and children taken prisoner from the Adra al-Omalia area. The men who had been taken alongside them are believed to have been executed, as were many fighters from the rival and recently disbanded Jaish al-Umma group more recently.

While the group has long called for a state run on the basis of Islamic law, Capt. Alloush sidestepped the question as to whether the group supported elections in a hypothetical post-Assad future, saying only that it wanted "what the Syrian people want."

The extent of the group’s Islamist stance is unclear.

Zahran Alloush is the son of a Salafist preacher living in Saudi Arabia and was born in Douma, in the Damascus outskirts. He has three wives, as do several other major leaders in the opposition — including even Jamal Maarouf, who headed up the reportedly nonreligiously-associated Syrian Revolutionary Front prior to its routing from its base in Idlib by local al-Qaeda affiliate Jabhat al-Nusra.

When asked for an opinion about Harakat Hazm — formed in early 2014 and the first to receive TOW anti-tank weapons from the United States, weapons that were later taken by Jabhat al-Nusra when it routed this group as well from the Idlib region in late 2014 — Capt. Alloush told Al-Monitor that it was "a very, very good group."

He praised the high number of defected military officers and said that they were well trained with what he called "a good ideology," that of moderate Islam.

JAI, like all the Islamist groups, does not use the "revolutionary national flag" since "there are so many extremist groups in Syria right now that would fight" the group if they did, Alloush said.

He noted that JAI had always fought against the Islamic State and was responsible for getting it out of the area now under its control. He admitted, however, that it was fighting on the same side as many other groups that have views similar to those of the group’s sworn enemy.

But while IS "has an ideology that is takfiri, and they kill everyone except IS," other groups in the opposition may "have the same ideology but don’t make the same chaos — for their fighters, for our fighters or for the Syrian people."