The myriad opposition factions in Syria could become a truly formidable force by uniting their efforts, but the task appears insurmountable given geographic and political divisions. 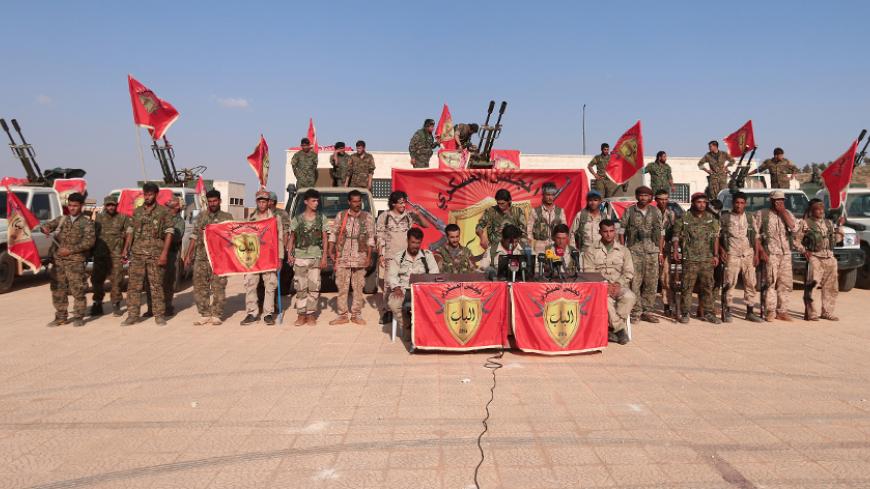 A new coalition of armed groups pose during the statement of the founding of the military council of al-Bab city and its provinces, in Manbij, Aleppo, Syria, Aug. 14, 2016. - REUTERS/Rodi Said

BEIRUT — The collapse Sept. 19 of the US-Russian agreement on Syria — which provided for a cessation of hostilities and greater military cooperation between both world powers — followed by a resumption in violence will further fracture an already-divided Syria. Since the 2011 revolution against Syrian President Bashar al-Assad began, powerful and conflicting undercurrents have shaped the country into de facto zones of influence, in its north and south, including around Damascus, with a different power structure emerging in each area.

Syria’s south, which shares borders with Lebanon, Jordan and Israel, is home to 1.2 million people, mainly Sunnis, as well as Christian and Druze minorities. The region is dominated by the mainstream Free Syrian Army (FSA) factions. Some 49 factions claim membership in the Southern Front, which comprises 20,000-30,000 fighters spread across the south and around Damascus. Unlike in other Syrian areas, Salafist jihadist groups have had little influence on the fate of the southern area.

Bashar al-Zohbi, head of the FSA-affiliated Yarmouk Brigade active in the south, explained that Jordan’s fear of Islamic groups may have contributed to the dominance of mainstream factions in the area. Other factors may have also played in, he told Al-Monitor, namely that southern Syria has a limited influx of foreign fighters and is home to different religious groups.

The commander added, nonetheless, that a small number of Islamic State (IS) fighters — fewer than 1,000 — are affiliated with Shuhada al-Yarmouk (Yarmouk Martyrs Brigade) and Harakat al-Muthanna in the southwest corner of the Syrian Golan.

“IS exists in southern Syria within a tribal structure; this means that many of its members do not identify ideologically with the organization and that a change in leadership could result in a change of loyalties,” Obyada Kadiri of Jabhat Ansar al-Islam told Al-Monitor from Turkey.

The rebels have launched several offensives against IS’ main affiliates in the region, thus containing the territorial expansion of the IS group eastward.

From a military structure standpoint, the southern region factions fall under the control of the Jordanian Military Operations Command (MOC) established in 2013 by the United States, which oversees weapons and financial supplies to rebels, as well as military operations.

According to Aron Lund, a nonresident associate at the Carnegie Endowment, “Beginning in early 2014, increased assistance from Western and Arab states and improved coordination among the southern armed opposition factions they support sparked a string of victories against regime forces.”

When by late January 2015, opposition forces had gained control over most of the city of Quneitra and the western side of Daraa, the MOC nonetheless stalled the rebels' advance, according to Turkey-based think-tank Omran Dirasat expert Sinan Hatahet. The idea was to prevent rebels from connecting Quneitra to Ghouta near Damascus. “It was a red line,” Hatahet told Al-Monitor.

Other observers such as Wael Alwan from Faylaq al-Rahman, a group present in the Damascus Ghouta area, told Al-Monitor that Jordan’s opposition to connecting southern Syria with Ghouta was to avoid the expansion southward of Salafist groups present around the capital.

Russian efforts also contributed to stalling the rebels' advance. According to an article published by Washington Institute experts Andrew J. Tabler and David Schenker in March 2016, “Moscow established a deconfliction center in Amman to ensure that Russian air operations would not inadvertently hit Jordanian ground forces in the border region.”

Rebels such as Kadiri said weapon supplies to mainstream opposition groups declined this year. Late in January, regime forces backed by Russian air cover recaptured the strategic town of Sheikh Maskin in southern Syria. Quoting diplomatic sources, the Financial Times reported at the time that the offensive flouted an understanding between Russia and Syria’s southern neighbors, namely Jordan and Israel, not to destabilize the region. It also allowed the regime to cut rebel eastern and western regions in half.

Located 75 kilometers (46 miles) from southern Quneitra, eastern Ghouta is one of the most important areas under rebel control, given its proximity to Syria’s center of power, Damascus. The region is home to two major factions, the Salafist movement of Jaish al-Islam (JAI) and Faylaq al-Rahman (from the FSA), as well as other groups such as Ahrar al-Sham and Jaish Fustat (an affiliate of Jabhat Fatah al-Sham, formerly Jabhat al-Nusra), with the first two groups boasting some 20,000 fighters, an insurgent source told to Al-Monitor.

As of today, JAI remains perhaps one the most powerful and largest rebel groups in Syria. Founded by Zahran Alloush, a Salafist released from prison in 2011, JAI has been led by Abu Himam al-Buwaydani since Alloush was killed in December. Interestingly, despite the domination of JAI over Ghouta, the area is governed by a joint civilian body known as the Unified Judiciary Council, which heads other civilian bodies such as the regional council (Majlil Mouhafaza) and local councils and is backed by a local police force, according to Alwan.

In recent months, the eastern Ghouta region was plagued by unrest after a series of unexplained assassinations and clashes between JAI and Faylaq al-Rahman over power and smuggling routes. In May, the two organizations reached an understanding to end the fight — which led to a division of fronts between the groups, with JAI taking over the northeastern front of the area, according to JAI's Mohamad Berakad.

At the center of Syria’s north is the country’s economic capital, Aleppo. The eastern half of the city is currently controlled by a Sunni Arab insurgency, while the western half is controlled by regime forces, according to a detailed piece by Carnegie's Lund issued in August. The surrounding rural region is nearly entirely under the control of an Islamist-dominated coalition of Sunni Arab rebel factions in the west and southwest. However, Kurdish groups control the northwest, while IS controls the northeast.

Aleppo is also home to a flurry of various rebel factions, mostly belonging to the FSA alongside Islamist brigades. The creation of the Conquest of Aleppo Operations Room (Fatah Halab) allowed for a certain level of cooperation between factions. More than 15 factions are included; some are affiliated with the joint military operations center in Ankara. The emergence of Jaish al-Fatah (JAF) in March 2015 has increased this coordination, as witnessed this August in the swift advance of rebel groups in the Ramouseh area.

According to a piece published by political analyst Wladimir Van Wilgenburg of Washington-based think-tank The Jamestown Foundation, the JAF alliance controls between 12,000 and 15,000 fighters and includes other Islamist rebel groups.

The same coalition rules further north. A few days after it was formed, JAF took control of Idlib, and with its leading factions Ahrar al-Sham and Jabhat Fatah al-Sham (then Jabhat al-Nusra) became the biggest player there. The province of Idlib also has at its disposal a massive number of fighters, about 40,000, according to insurgents interviewed in Turkey by Al-Monitor — information that could not, however, be independently confirmed. That figure includes other groups such as the 13 and 101 brigades, the Northern Brigade, Jaish al-Islam and Liwa al-Haqq, according to FSA legal adviser Osama Abu Zeid, who Al-Monitor interviewed in Turkey.

Syria’s north is undoubtedly the country’s most complex region and the most difficult to untangle if a solution is to be reached. In addition, the presence of a large foreign jihadi population, which joined the ranks of IS and Jabhat Fatah al-Sham, has complicated the military landscape.

“This is largely due to the negative role played by Turkey, which allowed the transfer of foreign fighters into the country,” one insurgent told Al-Monitor on condition of anonymity. The presence of IS has forced the insurgency to fight a multipolar war against the regime and IS, and now a potential new war is emerging against the Kurds.

Syria’s complex northern picture is the result of the rivaling agendas of Syrian factions. “The US failed us repeatedly and went back on its word to support us,” Col. Hassan Hamadeh of the 101 Brigade told Al-Monitor.

In 2015, the United States pulled the plug on its $580 million training program for rebels. “The initial competition for US backing, added to the diverging agendas of Turkey and Saudi Arabia, triggered rivalry among groups, which was also complicated by the US vetting process” — its indecision over which groups to support — the FSA's Abu Zeid explained. The dominance of more radical groups in the north can also be linked to Gulf countries favoring Islamist factions.

In this framework of geographical and ideological divisions, an attempt to consolidate rebel groups, which has been reported by many insurgents, appears to be an almost-impossible task, according to Omran Dirasat’s Hatahet. Achieving political unity in the form of one body representing rebels in Syria could nonetheless pave the way for better coordination. “A larger coalition in the likeness of JAF could be also another type of solution,” Hatahet added.