Syrian rebels are holding their ground in the south, but Russia is keeping the opposition in check. 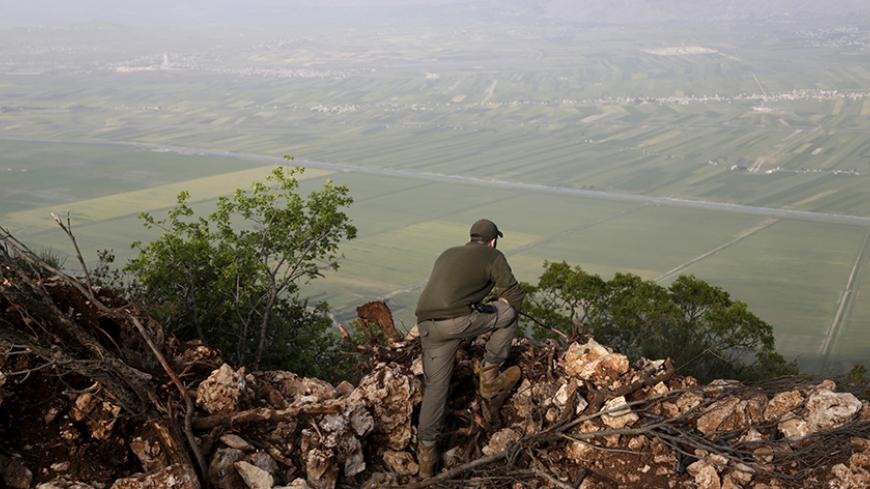 A rebel fighter stands on a hill overlooking al-Ghab plain, as he monitors the progress of the fighting from the Jabal al-Akrad area in Syria's northwestern Latakia province, April 29, 2015. - REUTERS/Khalil Ashawi

BEIRUT — Russia's military deployment in Syria and ensuing strikes against rebel positions have made large swaths of territory off-limits to rebels. These areas include not only the Latakia region — known as Syrian President Bashar al-Assad’s Alawite bastion — but southern Syria as well, where experts and fighters told Al-Monitor on condition of anonymity that the rebels’ advance toward Damascus has been purposely stalled by external players.

Russia has been building up its forces since July in the coastal region of Latakia. As 2,000 men were deployed starting in late September to a new air base near Latakia, the Russian air force took over Syrian skies, bombing Idlib, Homs and Hama — areas essentially under rebel control — as well as the Islamic State stronghold of Raqqa.

Russian intervention has stepped up as the Assad regime's hold, particularly around Latakia, has slowly weakened, with rebels gaining territory in recent months. The opposition, led by Jaish al-Fatah (Army of Conquest), which is made up of Salafist and jihadi groups such as Ahrar al-Sham and al-Qaeda-affiliate Jabhat al-Nusra, held their ground in nearby Idlib and surrounding rural areas. They expanded their reach in northern Syria toward the Latakia mountain range, firing rockets at the populous coastal city. August also witnessed clashes between rebels and troops loyal to Assad in Sahl al-Ghab, an area considered a strategic entry point to Assad's Alawite stronghold and a supply line in the region for forces loyal to the regime.

The recent positioning of Russia, thus, comes in response to increasing rebel attacks on the coastal region. “The Russian intervention carries a psychological importance; it aims at showing that the Assad regime survival is a [must] for Moscow,” Middle East expert Karim Emile Bitar, senior fellow at the French Institute for International and Strategic Relations in Paris, told Al-Monitor.

In a recent report, Fabrice Balanche, a Syria expert and visiting fellow at the Washington Institute for Near East Policy, linked the influx of Russian troops to the rebels' spring offensive near Idlib, which threatened the safety of Latakia, considered “Assad’s Achilles' heel.”

Syria expert Sinan Hatahet from Turkish think tank Omran Dirasat told Al-Monitor, “We saw the [buffer area] around Latakia shrinking with the attack on the Nabi Younes mountain, which is a strategic summit for any takeover of the coastal area. The Russian intervention is thus forcing local players to respect, once again, these [boundaries].” With Latakia becoming off-limits, rebels were expected to concentrate their efforts on the Hama region, something the Syrian regime appears to have taken note of, as described in a recent piece published on opposition website al-Souria.net. According to the piece, regime forces — including military troops such as Liwaa Al-Assoud Al-Jabal and National Defense Forces — were regrouping in the eastern Hama area and western Sahl al-Ghab. “We also have reports of the presence of Russian [military] experts in Hama,” explained an officer in the moderate rebel group Suqour al-Jabal, speaking with Al-Monitor on condition of anonymity.

While Russia essentially is beefing up regime forces in western Syria, it also appears to be closely watching the area from southern Syria to the capital Damascus.

Beginning in early 2014, opposition forces gained strength with the help of increased assistance from Western and Arab forces, which sparked a string of victories, according to the Brussels-based think tank Crisis Group. By late January 2015, opposition forces had gained control over territory encompassing most of the Quneitra province and the western third of Daraa province. A major regime counteroffensive in February south of Damascus, backed by Iranian and Hezbollah support, failed to halt the momentum of opposition forces, which extended their territory through much of eastern Daraa between March and June, according to Crisis Group.

While rebels have been able to hold their ground in the southern region, they have failed to make further gains or take over the city of Daraa. “Daraa has a symbolic importance for Hawran residents,” Hatahet noted. The same experts and fighters cited earlier believe, nonetheless, that the strategic battle lies elsewhere. For Hatahet, the Sanamein base should be the focus of rebel offensive, as its fall would threaten Damascus. For Mounif Kadah, a member of Ahrar al-Sham in southern Syria, the focus should be instead on the axis that stretches from Khan Arnaba, Beit Jinn and Qara, linking the southern region to Ghouta close to Damascus. That area is considered an easier target than the heavily guarded Sanamein base.

However, both men emphasized that the advance of the southern front in the region has been hindered by boundaries imposed by the Military Operations Center (MOC) in Jordan, which, according to sources, includes military representatives from the United States and Arab countries.

“Southern front brigades are backed and financed by the MOC which, for now, does not seem to favor the fall of Damascus, which could result in a vacuum,” said Hatahet. “Such a situation would herald the end of the regime and exclude the possibility of a political solution in Syria.”

In spite of these boundaries, rebels recently made gains in the Quneitra region with the capture of the summit of Tell Ahmar.

Kadah attributes ongoing battles in the sector to Salafist and jihadi factions. The factions, which do not belong to the southern front and are mainly connected to Ahrar al-Sham, Alwiya al-Furqan, Jabhat al-Nusra and Jaish al-Yarmouk, have refused to abide by MOC restrictions and are determined to link southern Syria to Ghouta.

Things could change if Arab countries start considering the Russian intervention in Syria a direct threat to their interests there. The Guardian daily reported that, just before the Russian bombing began, Saudi Foreign Minister Adel al-Jubeir warned that if Assad did not step down as part of a political transition, "his country would embrace a military option."