Will current truce pave way for permanent cease-fire in Syria?

Experts on Syria say the recent cease-fire implemented in Syria is only a temporary truce that will not lead to a long-term peaceful solution to the crisis. 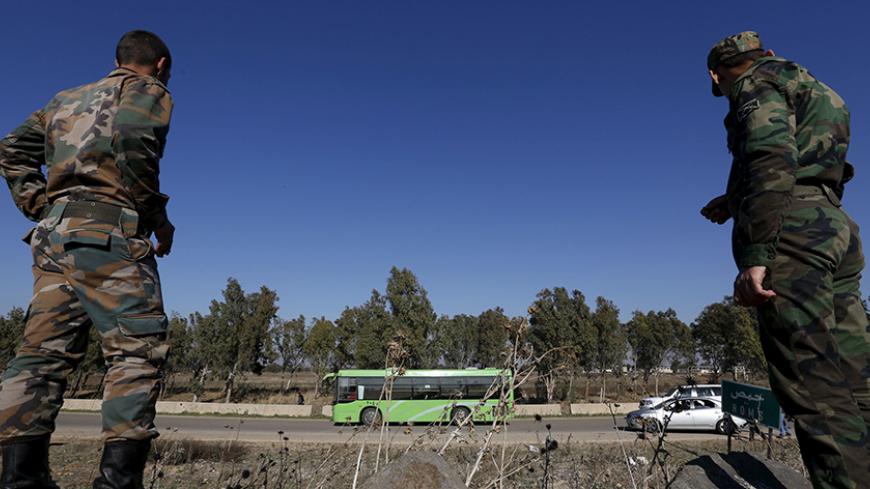 Syrian army forces look on as buses leave the district of Waer during a truce between the government and rebels, in Homs, Syria, Dec. 9, 2015. - REUTERS/Omar Sanadiki

A Russian and US-sponsored cease-fire went into effect on the night of Feb. 27. The lull in fighting, which was violated by both sides several times during the weekend according to the Syrian Observatory for Human Rights, will be used by the regime to consolidate new areas falling under its control, experts say.

The temporary truce will be nonetheless difficult to maintain given the ingraining of extremist groups, such as Jabhat al-Nusra, in rebel areas and the labeling by both Russia and the Syrian regime of certain regions as radical, such as Madaya or some Aleppo areas that are often home to moderate or Islamic militants.

Paul Salem, vice president for policy and research at the Middle East Institute, told Al-Monitor he believes the cease-fire is only a temporary truce and in no way an opening for a long-term peaceful solution — an opinion also shared by Syria expert Fabrice Balanche from the Washington Institute for Near East Policy.

In a note published Feb. 23, Balanche estimated that the temporary truce would allow the army to create defensive lines before launching new attacks and consolidating gained territory while preventing counteroffensives.

In the past few months, the Syrian army has advanced in various areas around Syria.

A paper published Feb. 5 by the Institute for the Study of War said, “Russian airpower and Iranian manpower have brought President [Bashar al-] Assad within 5 miles of completing the encirclement of Aleppo city, the largest urban center in Syria and an opposition stronghold since 2012.”

Syria expert Sinan Hatahet, from Omran Dirasat, a think tank based in Istanbul, told Al-Monitor he believes the main areas to pose a threat to the cease-fire include Idlib, some of the Damascus suburbs such as western Ghouta and specifically Daraya, the Aleppo region, and Jabal al-Akrad, a region located on the border of Assad's Alawite bastion.

Speaking to Al-Monitor, a lieutenant from the Free Syrian Army (FSA) in Idlib, who chose to remain anonymous, said that control over the region was divided between various groups including Jabhat al-Nusra. “The positions of the FSA, Ahrar al-Sham and Jabhat al-Nusra are close together, and given that Jabhat al-Nusra does not fall under the cease-fire agreement, other groups might be targeted. These groups include FSA organizations such as Firqa Shamaliya [Northern Brigade], Suqour al-Jabal, Firqa 13 [13th Brigade] — which are all affiliated with the MOM [military operations center] — Kataeb 40, Liwaa al-Haqq and Harakat al-Bayan,” he said.

The MOM is a Western-, Turkish- and Arab-backed military center located in Turkey. Other groups deployed in the region include Faylak Sham, Ahrar al-Sham and Jund al-Aqsa, the lieutenant added.

“Power is shared between the various groups,” he said. Wary of being targeted by the Russian air force, Jabhat al-Nusra is said to be redeploying, leaving its positions and moving away from civilian locations, namely in the city of Sarmada, in the Idlib region.

Syrian expert Hatahet said certain areas in Damascus will probably witness a cease-fire breach, namely the area of Daraya. “The regime argues that Jabhat al-Nusra and the Islamic State [IS] are present in Daraya, which is actually exclusively home to groups such as Shuhada al-Islam and Ajnad al-Sham — the first group being affiliated [with] the MOC,” Hatahet added.

The military operation center (MOC), which is based in Jordan and supports Syrian rebel groups, is believed to be staffed by Arab and Western countries. Hatahet’s testimonial was confirmed in an article by Borzou Daragahi titled, “ISIS is nowhere near this city but the Syrian regime keeps bombing it anyway.”

According to Hatahet, Daraya has strategic importance to the regime because of its proximity to the Mazeh airport in Damascus.

The cease-fire situation will probably be tricky in the Aleppo region also. “The Russians consider northern Aleppo to be under Jabhat al-Nusra’s domination while it is controlled by the 13th and 16th Brigades and the Sultan Murad battalion, which are all affiliated with the FSA — alongside Harakat Nour al-Din al-Zenki and Jaish al-Mujahideen. The radical group is actually present on the western front of Aleppo,” the FSA lieutenant pointed out, adding that less than 1,000 Jabhat al-Nusra militants are deployed in Aleppo.

The region of Jabal al-Akrad will also probably be targeted in spite of the cease-fire, said Hatahet. Located in north Latakia, it is a key area for the regime when it comes to the protection of the Alawite rump state.

“It is a major frontline in spite of the absence of Jabhat al-Nusra there, the main groups being Firqa Sahiliya Aloula as well as Firqa Sahiliya Thaniya [First and Second Coastal Brigades] and the 10th Brigade,” Hatahet said.

There is more hope for the Syrian southern regions. Abu Mohamad, a fighter from Ahrar al-Sham, told Al-Monitor the region is for the most part under FSA domination, with the exception of small pockets of Jabhat al-Nusra fighters located in western Daraa as well as the rural Quneitra area.

“There is also a small number of IS militants in Horsh Hamad as well as western rural Quneitra, but mostly in the form of dormant cells,” the fighter said.

The Assad regime has also relied on local reconciliation efforts in certain areas of southern Syria to smooth out tensions, according to the Syrian Observer. The newswire reported Feb. 22 that a local reconciliation initiative was launched in Daraa, involving 1,000 locals and senior figures. “The initiative calls on armed groups to lay down their weapons in order to settle their legal status and return to normal life,” the report added.

Maintaining the cease-fire is essential in paving the way for a more permanent cessation of hostilities in Syria, which will need to be dovetailed by a real political process. US Secretary of State John Kerry warned Feb. 24 that a transition process was necessary and that, in its absence, “It may be too late to keep it [Syria] as a whole Syria.”

The winner-takes-all approach of regional players backing either the Assad regime or rebels might just prove Kerry right with a de facto partition of the country.