The creation of Jaish al-Sham might be indicative of widening ideological fissures inside Ahrar al-Sham and other Salafi movements in Syria. 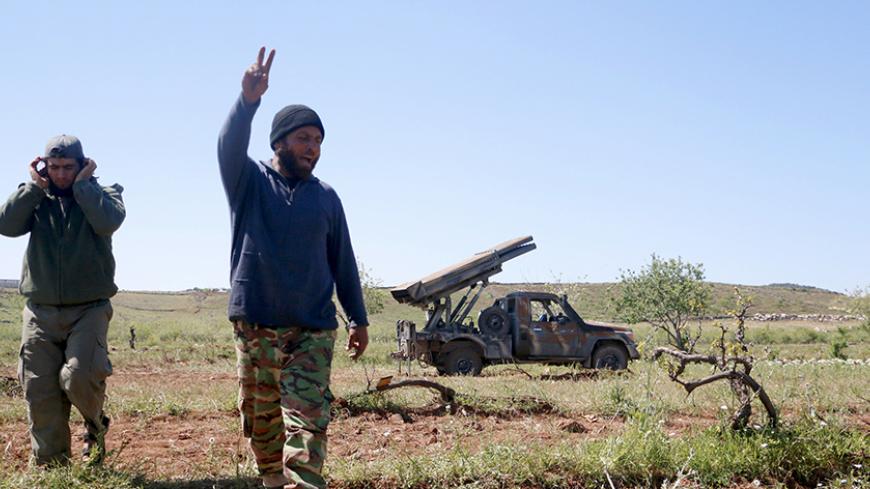 The Syrian Salafi scene witnessed in October the emergence of a new fighting force called Jaish al-Sham, which appears to have distanced itself from other hard-liners by embracing populist and nationalist slogans.

With the polarization of the Syrian military scene, Salafi organizations such as Ahrar al-Sham have gained power and notoriety. The militant group, which is active around the Idlib region, is also present in Hama and Daraa. According to the University of Stanford’s website, Ahrar al-Sham is perceived as a more moderate Islamist alternative to other Salafi factions.

On Oct. 16, Carnegie Endowment’s researcher Aron Lund, who is the editor of the website Syria in Crisis, published a report on a new faction that appears to have resulted from a split within Ahrar al-Sham.

“The creation of Jaish al-Sham reflects the feeling of unease experienced within Ahrar al-Sham,” Sinan Hatahet, a researcher at think tank Omran Dirasat, told Al-Monitor. Omran Dirasat, based in Istanbul, also published a report on the new faction.

Jaish al-Sham has branches in Aleppo, Idlib and Hama, and is comprised of about 5,000 fighters, although Lund believes the figure to be closer to 1,000, recruited mostly from smaller groups. “The group is expected to consolidate smaller factions,” Syrian Islamic scholar Sheikh Hassan Dgheim told Al-Monitor in a phone interview from Turkey.

According to Lund, Naser is a former prisoner of the Sednaya military prison and one of the original founders of Ahrar al-Sham in 2011. According to Dgheim, Aboul-Tout, who played a part in the 1979-1982 Muslim Brotherhood insurrection, which took place under the mandate of former President Hafez al-Assad, is considered the Jaish al-Sham spiritual leader.

Most of these figures, explained Hatahet, have either been recently pushed to leave Ahrar al-Sham or left it out of their own volition. “We cannot really say that the Jaish al-Sham founders are more moderate than Ahrar al-Sham’s members — they just have a different political project,” he added. “Unlike Ahrar al-Sham's members, they have clearly declared they should abandon weapons when the war ends.”

The group's strategic goal is to take over Aleppo’s eastern rural areas as well as the Deir ez-Zor and Raqqa regions, according to Dgheim. In addition, they have mentioned that they will be fighting both the regime and the Islamic State, which Dgheim said has made them the first Syrian rebel movement to clearly state its enmity with the terror organization.

Jaish al-Sham has publicized its members to be all native Syrians. Lund underlines as well the group’s use of the Syrian independence flag, “which has become a widely recognized symbol of the uprising against Bashar al-Assad,” but is not used by al-Qaeda-like groups, which generally opt for a banner with the Islamic declaration of faith.

The creation of Jaish al-Sham might be indicative of widening ideological fissures inside Ahrar al-Sham and other Salafi movements. This year was marked by an ongoing rivalry between two competing currents within Ahrar al-Sham, namely between the “more moderate” movement of Labib al-Nahhas, the head of foreign political relations at Ahrar al-Sham, and the more conservative views of the military branch represented by Mohammed Abu Sadek, which is believed to be closer to Jabhat al-Nusra.

The creation of Jaish al-Sham might be also a symptom of rivalry within other groups such as Jabhat al-Nusra, with some reports mentioned by Lund pointing to the possible adherence to the group of two Jabhat al-Nusra dissidents, Abu Maria al-Qahtani and Saleh al-Hamawi.

Last June, Islamic sources interviewed in Rihaniya, Turkey, by Al-Monitor had mentioned that Qahtani increased tension with the Jabhat al-Nusra leadership, resulting from Qahtani’s pragmatism and his willingness to work with Free Syrian Army factions, and further hinted to the possible withdrawal of Qahtani from Jabhat al-Nusra.

“These rumors are nonetheless still unconfirmed in spite of the fact that the creation of Jaish al-Sham was welcomed by Qahtani,” Hatahet said.

Hatahet added that the goal of the new organization and how it will fit within the overall Syrian military scene will depend greatly on how effective they will be at raising funds and weapons and their ability to collaborate with other groups, including Ahrar al-Sham.

The new movement’s ability to act nationalistic as a transition between Salafi mujahedeen groups and more moderate rebel groups remains to be seen. Generally speaking, mujahedeen groups such as Ahrar al-Sham or Jaish al-Islam view jihad as a tool against the Assad regime and do not conform to the transnational ideal of jihad of al-Qaeda-like groups, for which jihad across the globe is the ultimate goal.

“Does Jaish al-Sham represent a complementary project to more conservative groups? And is it a reflection of a rethinking process that is occurring at the regional level?” Hatahet asked. “Their success will depend greatly on their performance,” he said.

Performance alone will not determine the fate of Jaish al-Sham. It is certain that further polarization of the Syrian conflict, due to the direct military involvement of yet another player (Russia) in what has become an international proxy war, will make the transition from hard-liners to more moderate a more challenging exercise.