Will major opposition groups face off in Syria?

The new formation of Tahrir al-Sham, which is comprised of several Syrian opposition factions including Jabhat Fatah al-Sham, raises questions about the goals of this new group. 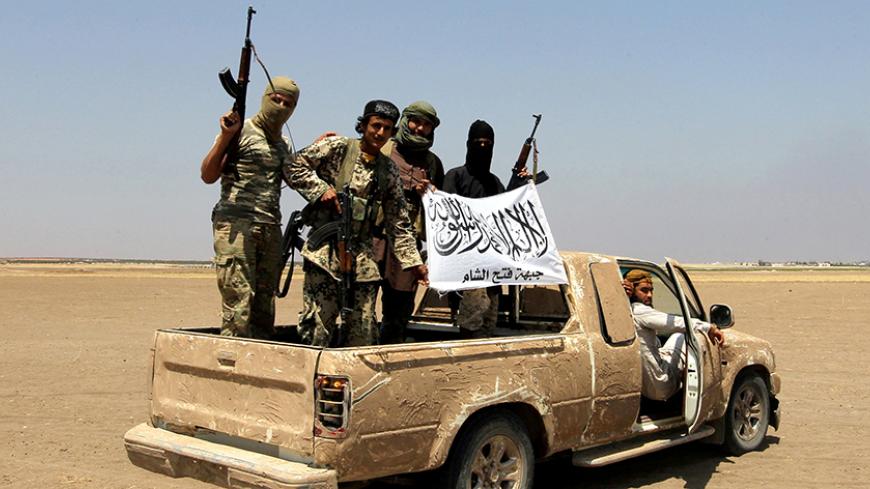 It didn't take long for Syrian jihadist groups to react to the first round of the Astana talks on Syria that were held Jan. 23-24 in the capital city of Kazakhstan. Jabhat Fatah al-Sham, formerly known as Jabhat al-Nusra, a former al-Qaeda affiliate in Syria, attacked the Syrian sites of the factions that participated in the talks under the sponsorship of Russia, Turkey and Iran in Astana.

Jabhat Fatah al-Sham, which is classified as a terrorist group by the United Nations and the United States, attacked on Jan. 24 the headquarters of Jaish al-Mujahideen and al-Jabhat al-Shamiya in the governorate of Idlib and the countryside of Aleppo.

Meanwhile, Jaish al-Mujahideen, along with other smaller factions, announced Jan. 26 their full allegiance to the Ahrar al-Sham movement — the biggest armed Syrian faction, classified as moderate by the West, Turkey and the Arab countries.

On Jan. 28, several jihadist groups announced their dissolution and the formation of a new armed group called the Organization for the Liberation of the Levant, commonly referred to as Hayyat Tahrir al-Sham (HTS), which is a merger between Jabhat Fatah al-Sham, Nour al-Din al-Zenki Movement, Liwa al-Haqq, Ansar al-Din Front and Jaish al-Sunna.

In its statement, the HTS called all factions to join its ranks for unity and for achieving the goals of the Syrian revolution, mainly the toppling of the regime and the establishment of a Sharia state.

The defection from the movement Sheikh (Abu Jaber) and of the former spokesman of Ahrar al-Sham, Abu Yusuf al-Muhajir, and the announcement of their full allegiance to the HTS came to end the division within the movement between two ideological currents — one close to the Muslim Brotherhood and another that adopts al-Qaeda’s vision. Sheikh (Abu Jaber), who was appointed head of the newly formed group, said in his first statement Feb. 9 that the group is independent and does not serve as an extension to any other organization or former factions. He added that it is rather a merger between different factions and groups to face the “serious turning point” and the challenges at the political, military and civil levels.

Sheikh (Abu Jaber) said the HTS is seeking to “unify the Syrian factions under a single unified command, leading the political and military work of the Syrian revolution in order to achieve its main goal, which is to topple the regime and liberate all Syrian territories, uphold territorial integrity and preserve the Islamic identity of the people.”

He added that military action against the regime is imminent.

Abdullah Suleiman Ali, a Syrian researcher and reporter specializing in jihadist movements, told Al-Monitor, “The formation of the HTS has caused sharp polarization between the armed factions in northern Syria, which almost led to a division between two main groups — the first led by Jabhat Fatah al-Sham, and the other by the Ahrar al-Sham movement.”

Commenting on whether this new formation was the result of the Astana talks, where opposition groups were sorted between moderates and hard-liners, Ali said it is too early to judge. He said that the Astana factions' joining of the Ahrar al-Sham movement could mean that the factions may adopt the same conditions as Ahrar al-Sham for any political settlement, which could lead to the obstruction or failure of the Geneva talks.

Ali explained that with the formation of the HTS, Ahrar al-Sham could no longer show any flexibility vis-a-vis the political process, which could serve HTS propaganda and thus lead to a wave of defections within Ahrar al-Sham's ranks.

Muhammad Alloush, a Lebanese researcher and analyst specializing in Islamic movements, told Al-Monitor that the HTS seeks to merge all factions upholding al-Qaeda ideology under one banner and secure as many weapons as possible.

The HTS was formed amid fears on behalf of Jabhat Fatah al-Sham that it would be marginalized from the political scene following regional and international agreements on a political settlement in Syria. Jabhat Fatah al-Sham also feared that “moderate” armed groups would confront it militarily should such agreements be reached. In this context, Alloush said, the HTS is trying to have more military and political influence on the ground in an attempt to curb any agreement resulting from the Astana or Geneva talks, repeating the Islamic State's scenario in controlling large Syrian areas between 2013 and 2014.

Ali also expects the HTS to attack Syrian army positions, taking advantage of the current low-key approach of Ahrar al-Sham, in order to gain more allegiances under the pretext that it is the only faction fighting against the regime. He said that Abu Mohammed al-Golani, head of Jabhat Fatah al-Sham, is well aware that he is wanted internationally and that Russia’s plan to sort between “hard-liners” and “moderates” in Astana is a prelude to the declaration of a fierce war against his organization.

According to Ali, Golani also fears the growing power of the group within his organization that is refusing to disengage from al-Qaeda and that objects to the merger with some of the factions within the HTS because of the lack of a clear ideology and political objectives of such a merger.

Golani was pressured at home and abroad to find a swift solution that would be satisfactory to the cadres within the organization, and to eliminate any international reason to target him by not adhering to the global jihad and not seeking to establish an Islamic state without relinquishing his grip over leadership positions with the HTS. Indeed, Golani kept his position as the general military commander in the HTS secret, Ali said.

The pertinent question, however, is whether the two groups will be dragged into infighting or maintain some kind of military coordination against the Syrian army — especially since several mediation efforts to this effect have yet to yield results.

For his part, Alloush expects the two groups to come face-to-face on the battlefield given the large overlapping areas of power and their attempt to integrate the biggest number of factions in their ranks.

Alloush said the HTS fears that Ahrar al-Sham might become the spearhead of the factions fighting against it should the Syrian opposition decide to kick al-Qaeda and foreign fighters out of the country. Therefore, the HTS is trying to inflame the situation with Ahrar al-Sham, especially through social networking sites, where prominent HTS figures are raising questions about the intentions of Ahrar al-Sham in Syria.

Alloush does not exclude a rapprochement between the Islamic State and the HTS in the future if all other groups unite against the latter.

In the same context, Ali said he does not expect the HTS to be supported regionally, as some regional parties — in light of the new international trends to fight against terrorism — had given up on some of the armed factions in Syria. However, some regional stakeholders might still be banking on turning some “terrorist-classified” groups into “moderate” factions.

According to previous statistics, the number of HTS fighters is expected to reach more than 25,000. They are deployed in Idlib, as well as in the countryside of Aleppo and the northern countryside of Hama.

*Editor's note: This article has been updated since its initial publication.