In response to losing Aleppo at the end of 2016, several Syrian opposition factions have unified their ranks into two large entities, namely Hayyat Tahrir al-Sham and Ahrar al-Sham. 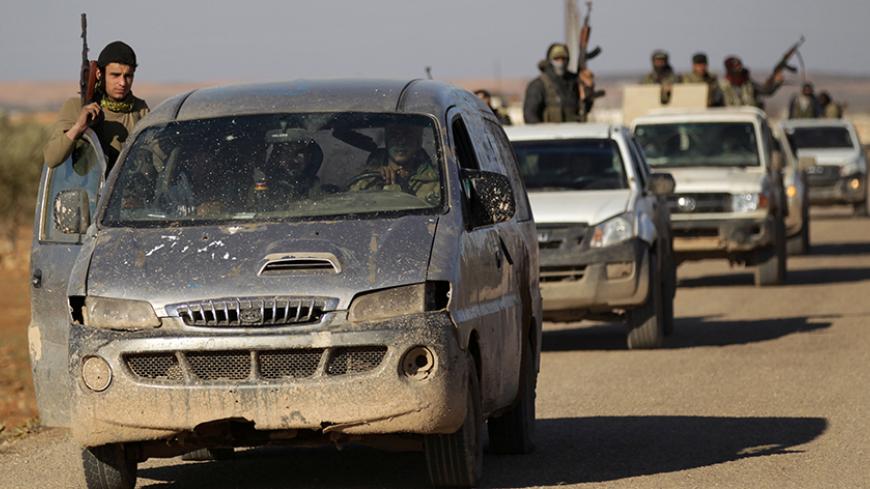 Rebel fighters ride in a convoy on the outskirts of the Islamic State-controlled northern Syrian town of al-Bab, Syria, Feb. 3, 2017. - REUTERS/Khalil Ashawi

ALEPPO, Syria — Significant developments are taking place in northern Syria, particularly in the areas held by the Syrian armed opposition factions. Large rebel factions joined the ranks of two large entities, namely Hayyat Tahrir al-Sham (Liberation of the Levant Committee) and Ahrar al-Sham. The factions’ divide since the outbreak of the Syrian revolution in March 2011 resulted in them recently losing many of the opposition-held areas, especially the eastern neighborhoods in Aleppo city on Dec. 22, 2016, which were of symbolic, geographic and strategic importance.

On Jan. 29, a number of military factions operating in northern Syria announced their integration into Hayyat Tahrir al-Sham, which includes Jabhat Fatah al-Sham (formerly known as Jabhat al-Nusra), the Nureddin Zengi Brigade, Jabhat Ansar al-Din and some of the Ahrar al-Sham battalions. In addition, factions such as the Fastaqim Kama Umirt Union, Jaish al-Mujahideen, Suqour al-Sham and Jaish al-Islam joined the ranks of Ahrar al-Sham.

As a result, two large entities consisting of all of the military factions in the north are now operating in northern Syria. Other factions in Rif Dimashq, Hama countryside and Latakia joined the ranks of either Hayyat Tahrir al-Sham or Ahrar al-Sham.

The rebels believe that it has become imperative for the military factions to be united at this stage, particularly since the Syrian armed opposition suffered losses in Aleppo and Rif Dimashq.

In this vein, Ammar Saqqar, a commander of the Fastaqim Kama Umirt Union now with Ahrar al-Sham, told Al-Monitor, “The factions’ unity and integration is not just an idea, but rather a necessity. Division has become illogical and would neither build a state nor establish a system of governance, which is an objective of the Syrian revolution. The fall of Aleppo city into the regime forces’ hands had greatly accelerated the idea of unity and integration. We believe that it is impossible to bring down the [Bashar al-] Assad regime unless one strong entity is formed, in light of the current challenges and unjustified international silence, after six years of death and destruction in Syria, and after the neighborhoods of eastern Aleppo were almost completely destroyed. Thus, the formation of a single military, political and security body is a necessity, to find an alternative for the criminal regime in Damascus.”

In regard to the cease-fire agreement and the integration’s impact on the truce, Saqqar said, “Killings and destruction are not our thing. We seek righteousness and we support the cease-fire, which depends on how honest countries guaranteeing the agreement are and on the international community’s endorsement of the agreement. Yet this has so far failed. The cease-fire was declared over by the regime forces in more than one area, the latest of which resulted in our people in Wadi Barada in Rif Dimashq being forcibly displaced. This has given us the right to respond at a time and place of our choosing, which is a right no one can deny us. Nevertheless, we are in favor of any solution, dialogue or efforts halting the bloodshed, the fighting and the regime survival, and bringing about the Syrian revolution’s goals.”

Prior to the factions’ announcement, angry protests have taken place in Idlib city and Idlib countryside, Aleppo province and Rif Dimashq since early January. The protesters demand the factions to be unified in a single entity that would restore the Syrian revolution’s prestige and prevent the fall of other areas into the hands of the regime forces and pro-regime militias as happened in eastern Aleppo. The protesters threatened to lead a civil disobedience in case their demands were not met.

In this context, media activist Mumtaz Abu Mohammad told Al-Monitor, “We have demanded that the Free Syrian Army factions be united for more than four years now. But our demands have fallen on deaf ears. The situation has become very serious now; the regime forces do not only threaten those fighting them, but also civilians, women, children and all of the residents in the rebel-held areas. We have no trust in the Syrian regime’s statements on a cease-fire, talks or dialogue. The warplanes are still shelling here and there, and thus the regime only understands the language of force that cannot be expressed in light of the military factions’ division and weakness.”

Mohammad added, “It is a good thing that large integrations that did not happen in the past are now taking place. The presence of two powerful entities is better than the countless divided factions. This will be reflected on the rebels’ military, security and institutional strength. The rebels will introduce themselves in external forums as the best, powerful and adequate alternative for the regime.”

Syrians are aware that the military factions’ integration has become an urgent need, particularly since the eastern neighborhoods of Aleppo city have fallen into the hands of the regime forces. They fear that the regime and pro-regime militias will conduct potential military operations in Idlib province, where hundreds of thousands of civilians and displaced people from various areas reside. In light of this integration, an efficient military force that would prevent any further losses is being established on the ground. This is true particularly since Idlib has become the last opposition-held area, after losing the eastern neighborhoods in Aleppo city in December.