The establishment of the new Syrian Liberation Front unifying the Ahrar al-Sham and Nour al-Din al-Zenki movements was swiftly followed by fierce battles between the new group and Hayat Tahrir al-Sham. 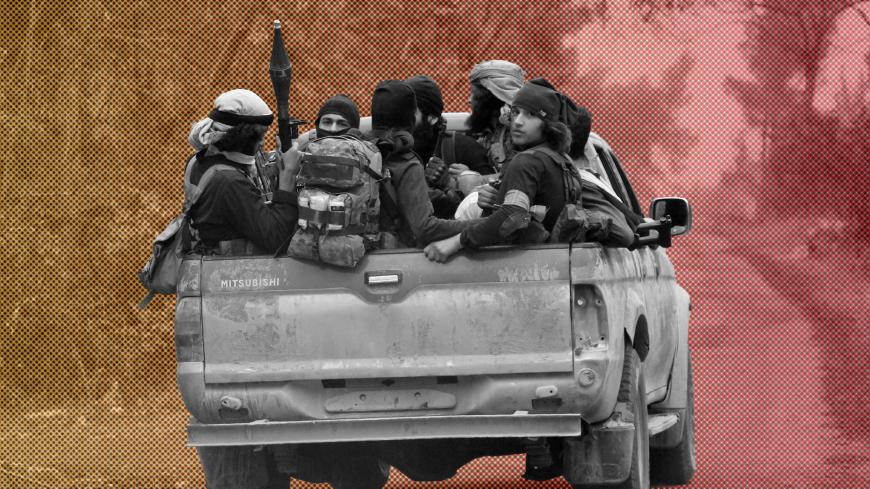 Rebel fighters from the Jaish al-Fatah Brigades, which included the Ahrar al-Sham movement, sit in the back of a truck as they take part in an assault on Syrian government forces west of Aleppo, Syria, Oct. 28, 2016. - OMAR HAJ KADOUR/AFP/Getty Images

The movements' decision to unite grew out of concern involving elevated tensions between Free Syrian Army factions and Hayat Tahrir al-Sham (HTS) in the north of Syria. HTS has been fighting Ahrar al-Sham and Nureddin Zengi Brigade after the two group's supporters accused HTS of failing to counter the regime’s assault on the Idlib countryside in early 2018. Prior to the unification, clashes had erupted between HTS and the Nureddin Zengi Brigade in November 2017 and between HTS and Ahrar al-Sham in August 2017. Mediation efforts in November by independent figures and clerics failed to reconcile the warring parties.

Mohammed Adib, who works in the Syrian Liberation Front's media office, told Al-Monitor that the talks took nearly a month and a half to work out the organizational aspects of the merger.

On Feb. 20, two days following the announcement, ferocious battles broke out between the Syrian Liberation Front and HTS in the Idlib countryside near the 111th regiment base and on the outskirts of Urum al-Kubrah village in western Aleppo's countryside as HTS tried to seize the village.

The Syrian Liberation Front tweeted Feb. 23 that it had taken control of Kafr Naya in western Aleppo and captured 70 members of HTS as well as a number of pickup trucks, weapons and ammunition.

The Syrian Observatory for Human Rights reported Feb. 23 that HTS took over the villages of Hass and Ruweiha and the town of Kafr Nabl in Idlib's countryside during battles against Ahrar al-Sham (now part of the Syrian Liberation Front). Backed by the Suqour al-Sham Brigades, Ahrar al-Sham fighters seized the cities of Ariha and Maarat al-Numaan as well as smaller villages such as Urum al-Jawz, Faqie, al-Mastumah, Nqeir, Wadi Deif camp, Abdeen, Tramla and Qassabiyeh in the Idlib countryside.

Adib added, “Nearly a month ago, we noticed that HTS was engaged in a media war targeting the Nureddin Zengi Brigade … in an attempt to psychologically prepare its members to eradicate Nureddin Zengi Brigade. This continued until the Liberation Front was announced. Two days later, we were surprised by HTS setting up checkpoints in the northern Idlib and western Aleppo countryside and embarking on large-scale arrests of the Syrian Liberation Front’s members. HTS then started to infiltrate positions held by the Syrian Liberation Front, which prompted us to combat them.”

He continued, “The battles are still ongoing and involve hit-and-run tactics and with heavy shelling by HTS on [areas we hold] in the western Aleppo countryside, wounding civilians. HTS is also using tanks, [armored] vehicles and dropping bombs via drones, but we are effectively countering them.”

Both parties accused each other over social media of initiating the fight. On Feb. 16, HTS blamed the Nureddin Zengi Brigade for killing Abu Ayman al-Masri, an education official at the displaced affairs administration that is supported by HTS, and wounding his wife while they attempted to pass through a Nureddin Zengi Brigade checkpoint in Aleppo's western countryside.

In a Feb. 20 tweet from an account that is currently suspended, the Syrian Liberation Front accused Ahrar al-Sham of capturing its members at checkpoints and pointed to HTS’s offensive on a number of Syrian Liberation Front-held villages and towns in western Aleppo that wounded civilians and members of the group.