Hayat Tahrir al-Sham plots its next move in northern Syria

Hayat Tahrir al-Sham is consolidating its influence in northern Syria, mainly in Idlib, and trying to position itself as a de facto interlocutor in political agreements reshaping the country. 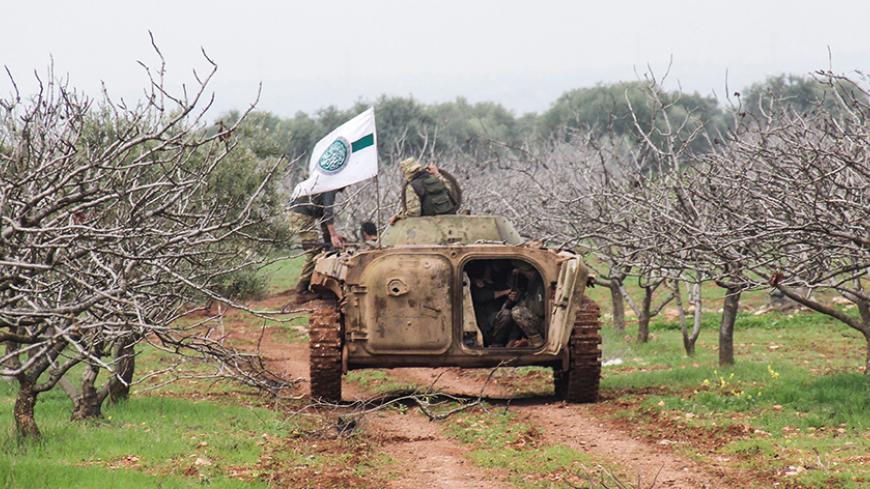 The takeover July 23 of the northern Syrian city of Idlib and several other nearby regions by former al-Qaeda affiliate Hayat Tahrir al-Sham (HTS) exposes the northern governorate to possible military operations by both Russia and the international community. The organization, which recently cracked down on its rival Ahrar al-Sham, will have to maintain a careful balancing act in northern Syria, as more radical moves could pressure the group’s internal cohesion, trigger a popular backlash and pit it against the international community, which considers it a terrorist organization. Yet the group’s aggressive behavior reflects the organization’s priority to expand its territory and consolidate its power, which would make it a de facto interlocutor in the cease-fire deals ongoing in Syria.

A string of de-escalation zones have been created in Syria with the implementation of cease-fire deals between rebels and the regime of Syrian President Bashar al-Assad — the latest enforced Aug. 3 in Homs. The plan envisions a similar deal for the region of Idlib in northern Syria. However, the recent takeover by HTS of the region may expose the governorate to possible retaliation — if not by Russia, by the international community.

The Idlib region witnessed in July fierce clashes between HTS and Ahrar al-Sham. HTS is the political spawn of the former al-Qaeda affiliate Jabhat al-Nusra, while Ahrar al-Sham was once considered one of the strongest Salafist organizations in Syria. The clashes ended with the withdrawal of Ahrar al-Sham from strategic locations in Idlib and near the border with Turkey followed by a cease-fire, which both factions have since broken intermittently.

“The situation in Idlib is being followed closely and the threat of HTS taken seriously. There is a possibility of action by the international community at a later stage, but it is unclear who will do it. For now, it is the war on the Islamic State that remains the priority,” Syria expert Samuel Heller from the Century Foundation told Al-Monitor.

The next move in Idlib by HTS could determine the group’s future survival. “The organization is the strongest faction there,” Syria expert Sinan Hatahet from the Omran Center for Strategic Studies told Al-Monitor.

However, the organization has failed to monopolize the popular vote. According to activist Brahim Idilbi, people in northern Syria have adopted a wait-and-see approach since the clashes. He told Al-Monitor, “There were protests against the group in Marat Naaman and Saraqeb as well as other regions. People are afraid Idlib will follow the destructive path of Raqqa or Mosul. They are asking for the dissolution of HTS or for the organization to direct its weapons against Assad instead of local rebel factions."

The group may face challenges within its own ranks. An Islamist Syrian source who spoke to Al-Monitor on condition of anonymity admitted that some within HTS are unhappy with the organization’s crackdown on Ahrar al-Sham and its issuance of fatwas legitimizing the killing of other rebels. The Aug. 2 statement by the US administration advised rebel factions to stay away from HTS military commander Abu Mohammed al-Golani.

Meanwhile, HTS has adopted a plan to expand and consolidate its power in northern Syria. According to an article on the news site Al-Modon, besides its growing control over Idlib governorate, HTS extended its territorial control in the southern, western and northern regions of Aleppo at the end of July.

HTS now not only controls the center of Idlib governorate, but also the border with Turkey. The region under its control stretches from Darat Izza in rural western Aleppo, crossing through Turmanin, Bab al-Hawa, Salkin to Darkoush and Khirbat Jawz in the west and Sirmaniyah to the south.

HTS’ expansion in this territory also contributes to consolidating its power by increasing its economic clout while controlling supplies that could be sent to its rivals. Thus, border areas hold both economic and strategic importance for HTS. “They allow the group to secure a continuous revenue stream [through taxes imposed on transit] and it provides it with control over the supply routes that are used by its rivals and so with significant influence over them,” Idilbi said.

Another consolidation approach used by the organization is via mergers, tactical alliances, the creation of a local administration and the issuance of fatwas. Among the prominent brigades that declared allegiance to HTS in the wake of the clashes is the Ibn Taymiyyah Mujahedeen Brigades, which controls various mountainous areas in the northwestern Aleppo countryside near the city of Darat Izza, strategically located close to the Kurdish People’s Protection Units in Afrin. According to Al-Modon, one of the most important sites in which Ibn Taymiyyah Mujahedeen Brigades is located is Jabal al-Sheikh Barakat, which has a large network of civilian and military communication towers serving the opposition areas in the north.

In addition, the organization has been able to count on local tactical alliances. For instance, the Turkistan Islamic Party fought alongside HTS in the takeover of the town of Jisr al-Shughour. Despite splitting from HTS in the wake of the clashes, the Nureddin Zengi Brigade still applauded the radical group's move to create a civil administration that would govern over the region. “HTS is working on establishing a unified civil administration, but what remains unclear is how this new administration will interact with the local councils,” Heller noted.

HTS has also extended its dominance over the region’s political scene using fatwas. On May 11, HTS stated its intention to oversee Idlib’s informal money transfer offices. By taking over the informal banking sector, HTS would have leverage over local and international charities and thus the refugee population. The organization posted on its Telegram channel another fatwa that banned the merger of groups following the defection of its ally, the Nureddin Zengi Brigade.

By taking control of Idlib and by resorting to the humanitarian argument, HTS appears to be positioning itself as an unavoidable player in northern Syria, according to Hatahet. “The organization's aim is to be removed from the terror list," he concluded.