Prisoners exchanged for evacuees from pro-regime towns in Syrian north

As part of a deal between the Syrian regime and the opposition fighters in northern Syria, thousands of government soldiers and civilians have been evacuated from the pro-regime towns of al-Foua and Kefraya in Idlib province in return for the regime's release of several batches of its detainees. 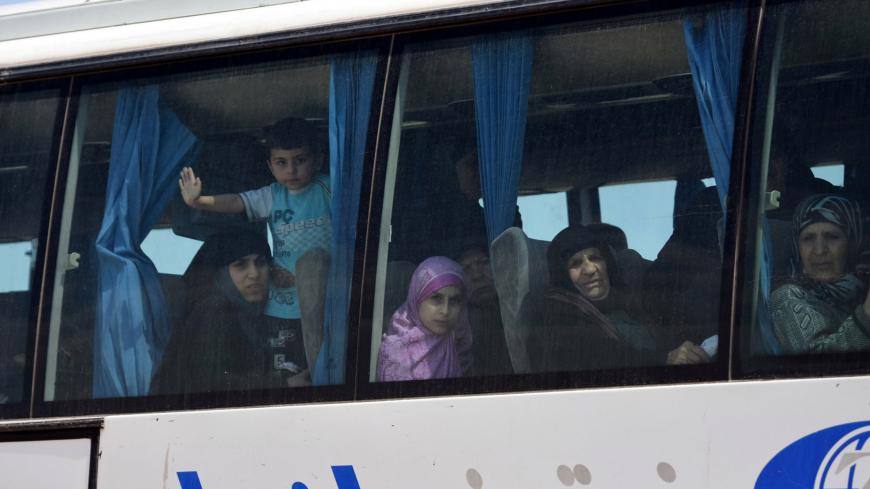 People are seen on a bus released by militants from Idlib, Syria, May 1, 2018. - SANA/Handout via REUTERS

ALEPPO, Syria — Dozens of buses transporting detainees opposing the Syrian regime arrived in Idlib July 19 per an agreement between Hayat Tahrir al-Sham (HTS) and Iranian negotiators. Under the deal, struck with Russian-Turkish supervision July 17, HTS evacuated fighters affiliated with the Syrian regime forces along with their families and civilians from al-Foua and Kefraya in the Idlib countryside. They had been besieged since 2015 by Jaish al-Fatah.

The Syrian Observatory for Human Rights stated July 19 that 120 buses left al-Foua and Kefraya with at least 6,900 people. The transportation operations took place over three phases, starting July 18. The buses headed to the crossing in al-Eiss in Aleppo’s southern countryside to enter the regime-held areas in southern Aleppo. Meanwhile, several buses transporting 1,500 detainees from Assad’s jails, including women, reached the opposition-held territories in Idlib province July 19.

The Syrian Observatory for Human Rights noted in another statement July 19 that hundreds of detainees who arrived at the opposition-held areas had been arrested in the months preceding the recent agreement. Sources told the Observatory that the regime's arrest campaign came as secret negotiations were taking place. The regime sought to use those arrested in the past two to three months to close the exchange deal between HTS and the Iranians, the source claimed. Meanwhile, dozens of protesters took to the streets of Idlib July 19, as citizens expressed their anger on finding that their arrested relatives who had been in the regime’s prisons for more than five years were not included in the exchange deal.

Imad al-Din Mujahid, the director of the HTS media office, told Al-Monitor, “The recent agreement between HTS and the Iranian enemy aims at protecting the area and expelling Iranian militias from it. The people, including civilian and military figures in the liberated Syrian north, supported this move. Negotiations regarding al-Foua and Kefraya began in 2015 and the agreement was implemented over stages. The current situation of the revolution necessitates closing this file.”

Mujahid continued, “The most important provision of the agreement was for Iranian militias and civilians wishing to leave al-Foua and Kefraya in return for releasing 1,500 detainees from the regime’s prisons. The detainees to be released were divided like so: 80% those arrested by the regime in 2018, 10% those arrested in 2017 and 10% those arrested earlier, in addition to 37 fighters taken captive by Lebanese Hezbollah” during the battles between the rebels and Hezbollah militants in Aleppo’s southern countryside in 2016.

After the buses transporting civilians and soldiers left al-Foua and Kefraya, the military factions entered and began demining operations. The Syrian Observatory for Human Rights stated July 19 that three members of military factions affiliated with the Free Syrian Army (FSA) and HTS were killed when mines planted by regime-affiliated forces blew up.

The northern areas of Syria, including Idlib and parts of the Aleppo and Hama countryside, are under the full control of the armed factions under Turkish tutelage, while the southern and central regions are controlled by the regime's forces.

Opposition activist Yoman al-Khatib told Al-Monitor, “Personally, I am against the deportations, whether by the Syrian regime forces or by the armed opposition factions. But regarding al-Foua and Kefraya agreement, we can say that it has different dimensions. I think these areas of influence are beginning to surface in north Syria between Turkey, Russia and Iran. I believe there were deals in return: the regime-controlled areas in southern Syria in exchange for the armed factions’ full control of north Syrian under Turkish tutelage.”

He added, “We reject the deportations as rebels, but I think the agreement was international, and the rebels did not have much to do with it.”

He went on, “I would have hoped that it would be a reconciliation agreement between the people of al-Foua and Kefraya, ensuring that civilians remain in their homes and militants leave wherever they want. But in the end, the militants affiliated with the regime forces in the two towns fought the uprising and launched multiple attacks previously there. All the besieged areas, either by the regime forces or by the rebels, faced great injustice. We never wanted this to happen, and we did not want any civilian in Syria to suffer under siege.”

Armed factions had repeatedly used the pro-regime towns as a pressure card on the regime. In 2015, the Four Towns Agreement (al-Foua, Kefraya, Madaya and Zabadani) was signed between Jaish al-Fatah and Iran. The agreement stipulated a halt to military operations in Madaya and Zabadani, which were under the joint control of the FSA and Jaish al-Fatah, allowing the entry of aid and evacuation of the wounded.

The agreement later included other sites besieged by the regime like the Yarmouk camp and the western Qalamoun region in Rif Dimashq. The factions’ members and civilians were allowed to retreat to north Syria in exchange for evacuating civilians and wounded from al-Foua and Kefraya to regime-held areas.

As the last convoy left the two towns, a chapter in the war has closed.