Why was deal to evacuate Syrian towns brokered by Qatar and Iran?

A deal brokered by Qatar and Iran that ignores Turkey and Russia — the largest respective sponsors of the opposition and the regime in Syria — threatens to derail broader peace talks aimed at ending the tragic civil war. 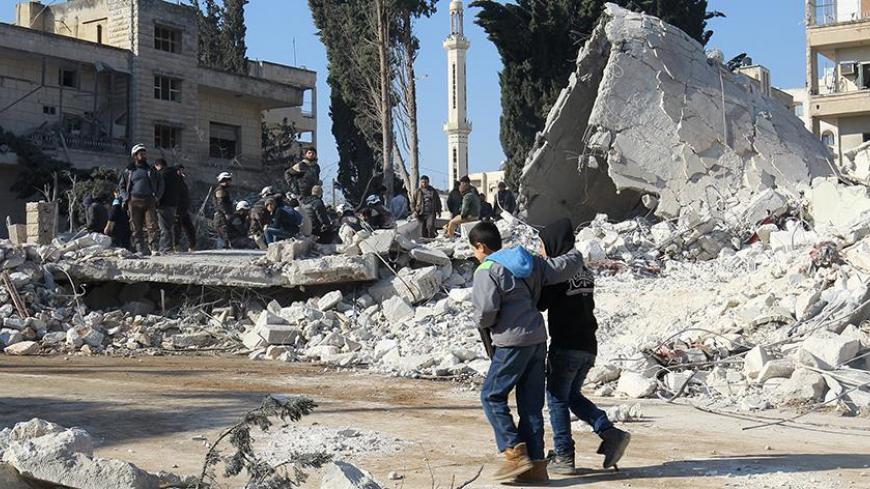 Boys walk at a site hit by airstrikes in the rebel-held city of Idlib, Syria, Feb. 7, 2017. - REUTERS/Ammar Abdullah

The evacuation of four Syrian towns that have been besieged since 2015 began on April 4 in a sectarian fashion. While civilians and opposition fighters will leave the towns of Madaya and Zabadani near Damascus, residents of al-Foua and Kefraya, two government-held towns located in the province of Idlib, will be given safe passage. The Sunnis will be transported to rebel-held Idlib and the Turkish-controlled town of Jarablus in the north, while the Shiites will be taken to the government-controlled areas of Damascus. The evacuation is scheduled to last 60 days. To make it possible, a truce will take effect in the areas south of Damascus and in several parts of Idlib province. The cease-fire will allow aid to be delivered. In addition, the deal will also see the Syrian government release 1,500 prisoners.

At first glance, the evacuation seems like a logical and expedient step in the way events have been unfolding. Opposition fighters and their families have recently been taken from the city of al-Waer in Homs province to Jarablus. The current deal, however, was different. The Syrian Observatory for Human Rights and other sources reported that Hayat Tahrir al-Sham (HTS) plus Hezbollah and Iran's Islamic Revolutionary Guard Corps reached this agreement on March 28 with mediation from two external players, Iran and Qatar.

Doha played an unusual role as an intermediary in the new deal. At least several sources confirmed to Al-Monitor that on March 26, Hussam al-ShafiI (also known as Zaid al-Attar), spokesman for Jabhat Fatah al-Sham and political chief of HTS, visited Qatar to strike the deal.

Given the still-relevant Astana process, the deal may have looked suspicious to Moscow because the Syrian conflict was discussed without Turkey or Russia. Theoretically speaking, Russian and Turkish authorities should find it alarming, as the talks were unexpectedly held elsewhere rather than at the traditional venue of Istanbul or Ankara.

Mind that the Shiite villages, which have openly supported Hezbollah, have been the opposition's trump cards since the territory was encircled in March 2015. Iran and its allied Shiite groups have long been trying to strike a deal with Ahrar al-Sham for a cease-fire to begin and for aid deliveries to reach the villages. Al-Monitor sources in Idlib province claim that Abdullah al-Muhaysini, a prominent Saudi cleric and jihadi figure in HTS, has been an informal custodian of al-Foua and Kefraya even though he has aired contradictory views in public. In particular, he stated in January 2016 that unless the Madaya siege was lifted, al-Foua should be "exterminated." Claims of "custodianship" may prove to be true as Muhaysini's address to the opposition called for sparing Christians after the fall of besieged Aleppo. One might see it as part of the strategy to integrate the al-Qaeda branch into the Syrian opposition.

The Russian-Turkish agreements provided for the evacuation of the opposition from eastern Aleppo to Idlib in December 2016. However, Iran demanded a reciprocal step to bus the residents out of al-Foua and Kefraya. Back then the evacuation was halted as extremists hijacked and burned six buses collecting villagers. The Aleppo evacuation later resumed, with several thousand people taken away from the villages.

Some Russian experts treated the evacuation deal brokered by Qatar and Iran as unambiguous evidence of Doha's sponsoring of HTS extremists. It is up to investigatory bodies to file charges, but one should not be oblivious to the heterogeneous nature of the HTS. It comprises many Syrians opposed to negotiations with President Bashar al-Assad's regime, as well as former — and, above all, Salafi — factions of Ahrar al-Sham. By shoring up Ahrar al-Sham, Qatar enjoys ample opportunity to enter into a direct dialogue with HTS, even though the two groups are vying for power and survival in western Syria.

Russian officials, who have not commented on the issue so far, are likely to disregard it altogether as a local case. However, as mentioned earlier, such arrangements create a precedent for Iran to employ its own stratagems in Syria. As far as we can judge, Iran's strategy is at odds with Moscow's interests.

Back in September 2016, when Russia and the United States agreed on a cease-fire deal for Syria, Al-Monitor's sources close to Russia's security organs did not rule out Tehran's subtle sabotage because the agreement aimed to strengthen Russia's standing in Syria. These concerns have become conspicuous in 2017. Actually, long-term settlement and political solution do not benefit Iran since any reform will reduce its political and military influence in Syria. In this regard, Iran's position is close to that of HTS militants, a factor that directly affects the truce. Meanwhile, Moscow and Ankara literally imposed the Astana process on Tehran by including the armed opposition.

Understandably, Russia does not dwell on it, but it was Syria's "war party" and its Iranian sponsors that, from the outset, sought to maximize their advantage of the cease-fire, if not break it. Since early January, governmental forces and Hezbollah have been waging military operations to eject the opposition from enclaves outside Damascus under the pretext of combating Jabhat Fatah al-Sham. Ahrar al-Sham, which refused to engage in the Astana talks amid the regime's continued fighting in the Wadi Barada valley, made that clear.

At the same time, the Syrian regime has allegedly contaminated with diesel the pumping station that provides most of the capital's water. Moreover, the real number of Jabhat Fatah al-Sham militants operating in the valley does not exceed several dozen. In addition, the Hezbollah militia barred Russian troops that were authorized to oversee the cease-fire from entering the besieged Wadi Barada area.

Such incidents along the front line, together with HTS provocations, compelled Jaish al-Islam and Ahrar al-Sham to respond and engage in anti-regime offensives. It stands in the way of a new round of the Astana talks, which will be pointless without the opposition.

Against this background, the Iran-Qatar deal seems somewhat controversial. Absent Moscow and Ankara, talks can throw an additional curveball at the negotiating process between the opposition and the regime. Further details of the accord may disprove the information about the bilateral negotiations behind Russia's and Turkey's back. In any case, the situation is testament to a possible compromise between unexpected players. More significantly, such agreements should be reached in presence of the allies and should be consistent with the settlement strategies.