While laying waste to Kurdish villages in Afrin, Turkey is also positioning itself as a shield between the Syrian army and opposition forces. 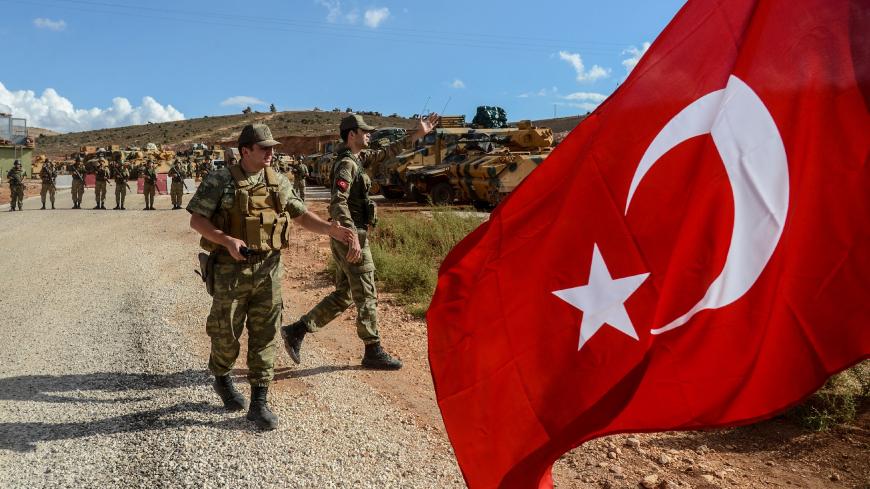 Turkish soldiers stand near armored vehicles as a man waves a Turkish national flag during a demonstration in support of the Turkish army's Idlib operation near the Turkey-Syria border, Hatay, Turkey, Oct. 10, 2017. - ILYAS AKENGIN/AFP/Getty Images

Idlib province was designated one of four de-escalation zones during negotiations last year aimed at ending the Syrian civil war. But two contradictory developments are taking place there.

For a deconfliction zone, it's quite conflicted.

In one development, opposition groups that Turkey actively supports are fighting to keep the Syrian army from moving inward, from north of Hama and south of Aleppo. In the other development, as part of a plan to lower tensions by deploying military observers, Turkey is trying to position itself as a barrier between the Syrian army and opposition groups. In other words, Ankara is provoking fights but also trying to lower tensions.

There's a lot of confusion. If Turkey is coordinating with Russia, why is the Syrian army trying to keep Turkey from deploying troops? Isn’t there an accord between Damascus and Moscow? Or is Turkey choosing to interpret the deconfliction zone plans according to its own interests?

While the focus was on the Turkish Armed Forces’ (TSK) Afrin operation, Turkey made a second move, at Idlib. The whole thing would have gone virtually unnoticed by the rest of the world had Turkey's military column not been attacked.

First, on Jan. 24, a six-vehicle TSK reconnaissance team checked out Tel al-Ais, southwest of Aleppo. On the night of Jan. 29, a 100-vehicle convoy that included 15 transporters loaded with tanks entered Idlib and then moved toward Tel al-Ais.

The Turkish column had entered Idlib after reaching an agreement with the dominant Islamist coalition, Hayat Tahrir al-Sham (HTS). But the forces had to halt between Al Tawam and Kafr Kermin when they detected shelling ahead on their route. According to the Syrian Human Rights Observatory, the Syrian army and other pro-regime forces based at Hazir shelled the Kammari area with artillery and rockets to prevent the Turkish column from advancing. Two Turkish jets entered Syrian airspace to protect the Turkish column but left without any engagements.

The Turkish column pulled back to Kafr Kermin to spend the night. It resumed its movement about 10 hours later but was attacked with an explosive-packed vehicle at the entrance of Atarib. The TSK said a civilian was killed and a soldier and a civilian technician were wounded. The TSK blames the attack on the Kurdistan Workers Party, which Turkey considers a terrorist group.

Sheikh Abdullah al-Muhaysini, a Saudi-born leader of the jihadist movement in Syria, accused his own wing, saying, “A Turkish convoy enters the Hayat Tahrir al-Sham-controlled area as a result of an agreement. Then [HTS] attacks that convoy with a bomb-laden vehicle. Such a despicable action can only be carried out by those bereft of religion and ethics.”

On Jan. 31, there were unconfirmed reports of the Turkish military convoy moving again. The Syrian army does not appear to be guided by the Putin-Erdogan accord, as it continued to pound the positions of opposition forces. As of Feb. 1, the Syrian army had reached to within 16 kilometers (10 miles) of its primary target at Serakib and 30 kilometers (18 miles) of the besieged Shiite towns of Fua and Kefraya.

An agreement reached during peace negotiations last year in Astana, Kazakhstan, divides Idlib into three areas: The first one, east of the railroad, will be cleared of armed groups and put under Russian supervision as a demilitarized zone. Civilian administration here will be by local councils. West of the railroad will be under Turkish observation. The area between a major highway and Turkish border will also be under Turkish control. Groups supported by Turkey will settle in the third area until a political settlement is reached. The midsection between the railroad and the highway is called the second area. Al-Qaeda-linked HTS — which is not participating in the cease-fire — will be confined to this part.

Since Dec. 26, the Syrian army has effectively gained control of the first area by entering at least 120 settlements along the Aleppo-Damascus international highway. (There is, however, a part where the Islamic State is reorganizing.) Opposition forces say this is a crude violation of the Astana agreement.

Armed groups apart from HTS initiated an operation Jan. 11 to recover some of the area lost to the Syrian army. There was a crescendo of accusations that Turkey was playing a “double game” when it became known that the opposition groups were using armored vehicles supplied by Turkey about five months ago. Many groups that participated in Turkey’s Afrin operation, some of which are affiliated with al-Qaeda and the Taliban, also took part in this new offensive.

Turkey's support of this operation could be interpreted as Ankara forcing Damascus to heed the Astana process, as well as Ankara’s intention to keep playing the double game with these groups. If Afrin falls, it will give these groups considerably more room to maneuver. This is the way many people read Turkey’s intention of deploying at Tel al-Ais.

Tel al-Ais is part of another de-escalation zone, east of the Damascus-Aleppo highway. If reports are accurate, Turkey would be violating the Astana agreement.

Tel al-Ais is about 1 kilometer from Hazir, where the Syrian army and its allies had made a forward base toward Serakib and Fua-Kefraya. Tel al-Ais is an important area of the Damascus-Aleppo M5 international highway. The critical question now is, if Turkish troops are deployed at Tel al-Ais, will the Syrian army give up its objectives of reaching Fua and Kefraya and clearing the highway of hostile elements? The desire of the Iranian troops accompanying the Syrian army to break the sieges of Fua and Kefraya make it unlikely they would stop.

The Syrian regime wants to open the Aleppo highway and has been trying to capture Tel al-Ais for the past two years. The highway, which reaches Aleppo via Dara, Damascus, Homs and Hama, is still beyond the army's control at Han Seyhun, Maarat al-Numan and Serakib. This broken line also marks the boundaries of the third area allotted to Turkey. The highway was cut at the rural terrain of Hama, but that was recently cleared. The highway is also threatened by armed groups around Harasta in the rural periphery of Damascus.

Sources close to the Syrian regime fear the road will now be dominated by the Turkish army.