The following weeks will be crucial for Turkey, Russia and the Syrian government as Idlib escalation threatens to provoke an all-out confrontation between Ankara and Damascus. 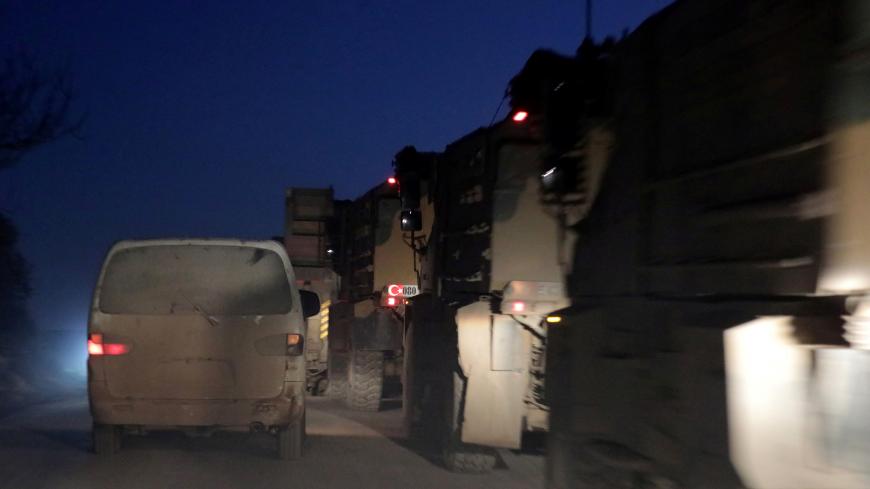 The window for a political solution between Turkey and Russia over Syria’s Idlib is narrowing as the Syrian regime forces’ push to capture the country’s last rebel-held stronghold has left 13 Turks dead in seven days.

Turkey, meanwhile, is determined to keep its troops on the ground at any cost, even after the Feb. 10 attack by the Syrian regime that killed five Turkish soldiers and wounded five others.

Forces loyal to Syrian President Bashar al-Assad, backed by close air support from Russian and Syrian fighter jets, continue their advances toward Idlib’s city center through the strategic town of Saraqeb, which fell under regime control last week. Pressing from the north, pro-Iranian militias are also heading toward the province from western Aleppo.

Turkey, for its part, is steadily increasing boots on the ground. As of Feb. 10, it has dispatched an excess of 100 military convoys to the area. In its bid to fortify ​Idlib’s defenses from the south and eastern fronts, this marks Turkey’s largest military buildup in the area since 2011. Currently, the number of Turkish soldiers in the area has reached some 9,000, with one armored brigade, two mechanized infantry brigades and a special forces team equipped with several howitzers and rocket launchers.

In response to growing Turkish activity in the region, Assad’s forces struck a Turkish military post near the northwestern Syrian town of Taftanaz Feb. 10, killing five Turkish soldiers and wounding five others. With this strike, Turkish casualties from Syrian regime attacks reached 13, including the killing of eight Turks Feb. 3 near Saraqeb.

The number of Turkish observation posts under siege by the Syrian regime have also increased to seven with the fall of Tell Touqan, al-Ais and Saraqeb. Turkey had set up 12 military posts in and around Idlib as part of a de-escalation deal between Ankara and Moscow in 2018.

Despite such deadly confrontations, why does Turkey insist on keeping troops in the area? Ankara’s strategy is simple: Turkey is increasing its military presence in and around Idlib as coercive diplomacy to force Russia to take action against the Syrian regime’s aggression.

Turkey is certain that the Idlib problem will eventually be solved through tough negotiations. Thus, in a bid to protect its interests in other parts of Syria, Ankara is raising the stakes on the ground by increasing troops in an area where it does not control airspace.

Turkey is aiming to achieve two goals with its risky strategy. First, it is trying to force Moscow to set up a new negotiation table for a truce in Idlib. Second, once the table is set, it plans to ask for Russian assurance that the Syrian regime will allow Turkey to maintain its military presence in Afrin as well as the pocket of Jarablus, al-Rai and al-Bab.

The nightmare scenario for Turkey is losing the northern areas that came under its control through its Operation Euphrates Shield in 2017 and Operation Olive Branch in 2018. The Syrian regime might indeed turn to opposition-held Afrin and the Euphrates Shield area after securing Idlib’s center.

To convince Russia to sit at a negotiation table for a cease-fire, Turkey has no option but to increase its military presence in Idlib to pressure Moscow at the expense of risking the lives of the Turkish troops.

Tensions between Turkey and Russia escalated last week after a roadside bomb killed four Russian operatives Feb. 1 in northern Idlib, which is controlled by the Turkey-backed Free Syrian Army. Furthermore, eight Turkish military personnel were killed in a shelling by the Syrian regime Feb. 3.

A Russian delegation arrived in Ankara Feb. 8 for de-escalation talks, but the attack on a Turkish position in the northwestern Syrian town of Taftanaz came the second day of the talks, dashing hopes of a cease-fire, at least in the short run.

Of note, the presence of four generals from Turkish air and land forces at these meetings indicates the high degree of importance Turkey attaches to military coordination with Russia.

In the first round of talks Feb. 8, the Turkish side reiterated its determination to push back Syrian regime forces if they refused to withdraw from the de-escalation zone in Idlib by the end of February, a deadline set by Turkish President Recep Tayyip Erdogan Feb. 5.

Ankara is also testing the grounds for a possible new summit between Russia, Iran and Turkey to speed up the political process before Assad's forces reach Idlib's center. Turkish presidential spokesman Ibrahim Kalin said, “A new round of Astana talks might be held in March,” referring to the Syrian talks initiated in the Kazakh capital three years ago.

Yet how President Vladimir Putin will react to Turkey’s coercive diplomacy is unclear.

Whether Putin is ready for a face-to-face meeting with his Turkish counterpart is an open question, given the Russian leader's frustration over failing to achieve a rapprochement between Ankara and Damascus after the much trumpeted meeting between Turkish and Syrian spymasters in Moscow Jan. 23.

If Erdogan and Putin meet, Erdogan will probably demand to maintain Turkey’s control over the Euphrates Shield area and Afrin in northern Syria in return for withdrawing Turkish troops from south of the strategic M4 and M5 highways.

Ankara is also looking for ways to keep Idlib’s center under Syrian opposition control, yet Assad's forces are now only 10 kilometers (some six miles) from their target, the closest distance they have been since 2012. The negotiation table is unlikely to be set up until Damascus reaches its target, while Moscow tries to buy time on its behalf.

Aside from confronting the enemy, the protection of troops has become a challenge without close air support in Idlib. This is particularly true for Turkish troops, as the Assad regime is determined to raise the cost for Turkey.