Turkey’s attempt to test the waters by leading a push by the Syrian rebels has shown that Russia is apparently strongly determined to support the regime. 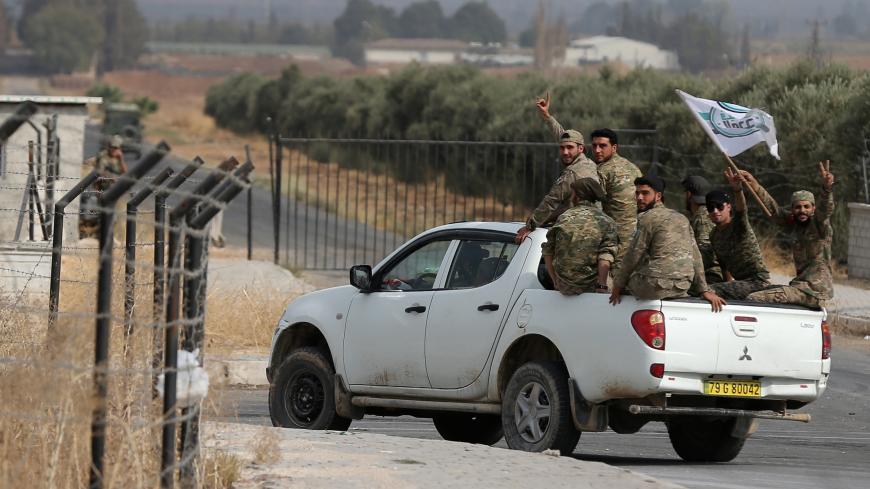 Turkish-backed Syrian rebels ride a vehicle on a street in the Turkish border town of Akcakale in Sanliurfa province, Turkey, Oct. 16, 2019. - REUTERS/Stoyan Nenov

The latest Turkey-led push by the Syrian rebels is intended to test the power of the Syrian government's troops on the ground and the limits of Russian support to Syrian President Bashar al-Assad. So far, the results do not seem promising for Ankara.

Following futile talks between Turkey and Russia over the escalation in northern Syria, Turkey-backed Syrian opposition factions launched an offensive against Assad’s forces on Feb. 20 to capture southeastern Aleppo town of Nayrab.

Hours later, an airstrike killed two Turkish soldiers, wounding five others. It remains unclear whether the strike was launched by a Syrian or a Russian fighter jet. Russia announced the troops were hit by a Russian jet while the Turkish Defense Ministry put the blame on the Syrian government forces. The intense clashes in the area are ongoing as of Feb. 21.

The recent offensive showed that Russia is determined to provide air and ground support to Assad’s forces under any circumstances.

The talks between Turkey and Russia seem to have reached a dead end, with the Turkish side rejecting Moscow’s offer and conditions. Russia reportedly asked Turkey to immediately withdraw from the Idlib observation posts set up as part of a 2018 de-escalation deal between the two sides. Turkey was asked to hand over all the military checkpoints on the main supply routes connecting Turkey to Idlib and Afrin to Idlib and to cleanse Idlib city of all opposition and jihadi elements.

In return, Russia is said to have proposed that Turkey set up a safe zone 15 kilometers (nine miles) deep along the Turkish border to host an estimated 1.5 million refugees amid the regime's ongoing operation to capture the shrinking last rebel bastion of the war-torn country.

The Russian offer would cost Turkey all of its gains in Idlib and western Aleppo, leaving only a small area to accommodate the refugees. Turkey is pressing for a safe zone 30 kilometers (18 miles) deep along the border. “We would like to build barracks in this zone,” Turkey’s President Recep Tayyip Erdogan said Feb. 21.

Regardless of several risks, Turkey will probably continue to dispatch more troops to the area in a bid to force Moscow to return to the negotiation table or perhaps to a multi-party summit, as part of the recent joint French-German efforts.

Following a conference call between the Turkish, French and German leaders, Erdogan said Feb. 21 that a four-way summit could be held in Istanbul in early March. Yet Putin did not agree to the summit during a near-hour-long phone conversation between him and Erdogan on the same night that yielded no concrete results.

“We do not have any intention to withdraw [from northern Syria] until the atrocities stop,” Erdogan said before the call, indicating that Turkey will do anything in its power to strengthen its hand before sitting at the table.

His remarks came a day after the Turkey-backed armed opposition Sultan Murad Division and Hamza Division began advancing toward Nayrab, where a Syrian helicopter was downed by the rebels on Feb. 12. Turkish commando units directed the fighters from behind. The push began around 9 a.m. and Nayrab became the scene of intense clashes that are still going on as of this writing.

According to official statements and news reports, the clashes began when the rebels targeted a Russian Su-24 fighter jet northeast of Nayrab by short-range air defense systems. In turn, a fighter jet hit a Turkish position in the area, killing two Turkish soldiers, wounding five. Turkey didn’t medevac its wounded soldiers, transporting them in ambulances instead, indicating that Russia denied Turkey the use of Idlib’s airspace even for the transportation of injured soldiers.

Subsequently, the Russian Defense Ministry released a video of Turkish self-propelled gun units targeting Syrian government troops. The unprecedented move was clearly intended to notify Turkey that the movements of its armed units are closely monitored by Moscow. The release of the aerial footage also signals Moscow’s determination to support the Syrian army against the rebels.

Russia has apparently chosen sides in the direct confrontations on the ground. Its response to Turkey’s attempt to test the waters was loud and clear and its determination seems to have surprised Ankara. The test also revealed the weakness of Turkey’s position in Idlib with little to no air defense.

Thus, at this point, Turkey is forced to rely on itself. It might opt to challenge Russia's control of Idlib’s airspace by using Turkish-made short-range air defense systems or radar jammers.

The Idlib escalation could bring ties back to the crisis mode of 2015 when Turkey shot down a Russian jet.