Clashes in northern Syria drift from Idlib to Aleppo

As the Idlib escalation winds down to a stalemate between Syrian President Bashar al-Assad’s forces and Turkish troops, the clashes are shifting to Aleppo. 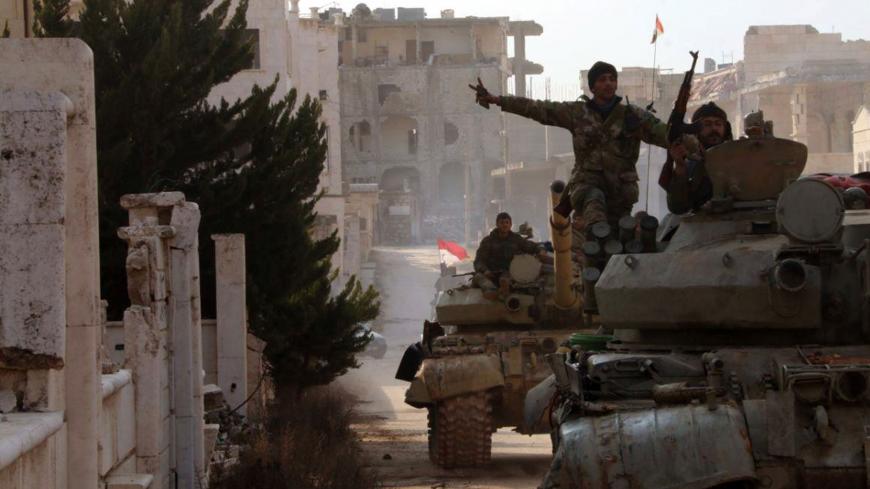 The epicenter of the clashes in northwest Syria seems to have shifted away from Idlib as Russian-backed Syrian government forces have concentrated their efforts on western Aleppo. The Syrian regime is striving to outmaneuver Turkey by triggering a mass refugee flow into the country.

In response, Turkey threatened the Syrian regime. “These are our last warnings, the final countdown has begun,” Erdogan said Feb. 19, addressing his parliamentary group. “The operation in Idlib is imminent.”

Syrian government forces have captured some 20% of the territory in Idlib and some 15% of the territory in Aleppo since early February despite Turkey’s massive build-up in the region to counter the offensive. The clashes were mainly concentrated on Saraqeb, some 20 kilometers (12 miles) southeast of Idlib city, Feb. 3-12.

The shift toward western Aleppo, where the situation has been relatively stable since 2012, came after Turkey-backed Syrian National Army (SNA) factions downed a regime helicopter near Nayrab on Feb 12.

President Bashar al-Assad's forces and pro-Iranian militias have unexpectedly begun advancing toward western Aleppo to capture Atarib, a town on the road to Bab al-Hawa, the main supply crossing on the Turkish border. The Syrian government forces seem to have two goals with the surprising move: Cutting the main supply routes connecting Turkey to Idlib and Afrin to Idlib as well as capturing the northwestern Syrian village of Barisha to monitor the activities of the Turkish troops and force Syrian refugees along the border area into Turkey. Some 600,000 refugees have now piled up along the border region.

Turkey seems to be determined not to open the border crossings and to press for a safe zone inside Idlib city that would be large enough to house all refugees in the area. It is proceeding with the reinforcements regardless of the risks to strengthen its hand at the negotiation table.

Most recently, Turkey dispatched an armored commando unit to western Aleppo to shield Atarib city and built up two military checkpoints on the main road connecting the region to Atarib.

On Feb. 14, Turkey-backed SNA fighters shot down a Syrian helicopter in western Aleppo, further escalating the clashes. In response, Russian SU-35 fighter jets and regime forces shelled rebel positions in the area on Feb. 15. The intense clashes almost paused on Feb. 16, a day before the meeting between Turkish and Russian authorities in Moscow on Feb. 17. Yet the sides failed to reach a compromise and the clashes resumed on Feb. 18.

The disagreement between Moscow and Ankara mainly stems from differing interpretations of the 2018 Sochi agreement.

Turkey argues that Moscow is not upholding the second article of the deal, which calls for Russia to maintain the cease-fire in and around Idlib by taking “all necessary measures” to prevent “military operations and attacks.”

According to Turkey, Russia is to be held responsible for preventing offensives by Assad's forces in Idlib, yet the Syrian regime forces have been violating the cease-fire since 2019. Particularly since May, Moscow seems to have ended efforts to restrain the Damascus administration, paving the way for the recent offensive. Turkey claims Russia’s indiscriminate bombardment of civilian targets including hospitals and marketplaces constitutes another violation of the article.

Moscow, in response, is focusing on the 10th article of the deal, which calls for fighting terrorism in Idlib’s de-escalation zone. According to Russia, the presence of the jihadi elements on the ground legitimizes the Syrian government forces’ offensive, nullifying the cease-fire. Thus, at the heart of the conflicting views lies different interpretations of the Sochi deal.

So what military strategy is left open to Turkey?

Turkey’s tactic of relying on the SNA factions as the main line of attack seems not to be working, with the factions unable to act as a united force due to their internal disputes and lack of command mechanisms.

Meanwhile, some 10,000 Turkish troops and regime forces on the ground seem to be avoiding a decisive engagement over Idlib city. Since Turkey doesn’t control the airspace there, the Turkish troops are trying to keep up the pressure on regime forces through heavy artillery, mortar and rocket fire. Assuming that Turkey will not venture a full-scale attack on Assad’s forces, Moscow probably considers Turkey’s President Recep Tayyip Erdogan’s feverish statements to be intended for domestic consumption.

“If the slightest harm is dealt to our troops at the observation posts or anywhere else, we will hit the regime forces anywhere, without limiting ourselves to Idlib,” Erdogan said Feb. 12, signaling that Turkey’s top condition for de-escalation is the safety of Turkish troops. The Turkish death toll in the last rebel bastion has reached 14.

The military situation on the ground is shifting to a stalemate in Idlib city. Yet, should the regime forces’ push continue, Turkey seems to be ready to escalate the situation in western Aleppo by heavily reinforcing the region between the Turkish border and Atarib.