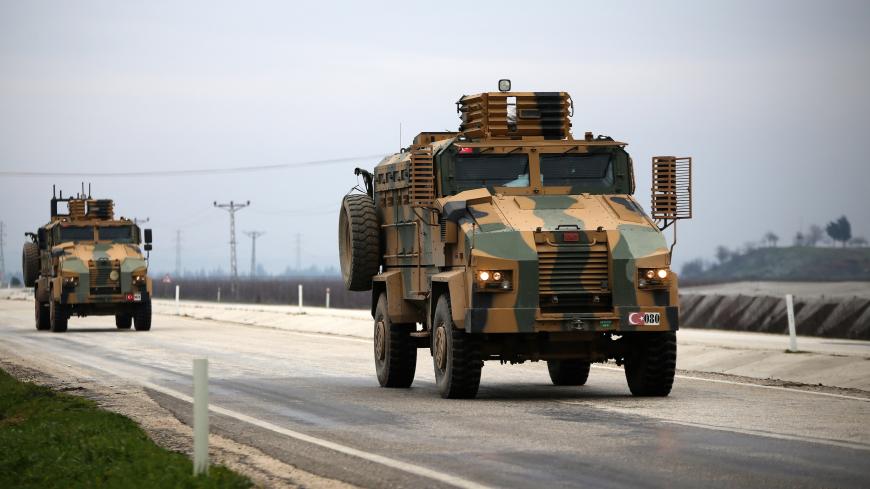 ISTANBUL ­— Turkish President Recep Tayyip Erdogan doubled down on threats to retaliate against Russian-backed Syrian forces in Idlib, where an ongoing government offensive has escalated tensions between Ankara and Damascus.

“If any harm comes to our troops at the observation posts or anywhere else, we will hit the regime forces anywhere, without limiting ourselves to Idlib and to the boundaries of the Sochi Memorandum,” Erdogan said Wednesday during a Justice and Development Party (AKP) meeting in the Turkish capital.

He added that Syrian regime forces must pull back beyond Turkish observation posts by the end of month, returning to boundaries set by the Sochi agreement in an effort to stem violence that has sent hundreds of thousands of civilians fleeing for safety along the Turkish border.

“To achieve that, we will do whatever is necessary on the ground and in the air without any hesitation and without allowing any stalling,” Erdogan said.

Responding to the statements, a Syrian Foreign Ministry official said Erdogan was “disconnected from reality” and that his comments “only reveal ignorance in threatening to hit Syrian army troops.”

The Russian Defense Ministry said in a statement, “Statements by Turkish representatives about alleged attacks by Russian forces on civilians in the Idlib de-escalation zone do not correspond with reality.” It went on, “The real reason for the crisis in the Idlib de-escalation zone unfortunately is the non-fulfilment by our Turkish colleagues of their undertakings to separate moderate opposition militants from terrorists.”

The taunts come as Ankara officials seek to avoid an influx of new refugees. Turkey currently hosts more than 3.7 million Syrians and their impact on the labor market is believed to have cost the ruling AKP votes in the 2019 municipal elections.

Meanwhile, US special envoy for Syria James Jeffrey arrived in Ankara Tuesday night to evaluate developments in Syria with Turkish counterparts. Speaking to the Turkish press, Jeffery reaffirmed previous statements by US Secretary of State Mike Pompeo, underlining Washington's support for Turkey, “a NATO ally,” he said in Turkish, despite recent tensions between the two nations.

More than 5,000 Turkish troops and heavy artillery have entered Idlib over the last week as reinforcement for observation posts and military positions in an effort to de-escalate fighting in Idlib and stop the loss of territory held by opposition rebel groups, some of which are backed by Ankara.

Turkish Defense Minister Hulusi Akar told the Associated Press that at least four of 12 observation posts in Idlib are now in Syrian government-controlled territory, along with two Turkish military positions.

Akar echoed Erdogan’s statements that his troops would respond “even more powerfully” to Syrian regime attacks, and reiterated that Turkish soldiers would not pull back from the M5 highway, a key land route connecting Damascus and Aleppo over which Assad forces recently took control.

Though the highway was included in a rebel-held area delineated by 2018 cease-fire accords between Ankara and Moscow, Russian leaders have supported recent gains by Syrian troops, claiming Turkey did not uphold prior commitments to remove extremist rebel factions from Idlib.

In a phone conversation between Erdogan and his Russian counterpart Vladimir Putin Wednesday, the two discussed the “aggravation of the situation” in Idlib and said they would work toward the “full implementation” of prior cease-fire agreements to limit further escalation.

Russian and Turkish officials will hold high-level talks on Idlib soon, though no date has been set

Nigar Goksel, Turkey project director for the International Crisis Group, said the discord stemming from developments in Idlib may eventually require Ankara and Moscow to renegotiate prior cease-fire arrangements to reflect the new reality on the ground.

“It appears Ankara and Moscow are trying to box each other in as much as they possibly can, but it doesn’t seem like there’s any other option apart from a new cease-fire [agreement],” Goksel told Al-Monitor.

Taking a tougher stance on the issue, Nationalist Movement Party leader and close Erdogan ally Devlet Bahceli said Turkey should reassess its relations with Russia after the clashes between Turkish and Syrian forces.

“Assad is a murderer, criminal, illegal and a source of strife," Bahceli said during a speech in Ankara Tuesday. "If necessary, the Turkish nation should plan to enter Damascus.”

The statements were not supported by most Ankara lawmakers, many of whom have sought Western and NATO backing to contain and de-escalate the conflict in Idlib. Pervin Buldan, co-leader of the pro-Kurdish People's Democratic Party, said Turkey should fully withdraw from Syria and leave the fate of the nation to its citizens.

Reflecting on recent developments, Fabrice Balanche, an associate professor at the University of Lyon 2 and adjunct fellow at The Washington Institute, said he did not expect a serious escalation between Turkish and Syrian troops due to Russian leverage on both sides.

Most likely, Balanche said, Ankara may seek to fortify key observation posts, such as in Taftanaz — which has access to a military airport — while withdrawing from positions taken over by regime forces.

Regarding the humanitarian crisis on the Turkish border, Balanche added Turkish officials may seek to relocate displaced Syrians to areas controlled by Turkey-backed troops in northeast Syria, but the process of transferring civilians may prove challenging.

“To relocate the refugees to northeast Syria, Erdogan needs to take Kobani [for] territorial continuity between Jarablus and Tall Abyad,” Balanche told Al-Monitor. “If he tries to send refugees to Tall Abyad and Ras al-Ain through the Turkish territory, people could decide to stay and not go back [to Syria]. And according to international law, displacement through Turkish territory would not be acceptable.”

For the time being, he said Ankara officials might seek concessions from Moscow to gain more territory within Syria. Yet Russian officials are currently coordinating talks between Damascus and Syrian Kurds as Assad seeks to regain all territory lost in the nine-year-old conflict.

In this process, Balanche said Moscow may use the threat of another Turkish operation in northeast Syria to pressure Kurds to reunite with the Syrian regime and cut ties with remaining American troops in Deir ez-Zor.

“If [Erdogan] is making a lot of noise, it’s because he wants something, but the problem is that Russia doesn’t want to give him Kobani or Kurdish territory” Balanche told Al-Monitor.

He added, “If Russia gives something to Turkey now, the situation with the Kurds is finished. So, I think in two or three months, if there is no progress in negotiations between Russia and the Kurds and American troops are still in Deir ez-Zor, Kurds could lose more territory.”