Turkish President Recep Tayyip Erdogan said Ankara will retaliate if Syrian regime forces do not pull back from Turkish observation posts in Idlib by the end of the month. 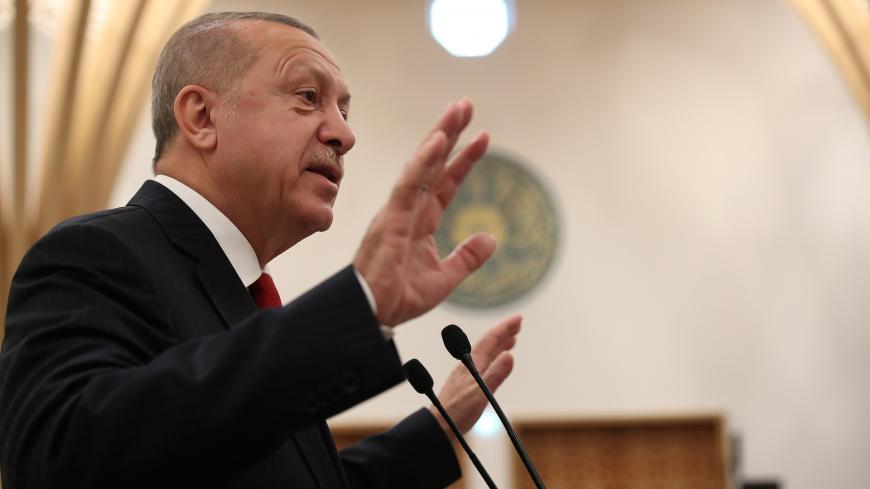 ISTANBUL — Amid an ongoing offensive in Idlib that has displaced half a million civilians, Turkish President Recep Tayyip Erdogan threatened to act against Russian-backed Syrian forces if they did not fall back from Turkish observation posts by the end of the month.

“We want the regime to immediately retreat to the borders stipulated by the Sochi agreement — in other words, to retreat behind our observation posts,” Erdogan said in the Turkish Parliament Wednesday.

He added that if the forces failed to pull back from 12 Turkish observation posts, two of which have been surrounded by Syrian troops, “Turkey itself will have to take over the matter.”

It is the latest development following Monday’s clashes between Turkish and forces loyal to Syrian President Bashar al-Assad that left at least eight Turkish soldiers and 13 Syrian soldiers dead. The statement comes as a Syrian offensive has increased tensions on the ground in Syria while straining diplomatic relations between Ankara and Moscow, who have sought to de-escalate fighting Idlib, the last rebel-held enclave in the nation’s nine-year-old conflict.

Citing repeated infringements of the 2018 Sochi memorandum of understanding between Ankara, Moscow and Tehran, Erdogan said Turkish forces were running out of options if they wanted to stop the violence and a possible mass exodus of refugees to Turkey from Idlib, home to about three million civilians.

In a phone conversation Tuesday with Russian President Vladimir Putin, the Turkish leader relayed his frustrations over the failing cease-fire initiatives brokered between the two nations. In response, Putin said Ankara had not held up its side of the Sochi agreement by failing to remove terrorist groups from the de-escalation zone, according to a statement by the Russian president’s office.

Aaron Stein, director of the Middle East program at the Foreign Policy Research Institute, said an Idlib offensive has been “pre-ordained” since the signing of the MoU and while conditions were not met by both sides, Turkish intervention did delay the movements currently being taken by Syrian regime forces.

Among the agreement’s key terms were the reestablishment of regime access to Syria’s M4 and M5 highways as well as the removal of extremist militants linked to Hayat Tahrir al-Sham from Idlib by the end of 2018.

“Neither of those have happened,” Stein told Al-Monitor. “I think we’re just at the point where Russia can’t delay any longer and decided to move ahead.”

In recent weeks, Syrian forces have captured the Idlib city of Maarat al-Numan and are expected to move north toward Saraqib in an effort to secure access to the M5 highway linking Aleppo and Damascus.

Turkish forces stationed at observation posts have not largely engaged in fighting prior to this week’s exchange of fire but have now reorganized in Saraqib to slow the regime offensive. Stein said the move was unlikely to change dynamics on the ground.

“I think we’ll end up in a situation where Turkey retains its observation post. It will just be surrounded by Russian military police in a regime-held area,” Stein told Al-Monitor.

The ongoing fighting has displaced an estimated 520,000 people in Idlib since Dec. 1, according to David Swanson, spokesman for the United Nations' humanitarian coordination office. Cold winter weather has complicated humanitarian relief efforts to accommodate displaced people — 80% of which are women and children — along Turkey’s border.

Turkey currently hosts about 3.7 million Syrians and lawmakers have sought to prevent the influx of more while calling for support from the international community in providing shelter, food and services for displaced people within Syria.

“If Turkey's warnings are not taken into consideration, we warn everyone that a refugee exodus will affect Europe to a large extent,” Omer Celik, a spokesperson for Erdogan’s Justice and Development Party, said Tuesday.

Kemal Kilicdaroglu, chair of the opposition Republican People’s Party, expressed similar concerns Wednesday while putting forth a five-point plan to de-escalate violence in Idlib and address the worsening humanitarian situation on the border.

Yusuf Erim, a political analyst for Turkey’s TRT public broadcaster, said averting a new migration crisis was Turkey’s “top priority” in Idlib. Doing so would require close collaboration between Ankara and Moscow amid heightened tensions stemming from developments in Syria.

“It’s important to differentiate between Turkey's bilateral relationship with Russia, which is very strong, and both countries’ cooperation in Syria, which is going through a tough period,” Erim told Al-Monitor.

He added, “I think Turkey's decisive stance on Idlib will push Putin to compromise more than he had originally planned. … Regardless of how Syria plays out, the Turkey-Russia relationship has become too big to fail for both sides and will weather Syria's storm.”

by Murielle KASPRZAK and Joseph SCHMID | AFP | May 26, 2022
END_OF_DOCUMENT_TOKEN_TO_BE_REPLACED