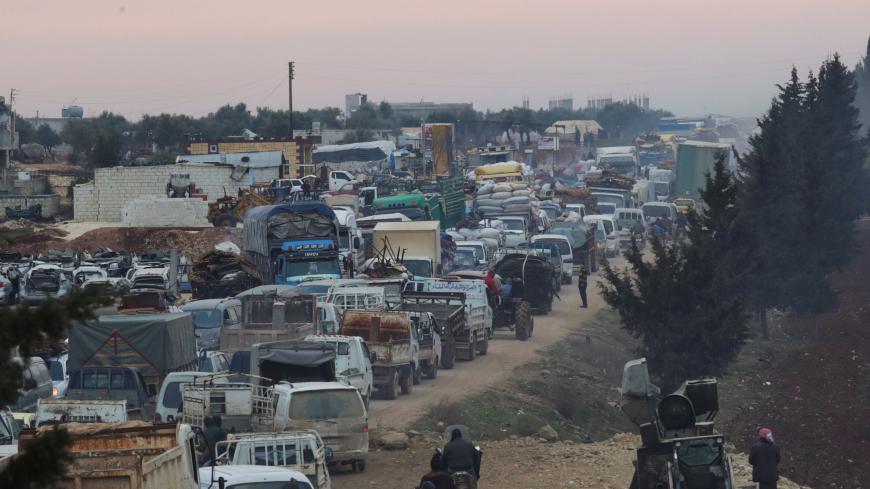 A general view of trucks carrying belongings of displaced Syrians, is pictured in the town of Sarmada in Idlib province, Syria, Jan. 28, 2020. - REUTERS/Khalil Ashawi

ISTANBUL — An estimated 120,000 people have been displaced across Syria’s Idlib province in the last two weeks as Russian-backed forces loyal to Syrian President Bashar al-Assad retook a key city Tuesday.

The displaced population joins hundreds of thousands of civilians who have fled fighting in northwest Syria despite a Jan. 12 cease-fire agreement brokered by officials in Ankara and Moscow who back opposing sides in a nine-year-old conflict that has claimed an estimated 400,000 lives.

“Unfortunately, Russia hasn't abided by either the Astana or the Sochi agreements,” Erdogan said. “We have waited until now, but from this point, we are going to take our own actions. This is not a threat but our expectation is that Russia will give the regime the necessary warning.”

The comments come as Syrian regime forces continue a two-pronged offensive against the last remaining rebel-held areas, with one force moving westward through Aleppo and the other reclaiming areas along the M5 highway in order to reduce travel time between Damascus and Aleppo.

On Tuesday, regime forces backed by Russian and Syrian bombing took control of Maarat al-Numan, the second largest city in Idlib province, which is not only strategically important for opening supply lines to Aleppo but also symbolic, as it was the site of major protests during the initial 2011 uprising against Assad.

The Washington Post reports the current offensive will impact about 500,000 civilians in western Aleppo in addition to another 300,000 in Idlib.

“Russia tells us they fight against terrorism. Who are terrorists? The people fighting to defend their own lands?” Erdogan asked during his speech Wednesday.

Moscow maintains the cease-fire violations are in response to infringements by al-Qaeda-linked terror groups in Idlib, according to a readout of a Jan. 27 phone conversation between Turkish Foreign Minister Mevlut Cavusoglu and his Russian counterpart Sergey Lavrov. Russian officials also claim Ankara has not followed through on promises to separate militants from civilians in Idlib.

In a press statement, the Turkish Ministry of Defense condemned the escalation in Idlib and said it would respond “in the strongest manner without any hesitation” if regime forces threaten Turkish observation posts in Idlib established through a Russian-Turkish agreement in 2018.

US Secretary of State Mike Pompeo joined in condemning the ongoing offensive Tuesday, calling it “unjustifiable.”

“We call for an immediate cease-fire and full access to the affected areas by humanitarian organizations to alleviate the suffering of the hundreds of thousands that have fled the incessant bombing,” Pompeo said in a statement.

Omar Kadkoy, a political analyst focusing on refugee policies at the Ankara-based think tank TEPAV, said recent developments were in line with Assad’s prior statements that the fighting would not end until his forces retook all Syrian territories.

“The Syrian government doesn’t believe diplomacy can achieve the goals they are pursuing, and one result of that is the number of people marching towards the Turkish border for safety,” Kadkoy told Al-Monitor.

Since Dec. 1, 2019, an estimated 389,000 people have been displaced in Idlib, about 80% of which are women and children, according to the UN Office of the High Commissioner for Human Rights. The issue is compounded by cold winter weather and lack of vital services such as hospitals and transportation for the sick, elderly and disabled.

Rising fuel prices have also complicated humanitarian relief efforts as a recent decline in the value of the Syrian pound has posed an additional challenge in heating shelters for internally displaced persons. The price of one liter of imported diesel rose 21.5% over the past month, from 650 pounds to 790 pounds ($1.26 to $1.53), reported the UN Office for the Coordination of Humanitarian Affairs.

Turkey currently hosts about 3.7 million Syrian refugees within its borders. Due to rising political pressure, the Turkish border has been closed to new inflows of refugees in recent months as Turkish humanitarian organizations work to establish refugee camps and provide aid people arriving at the border.

Erdogan has sought to establish humanitarian corridors within Syria along the Turkish border, most recently in areas that came under Turkish control through the October Operation Peace Spring. For the time being, the majority of Turkish humanitarian relief is being directed at displaced populations in Idlib, but Kadkoy noted an alternative strategy may be necessary if the regime offensive continues.

Kadkoy said the large number of people arriving at the Turkish border might prompt Ankara to transfer civilians to Afrin and Azaz, which came under Turkish control following the Olive Branch and Euphrates Shields operations, respectively.

An employee of a nongovernmental organization providing aid along the Turkish-Syrian border said the number of displaced civilians will likely grow as regime forces move from Maaret al-Numan to the town of Saraqeb, which is widely predicted to be the next target for an offensive.

The employee, who asked not to be named due to security concerns, said humanitarian organizations were struggling to provide shelter and food to displaced families.

“A lot of unofficial camps are being established,” the aid worker told Al-Monitor. “People, when they reach a site where they can put a tent, they stay there.”

He added tensions will likely rise along the border, saying he expected protests like those that took place at border crossing gates in August if conditions don’t change.

“If the regime takes control of Idlib, people will cross into Turkey — not to stay in Turkey, but they will have the plan to cross over to Europe,” the aid worker told Al-Monitor. “So in a few months, summer will come and I believe more boats will be crossing from Turkey to Greece.”