With Turkey preoccupied with Libya, Idlib slips through Ankara’s fingers

While Turkey prepares to send troops to Libya, Russia's uncompromising attitude on Idlib signals that Ankara will not get what it wants in Syria. 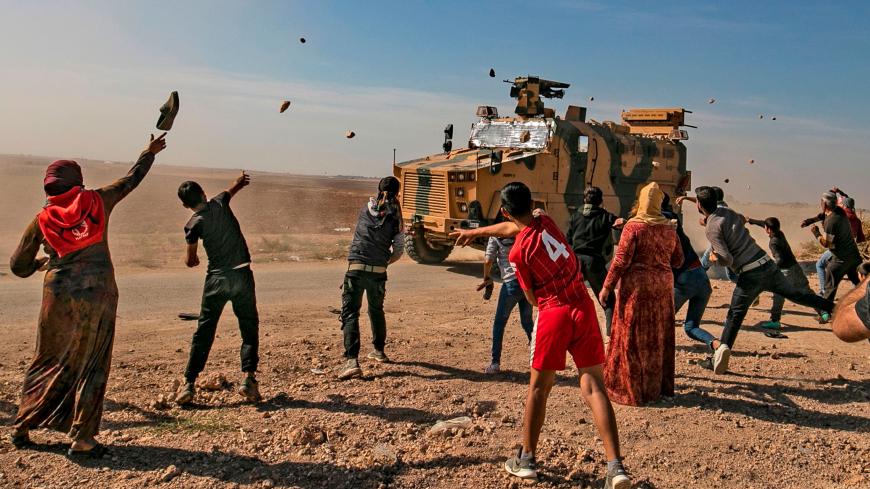 Syrians throw stones toward Turkish military vehicles during a patrol along the Syria-Turkey border near the town of Darbasiyah, Syria, Nov. 11, 2019. - DELIL SOULEIMAN/AFP via Getty Images

On Dec. 19, Syrian regime forces began a new offensive targeting Idlib province, the last rebel stronghold in the country, moving north toward Maaret al-Numan. Within four days, the forces drove the extremist group Hayat Tahrir al-Sham (HTS) and the Turkey-backed opposition National Liberation Front out of 40 settlements. The new power balance is threatening the 12 army observation posts Turkey had set up around Idlib.

The operation proved a major defeat for Syrian opposition forces. But Turkey’s plan to send troops to Libya on a separate mission has already diverted the public's attention to the eastern Mediterranean, enabling Turkish President Recep Tayyip Erdogan to cover up the failures in Syria.

Ankara reacted to the Idlib offensive with unusual restraint, opting to negotiate with Moscow, which backs the Syrian regime. Turkey seems to be avoiding another escalation with Russia over Idlib, especially as the Libya dossier has already created a rift.

The operation against Maaret al-Numan resembles the Syrian army’s successful capture of Khan Sheikhoun in August, a move that redrew Idlib's military borders. During the fall of Khan Sheikhoun, Turkey's Morek observation post had come under siege, though Turkey chose not to evacuate Morek, where Russian military police took control to assure Turkish forces' safety.

The loss of Khan Sheikhoun and Turkey’s failure to support the Syrian opposition disappointed the Free Syrian Army factions. Some of them accused Turkey of diluting the front lines around Idlib by shifting its focus to Manbij and areas east of the Euphrates River against the Syrian Kurdish forces there. Some observers speculated Turkey might have allowed Russian-backed Syrian army forces to advance toward Idlib in exchange for Turkey being allowed to return to its operation against the Kurds.

Now, the Syrian army has begun its third major offensive against Idlib. In addition to Morek, Turkey’s Surman observation post has also come under siege.

Reports from the ground show that the opposition's job is getting tougher each day. Usually, the HTS and Turkish-backed forces would put aside their disagreements and coordinate against regime offensives, but they didn't agree to do so until Dec. 31, the BBC reported.

The regime's apparent first objective is to take control of Maaret al-Numan from HTS and destroy the most significant barrier to the strategic M-5 highway connecting Aleppo and Damascus.

The regime's second objective is to take over Saraqib at the intersection of the M-5 and another strategic highway, the M-4 connecting Aleppo and Latakia. The latter is currently under HTS control. If the regime succeeds in capturing Maaret al-Numan and Saraqib, only 10 small settlements will remain under HTS control and can be captured in a separate operation.

The next strategic objective is to clear the roads leading to the M-4 highway, requiring the regime to capture Idlib's Jisr al-Shughur and Ariha. The regime is expected to launch two simultaneous operations from Aleppo and Latakia to repel HTS from around the M-4. These operations are expected to be more difficult than the previous ones due to Latakia's mountainous terrain.

Turkey has few reasons left to condemn such operations except to express its concerns about a new refugee wave and civilian casualties. Turkey has failed to keep promises it made to Russia last year to clear extremist groups from the highways and set up a demilitarized zone around Idlib. Whenever Turkey voices concern over the Syrian regime’s offensives around Idlib, Moscow quickly reminds Ankara of those unkept promises. Besides, Turkey’s relations with its Western partners are souring, so Ankara doesn’t want to risk its relations with Moscow.

Still, Erdogan said Turkey is making every effort to end the attacks on Idlib. A Turkish delegation visited Moscow on Dec. 23 to discuss the recent developments in Libya and Syria, though the Russian Foreign Ministry’s statement regarding the visit didn't mention Idlib.

Erdogan spokesman Ibrahim Kalin called for a new cease-fire. “We sent a strong message to the Russian side but unfortunately no step has been taken. They said they are working to stop the fighting within 24 hours,” Kalin told the Turkish press immediately after the talks.

Russian Foreign Minister Sergey Lavrov, the recipient of the “strong message,” was meeting that day in Moscow with his Syrian counterpart, Walid Moallem. Russia will continue work to “restore the unity and territorial integrity" of Syria, Lavrov said. Lavrov had also spoken that day by phone with his Turkish counterpart, Mevlut Cavusoglu.

In addition to the intense diplomatic traffic in Moscow, a Russian delegation based at Hmeymim air base near Latakia conducted negotiations Dec. 24 to persuade the opposition to turn over Maaret al-Numan to regime forces. HTS rejected the compromise.

Apparently, Russia and the Syrian government’s game plan is to target strategic points in and around Idlib instead of an all-out operation to capture the whole region. A possible cease-fire at Maaret al-Numan would only help to de-escalate the tension somewhat.

Ankara, on the other hand, is trying to shelve the problem until the Syrian Constitutional Committee completes its work in Geneva to build a framework agreement that will pave the way for a political solution.

Russia, for its part, is trying to unbalance the equation in favor of the Syrian regime by gaining control over the M-4 and M-5 highways to reduce Idlib's importance and weaken the opposition’s hand in negotiations.

Russia is less forthcoming when it comes to Idlib, unlike its compromise on Turkey’s concerns over armed Syrian Kurdish groups, which Ankara considers terrorists and a threat to its national security. Moreover, Russian cooperation in Syria with international actors, particularly China, is increasing in line with developments on the ground.

Indeed, Russia and China blocked the resolution proposing to extend humanitarian assistance to Syria at the UN Security Council in a move that may have cut the supply chain that feeds Idlib. All these signs suggest that 2020 will be a year of critical developments that will disappoint Erdogan.