Turkey works to secure its future relevance in Syria

Turkey’s efforts to make progress in Operation Olive Branch while working on new Syrian de-escalation monitoring outposts east of Idlib may increase military risks, but they keep Turkey in the game. 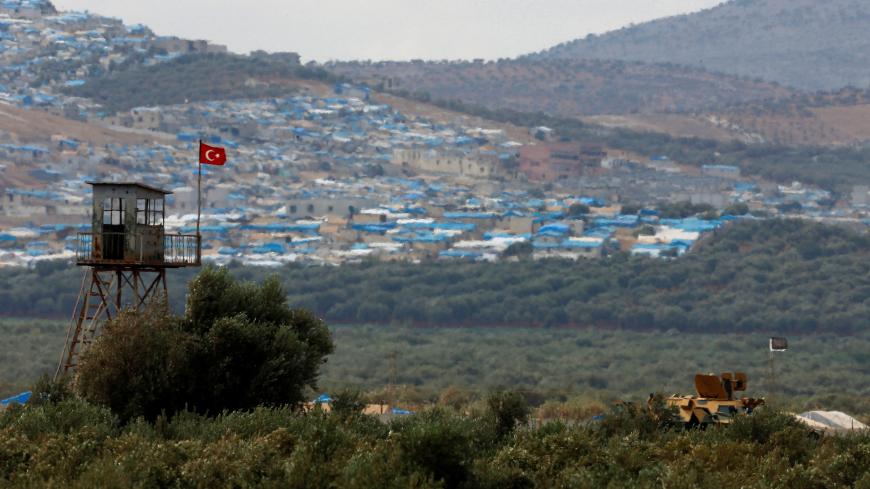 While the Turkish news media is breathlessly reporting every minor detail of the military's offensive in Syria — describing movements village by village, hilltop by hilltop — Turkey is quietly taking major steps to erect another military observation outpost east of Idlib. The effort is part of the de-escalation negotiated last year in Astana, Kazakhstan, in which Turkey, Russia and Iran decided to impose and supervise a cease-fire to enable delivery of humanitarian assistance and allow displaced people to return to their homes.

Also according to the agreement, Turkey is to establish 12 observation posts, creating a mini buffer zone to contain areas in Afrin held by the Kurdish People's Protection Units (YPG). The goals are to separate Aleppo from nearby Idlib province, which is controlled mainly by the Islamist group Hayat Tahrir al-Sham (HTS), and to halt any YPG aspirations to move westward in Idlib province and create a corridor to the Mediterranean Sea.

So far, Turkey has established six of the 12 outposts it has promised, but Moscow wants to speed up the work. Each outpost is designed to accommodate one mechanized infantry company. Almost two Turkish mechanized brigades (nearly 1,400 troops) reinforced with tanks, engineering and construction units are already there, and more are expected.

The six outposts ready so far are in Salwa (north of Idlib), Tal-Tukan (the southern suburb of Idlib city), al-Ais (south of Aleppo), Qal'at Sama'an and Sheikh Aqeel (west of Aleppo), and al-Surman, near the strategic city of Maarat al-Numan.

The Tal-Tukan site is just 4 miles west of the area controlled by Syrian President Bashar al-Assad.

The Turkish Armed Forces (TSK) sent a column of more than 70 armored vehicles to Taftanaz after a similar column went to al-Ais and began settling in at the old air base in the area. The al-Ais column took artillery and rocket fire from Iranian militias (and perhaps the Syrian army) and then encountered a bomb-laden vehicle. One Turkish soldier and a civilian worker were killed; six soldiers and two civilians were wounded.

The column sent to Taftanaz was not challenged. Reports say Turkish helicopters will be based in the former air base at Taftanaz, and communications with observation outposts in Idlib will be provided from there.

Obviously, this means Russia will at least keep the Idlib airspace open to Turkish military helicopters.

The latest TSK column moved to Maarat al-Numan via the Cilvegozu border crossing. That column, which had to move 68 miles, consisted of armored personnel carriers, anti-mine protected vehicles, tactical wheeled armored vehicles, heavy construction machinery, power generators, modular construction elements and scores of trucks loaded with military equipment and supplies. The TSK is now expected to set up its seventh observation post, south of Idlib at Han Seyhun. It appears the TSK is creating a buffer between the Assad and Sunni opposition forces, initially in northern and eastern Idlib, and eventually to the south and southwest.

Control of Idlib would enable at least some of the Syrian refugees in Turkey to settle in this buffer zone and impede a new migration wave to Turkey under pressure from the Assad regime, supported by Russia.

Janet Basurto, the director of Iceserve 24, an information firm closely monitoring cease-fire efforts around Idlib, told Al-Monitor that to call Idlib a de-escalation zone would be a euphemism. Currently, the province is the center of the war, which is endangering more than 1 million internally displaced people and another 1 million Idlib residents living there. The fighting has already prompted a wave of migration, but the most defining fact of the Idlib situation is that civilians are the victims of indiscriminate fire by the Syrian government, Russian forces and militant groups.

Idlib is the largest territory controlled by Sunni opposition groups, which settled there with their families. How the war in Syria will conclude and with what kind of a political settlement will decide the fate of Idlib, the last bastion of the Sunni opposition.

Why does Moscow insist on Turkey completing the outposts quickly?

Russia expert Kerim Has of Moscow State University told Al-Monitor that Russia’s objective is to separate the Sunni opposition groups around Idlib from radical outfits and bring them to the negotiating table, while also herding all the “terror groups” that reject the cease-fire into one “pocket” and eventually neutralize them.

He also thinks that Russia’s permission for Turkey to operate at Idlib has to do with the continuing so-called Operation Olive Branch that began in Afrin. He believes that the operation could turn toward Manbij without entering the heart of Afrin city. Under those circumstances, he predicts, Moscow could well agree to such an operation at Manbij once Turkey erodes the military prowess of opposition forces on the ground.

Today, there are two different jihadi fronts active west of the Euphrates. The first is made up of radicals neither Turkey nor Russia wants to have around; this group is determined to resist around Idlib. The other is the moderate front Turkey controls that operates against the Kurdish YPG. Russia wants the Turkish army to ramp up the pressure on radicals and compel them to join the ranks of the Free Syrian Army (FSA) on the Afrin front. Turkey has worked with the FSA and considers it a moderate opposition group.

So in other words, while Russian and regime forces are pounding Idlib, Moscow also hopes to guide Sunni armed resistance to a moderate stance through Turkey’s de-escalation operations and bring them into the pool of moderates in Afrin. Bluntly speaking, Russia believes the Assad regime will control Idlib long before Turkey achieves its goals. Turkey will not be able to bargain to turn over Afrin in return for Idlib.

Basurto of Iceserve24, which provides businesses with strategic information and analyses, agrees with Has' assessment.

“Seemingly, Russia approves of Turkey’s presence in northern Idlib, not due to its effectiveness to initiate or monitor a cease-fire, but to separate the Afrin region from Idlib until the government forces are done with all the militant groups, and [then to] focus all its attention in the YPG and SDF areas.” The SDF is the Syrian Democratic Forces, a Kurd-Arab alliance supported by the United States but considered an affiliate of a terrorist group by Turkey.

Basurto also addressed Russian domestic politics and the March 18 presidential election there, saying, “To simplify the situation, Russia aims to secure [the Assad regime's] gains across Syria, ensure [Moscow's] interests in the country and at the same time protect [Putin's] image amid a presidential election campaign in Russia. Securing Idlib will signal another victorious win for Assad following eastern Aleppo's liberation in late 2016 and Deir ez-Zor in late 2017. An Idlib free of radical militants will trigger discussions that the Syrian war is nearing its end, leaving only the Kurdish question and Turkey’s presence in Syria to be addressed."

Whether those situations are resolved diplomatically or militarily remains to be seen, she added.