Three years after the opposition took control of Aleppo’s eastern neighborhoods, the Syrian regime’s army, with the help of foreign militias, entered the city and began evacuating civilians to the city’s countryside. 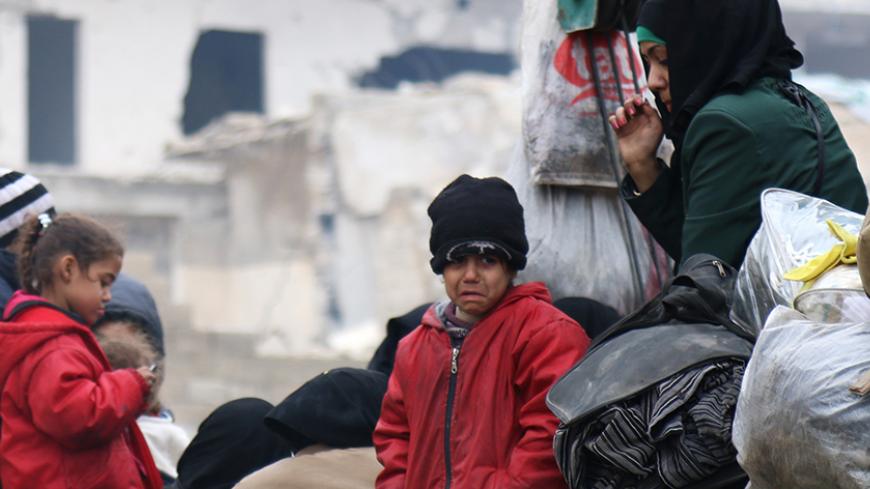 A child waits with others to be evacuated from a rebel-held area of eastern Aleppo, Syria, Dec. 16, 2016. - REUTERS/Abdalrhman Ismail

ISTANBUL — On Dec. 9, Russia announced its control of most of the opposition-held areas of eastern Aleppo, after having raided the eastern neighborhoods in the wake of the fierce military campaign launched Nov. 15. The eastern neighborhoods, which accommodate around 250,000 civilians, had been in the grip of the Free Syrian Army (FSA) since 2012.

Russia used different types of weapons in its campaign supporting President Bashar al-Assad, which it had brought to the Mediterranean shores intermittently during 2016 to pave the way for taking over Aleppo. The campaign reached its peak Dec. 5, when the Syrian army and foreign militias took control of Aleppo’s old fortress, and the neighborhoods started to slip from the grip of the opposition. The Syrian regime and its allies ultimately controlled the entire city and reached an agreement to move the citizens from eastern Aleppo to its countryside.

Some civilians headed out of eastern Aleppo toward the government-controlled west with the regime’s escalation and entry into the east of the city. But after United Nations reports were issued about the disappearance of hundreds of civilians who migrated to the regime’s areas, the displacement wave stopped and civilians preferred to stay put despite the shelling.

Meanwhile, there were many calls from residents and activists to the world to save Aleppo and its people, and to open safe pathways toward the city’s countryside that the opposition controls.

With the entry of the regime forces and supporting militias to Aleppo’s neighborhoods, activists in the city wrote about massacres taking place. Activist Lina Shamy tweeted on the evening of Dec. 12 that massacres against civilians were ravaging Aleppo and that inhabited areas were being shelled. She called on other activists to back Aleppo in its toughest of days. On Dec. 13, UN Secretary-General Ban Ki-moon expressed his concerns about the massacres and fear of their persistence.

Syrian activist Ola Karman, who is besieged in eastern Aleppo, told Al-Monitor via Skype, “The besieged inhabitants are afraid of the breach of the truce once again. They are worried the Iranian militias would break into the city and commit massacres against women and children. The truce was breached before and the evacuation operations were halted repeatedly. Most civilians are concentrated in the neighborhoods of Mashhad and Salah ed-Din in shelters without water or heating. Several are wounded and lie in the only field hospital in the city — amid the shortage of medical staff as most of its members were killed or wounded. But fortunately, the shelling on the city has stopped.”

Raed al-Ahmad, a resident of Aleppo who is waiting to leave the city, told Al-Monitor via Skype, “The situation is currently calm in Aleppo, but we cannot stay in the city after the regime and foreign militias take over. They will retaliate against us and kill us. We know we are headed to a relatively unsafe area in the Aleppo and Idlib countrysides, but at least we can live in the hope of returning to our city one day.”

The Leadership Council in Aleppo, an opposition committee that oversees the city’s affairs, launched a four-point initiative Dec. 7 that includes a cease-fire for five days, followed by the evacuation of the critically wounded and civilians who want to leave through safe pathways. The council would then be able to negotiate with the concerned parties on the future of Aleppo. Russia, which was supposedly sponsoring the negotiations between all parties fighting in Aleppo, refused the initiative.

On Dec. 13, Moscow agreed to the evacuation of the citizens of eastern Aleppo to the Idlib countryside. But Iran disapproved and tried to impede the evacuation and obstruct buses that were going to transport the besieged on Dec. 16. Iran also demanded the evacuation of citizens in Kefraya and al-Fu’ah, Zabadani and Madaya, Shiite villages that are under opposition siege. Consequently, the evacuation was no longer restricted to Aleppo and involved several other cities.

When the Syrian regime sent buses to evacuate Kefraya and al-Fu’ah Dec. 18, a group of angry civilians set the buses on fire to protest the operation. But the agreement remained intact and several other buses were sent on the same day, and the evacuation from eastern Aleppo to Idlib countryside continued.

Several groups left eastern Aleppo toward the countryside through the Aleppo-Damascus road. Journalist Ahmed Brimo who has been following up on the evacuation since day one (Dec. 15), told Al-Monitor, “Around 7,000 people have been evacuated from Aleppo since Dec. 15, most of whom were civilians and around 400 were in critical condition. Several militants — mostly from Jabhat Fatah al-Sham [formerly known as Jabhat al-Nusra] — were among the vacated on the second day, and they joined their factions in Aleppo and Idlib countryside. Several humanitarian organizations were ready to care for civilians after their evacuation from Aleppo countryside — such as Saeed Charity, Violet Organization and USSOM [Syria Relief]. The agreement was suspended and resumed several times due to the obstacles to its implementation on the ground and because it involves several regions.”

On Nov. 30, a group of opposition military factions from Aleppo and a Russian delegation had met in Ankara in an attempt by the Turkish government to broker a settlement deal with both parties — but in vain. A source from the Syrian opposition told Al-Monitor on condition of anonymity, “The meeting focused on Aleppo, but mentioned other areas like al-Waer in Homs. The Russians were stubborn and seemed reluctant to reaching agreement with the negotiating opposition delegation. They reiterated their capacity to impose military control on eastern Aleppo.”

The Syrian air force targeted vital centers and hospitals in eastern Aleppo. The Aleppo Health Directorate, an organization that the opposition established to oversee the health facilities in the areas under its control, issued a report Nov. 19 stating that the city’s hospitals have gone out of service due to the air raids.

During the military campaign in Aleppo, Director of the Syrian Network for Human Rights Fadel Abdel Ghany told Al-Monitor in a phone interview from Doha, “Aleppo is the victim of several crimes and deliberate random shelling that spares no one and nothing, including schools and hospitals. This is a war crime, and the shelling is claiming the lives of civilians and banning the entry of relief material and medical equipment. The UN convoys await a Russian-Syrian permit to proceed. The Syrian regime’s ground forces are participating in the blockade, and the Iranian, Iraqi and Lebanese Shiite militias are backing them. The regime and Russia are committing these crimes. The worst part is that the crimes are not being halted and civilians’ safety is not being prioritized. The silence facing these crimes is horrible. The shelling of hospitals and schools are no longer condemned. It has become normal.”

With the Syrian regime’s complete control of Aleppo, it has achieved a huge victory by expelling the Syrian opposition from the largest Syrian city in terms of population and trade. This is a new card in the hands of the regime before the international community, because it has reduced the area of the opposition's control. The latter only dominates some countrysides of other Syrian cities, in addition to Idlib where several factions of different affiliations (FSA, Islamic factions and Jabhat Fatah al-Sham) are positioned.