The residents of Madaya in the western countryside of Damascus are suffering from lack of food and medical supplies as a result of the siege imposed by the Syrian regime. 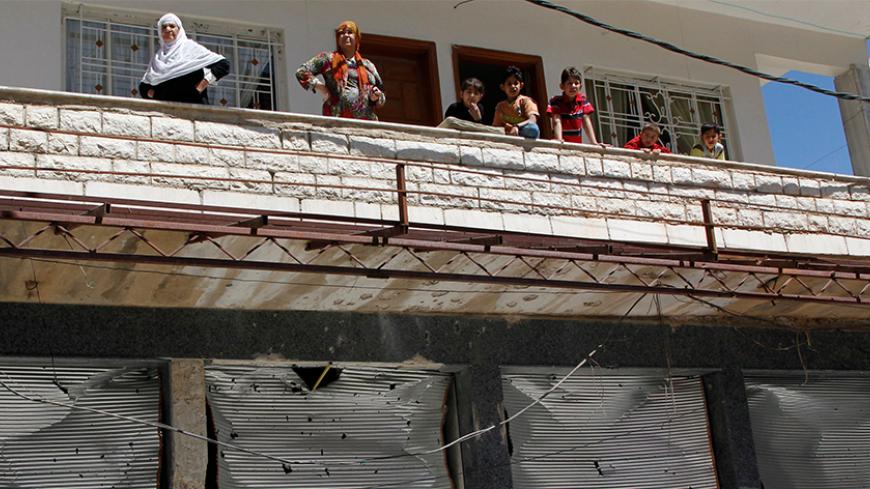 People look out from a balcony above shops with damaged shutter fronts in the Madaya area, near Damascus, May 6, 2012. - REUTERS/Khaled al-Hariri
Mustafa al-Haj
December 31, 2015

DAMASCUS, Syria — The residents of Madaya are dying — victims of starvation, land mines, opportunists and a broken truce. Those who are still alive exist in what resembles a prison.

In July, the Syrian regime sieged the town in the western countryside of Damascus to pressure opposition fighters in nearby Zabadani. In the months since, the situation has grown dire.

“To die quickly and suddenly by the shelling of the Syrian army is more merciful than the slow death that we terribly face every day,” Manal al-Abdullah, a civil rights activist from Madaya, told Al-Monitor via Skype.

“We are dying in this big prison called Madaya. We reached a dead end following the failure of the truce agreement. They did not allow us to leave or bring in food. There is no solution in sight to the hunger crisis we are living. We ask the regime and the opposition to settle their political disputes away from civilians. We can no longer endure this situation.”

Abdullah said most Madaya households live on one "meal" a day. They were anxiously awaiting flour and aid that were supposed to be delivered Dec. 29 by Red Crescent teams that entered the town Dec. 28 to evacuate the wounded. Under UN auspices, about 135 wounded militants and their families were evacuated from Zabadani, and 336 wounded militants and their families were taken to Lebanon. Still, the aid didn't come.

As of this writing, Abdullah was still feeding her children edible grasses and salted water.​

Mohammed al-Debes, who heads relief campaigns for Madaya’s local council, told Al-Monitor the situation is catastrophic. “We are facing a famine in Madaya. This is a shame on all international, organizational and governmental entities claiming that they advocate human rights,” he said.

The situation is compounded by fraudulent traders who are gouging residents for the food that is left or smuggled in.

“Madaya is currently registering the highest prices in the world due to the siege and the traders’ monopolization of what is left of foodstuff, which they sell at ridiculously high prices … while hundreds of families are now living on one meal every other day or every day at best. They spend the rest of their day eating spices cooked in salted water," Debes added.

Some traders in Madaya had been hiding foodstuffs for a long time. When the siege intensified, they started selling them in markets at high prices. Whoever managed to leave the city despite the land mines came back with some supplies.

According to a price list posted Dec. 17 on a Facebook page dedicated to the town of Madaya and run by some of the town’s activists, the cost of 1 pound of sugar or rice reached roughly $34, 1 pound of flour cost almost $47 and 1 pound of powdered milk was going for as much as $52.

The hunger crisis pushed some residents to make desperate and dangerous attempts to escape from the western side of the town toward Zabadani. That area is laced with land mines planted by the Syrian army and Lebanese Hezbollah. The mines have killed and seriously wounded victims.

There are no hospitals in the town and virtually no health care services.

“We have recorded so far 15 death cases caused by malnutrition, including children and elderly. While trying to leave the town, 30 civilians from among the residents died by the explosion of regime-implanted land mines or were killed by sniper operations,” Faeq Burhan, a medical volunteer in Madaya, told Al-Monitor.

"The fate of many of the residents is unknown, especially the elderly, children and people with chronic diseases, due to the shortage of milk and necessary medicines.”

​The suffering of the 40,000 residents of Madaya continued despite a truce agreement reached in late September 2015 between an Iranian delegation and representatives of the Ahrar al-Sham movement in Turkey. The agreement was to lift the regime's siege on Madaya and Zabadani in exchange for lifting the siege imposed by Jabhat al-Nusra on the villages of al-Fu’ah and Kefraya, in Idlib’s countryside. The cease-fire lasted less than a week.

Activists in Madaya on Dec. 7 launched a Facebook campaign called #Respond, calling for the sieges to be lifted in the area. The campaign includes photos and video footage of children and civilians inside Madaya appealing to the international community. The campaign also called on the town’s residents to stage a protest Dec. 23.

“We were about 1,200 people, and we took to the streets at 10 a.m., though most of us were exhausted and hungry," Momina Abu Mesto, who participated in the protest, told Al-Monitor via Skype. When the marchers got within 100 yards of a Syrian checkpoint, "One of the soldiers prevented us from continuing our protest and threatened to shoot.”

Abu Mesto continued, “Three people from among the protesters, including myself, were allowed to talk with the officer in charge of the checkpoint, who promised us that flour will be brought in the town in the next few days.”