A Lebanese official told Al-Monitor that the swap deal discussed between the Syrian army and Hezbollah and the opposition fighters concerning Zabadani and two Shiite villages in Idlib province has been postponed until the outcome of King Salman’s visit to the United States unfolds. 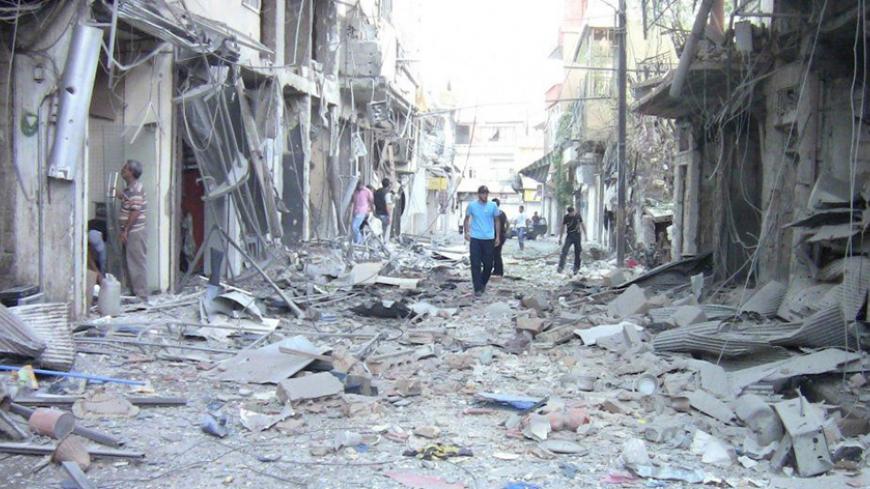 A Lebanese government official close to Hezbollah revealed that Hezbollah fighters and the Lebanese army will soon tighten their control over the entire border with Syria. The official told Al-Monitor on condition of anonymity that the Syrian town of Zabadani will imminently fall in the hands of Hezbollah and the Syrian army.

The official said that Zabadani, which is located east of Damascus and is close to the Syrian-Lebanese border, in the center of the Lebanese Bekaa Valley, fell at the military and field levels, as no more than 400 gunmen from fundamentalist groups — most notably from Jabhat al-Nusra — have been trying to resist the Syrian army and Hezbollah in the town’s neighborhoods since early July. These gunmen have been exhausted by the siege imposed by Hezbollah and the Syrian army. In the town are also roughly 350 wounded militants with no access to medical treatment.

He said that this reality prompted the two conflicting parties — the Syrian authorities and Hezbollah on the one hand and Jabhat al-Nusra on the other — to try to reach a swap deal regarding the wounded and the militants remaining in Zabadani, as well as the Syrian civilians trapped in the villages of al-Fu’ah and Kefraya in Idlib province, in northwest Syria near the border with Turkey.

The idea of ​​the swap deal came about because the residents of these villages are Shiite, just like the Hezbollah fighters. However, the gunmen besieging the villages are Sunnis from among Jabhat al-Nusra’s fundamentalists and other Sunni fundamentalist groups. The wounded in Zabadani are Sunni, too.

The idea of the swap deal seems to have resulted from the urgent situation that involves civilians and those who are wounded and need urgent medical care. However, the swap deal appears to be a population exchange or transfer that is based on the sect of those involved. The official said that the number of civilians who could be included in the swap deal amounts to about 40,000 people from al-Fu’ah and Kefraya.

The official, who was involved in the swap deal negotiations, revealed — without mentioning any names — that several Lebanese, Syrian and Arab parties tried to cooperate to make this deal a success. Jabhat al-Nusra raised its negotiating demands at the start of the military operations in Zabadani on July 3 and declared that it wanted to swap civilians from the two villages in Idlib province with an equal number of detainees held in Syrian prisons. Hence, their first demand in the negotiations was the release of 40,000 prisoners in exchange for the 40,000 civilians.

The official said, "A Syrian official told his negotiators, ‘Would you like me to carry out a series of arbitrary arrests so I can secure this number for them?’ It's a joke. We do not have this number of detainees."

As soon as the negotiation process became more in line with reality, it led to a tentative agreement in early September, according to the official. The agreement stipulates the exit of civilians from al-Fu’ah and Kefraya in exchange for securing the withdrawal of about 400 Jabhat al-Nusra fighters, along with the roughly 350 wounded militants from the town of Zabadani and the release of 500 fundamentalist detainees from Syrian prisons.

However, a few days after the agreement was made, Jabhat al-Nusra officials informed the Lebanese and Arab mediators that they opted out until further notice. The Lebanese government official revealed that he had information that the freezing of the agreement was the result of decisions on the part of some Saudi officials, and that according to data leaked by some Jabhat al-Nusra fighters to brokers negotiating the exchange deal, some in Riyadh asked Jabhat al-Nusra’s leadership not to implement the deal before Sept. 4, the day King Salman bin Abdul-Aziz Al Saud met with US President Barack Obama in Washington. They also asked that the deal be suspended until the results of this visit unfold, in particular in regard to Syria.

The official added that the freezing of the swap deal did not cease the clashes in Zabadani. Hezbollah fighters and the Syrian army, he said, continue to tighten the noose around the rest of the Jabhat al-Nusra militants there. Hezbollah and the Syrian army have subsequently found an opportunity to alleviate the military and field pressure and to tighten the siege on militants.

The same, however, does not apply to the population of al-Fu’ah and Kefraya, whose numbers are much larger than that of the Zabadani militants and whose ability to cope with the siege could go on for months, or even years. The battle in Zabadani consists of a few hundred besieged gunmen, including the injured. On the other hand, the battles in the two Shiite villages are ongoing between fundamentalist groups and the villages’ Shiite residents. The residents have access to sufficient food and supplies inside their villages to resist and continue fighting, unlike the besieged gunmen of Zabadani.

The Lebanese official believes that whatever the answer of Jabhat al-Nusra to the swap deal would be, the Zabadani area will imminently fall in the hands of Hezbollah fighters and the Syrian army. According to him, this will pave the way for two scenarios as far as both sides of this alliance are concerned. Following the fall of Zabadani, the Hezbollah fighters will be able to relocate to the last pockets where Islamic State militants are still hiding in the barren lands of Qalamoun, to the north of Zabadani. Should they fully control the area, they will have tightened their grip on the entire Lebanese border with Syria. As for the Syrian army, the fall of Zabadani will allow it to be fully dedicated to the Ghouta battles, meaning the areas surrounding the Syrian capital on the south and the east.

But what matters for Lebanon, according to the same official, is that the terrorist threat posed by those militants and the risk of their infiltration from Syria to Lebanon will then have almost entirely disappeared.