After negotiations in Turkey failed, Syrian regime forces and Hezbollah have resumed their attacks in Zabadani while opposition factions, mainly Ahrar al-Sham, have resumed military operations in al-Fawaa and Kefraya. 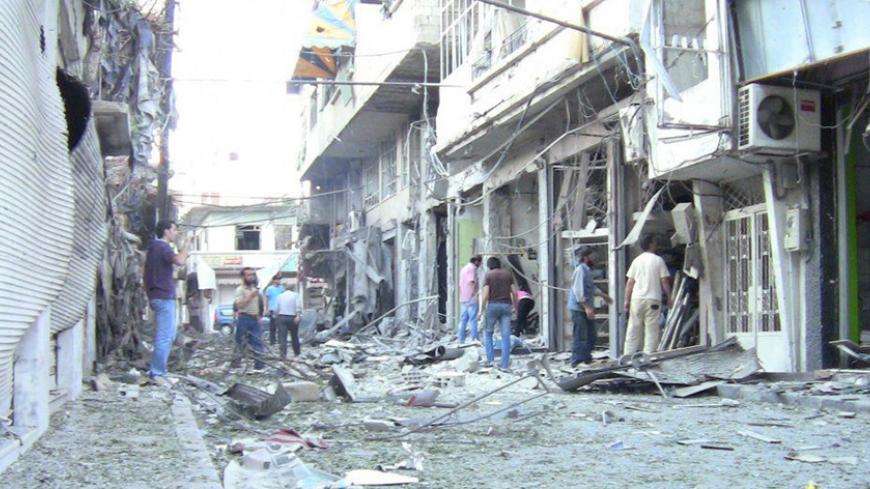 DAMASCUS, Syria — Fighting shattered a fragile three-day truce Aug. 15 as military operations resumed on three fronts: the Syrian regime and its Iranian-backed Lebanese ally Hezbollah against opposition fighters in the mountain city of Zabadani and the opposition's Ahrar al-Sham movement in the two pro-regime, Shiite-majority cities of al-Fawaa and Kefraya in the province of Idlib.

The truce began Aug. 12 to allow negotiations between Ahrar al-Sham and an Iranian delegation in Turkey.

Zabadani is vital for the Syrian regime and Hezbollah, given its location in Damascus’ western countryside and on the international road between Damascus and Beirut controlled by the Syrian regime forces. The town is also close to the Lebanese border and multiple Shiite villages on the Lebanese side, prompting a Hezbollah military operation similar to one it had waged in Qusair in June 2013 in the western countryside of Homs.

Ain Jaber, an activist in Zabadani, told Al-Monitor, “Zabadani has been subject to heavy artillery shelling from al-Atassi and al-Muaskar checkpoints since the morning of Aug. 15, after the end of the truce period and the failure of the negotiations.”

Jaber said, “Since the start of the military campaign waged by the regime on Zabadani in early July 2015 and until today, the city has been targeted by the regime and Hezbollah with more than 1,400 barrel bombs and hundreds of thousands of rockets and artillery shells.”

According to Jaber, the main objective of the negotiations between the Iranian delegation and the Ahrar al-Sham movement, which represents the city of Zabadani, was to reach an agreement to stop Ahrar al-Sham’s military campaign on al-Fawaa and Kefraya in return for halting the regime’s military campaign on Zabadani. The negotiations also aimed to open humanitarian corridors to both regions to bring in food supplies and evacuate the wounded.

On Aug. 17, the Syrian Observatory for Human Rights stated that Kefraya and al-Fawaa have been shelled by “tens of missiles by the opposition factions” since Aug. 15.

“Violent clashes erupted Aug. 17 between the National Defense Forces and the armed Popular Committees — which consist of civilians trained to fight for the regime and Hezbollah — on the one hand, and Jund al-Aqsa, Jabhat al-Nusra (al-Qaeda in the Levant) and Islamic factions on the other in al-Sawaghia area near al-Fawaa, as warplanes bombed areas in the vicinity of the two towns,” the observatory reported.

Abu al-Yazid Taftanaz, the military media official in Ahrar al-Sham, revealed Aug. 15 the Iranian demands for demographic changes that would affect the Syrian social fabric. Iran insisted, he said, “on displacing the civilian population of the city of Zabadani and its outskirts and on the surrender of militants in exchange for the transfer of the people of the towns of al-Fawaa and Kefraya to Damascus.”

He went on, “Iran’s demands were rejected by Ahrar al-Sham, [which is] entrusted by the opposition forces in Zabadani to represent them in the negotiations,” adding, “The failure of the negotiations means the return to military field action, which is now the only option.”

Pro-opposition Syrian Col. (ret.) Nabil Jadid told Al-Monitor, “The negotiations on Zabadani failed because the people of the region, whether armed men or civilians, refused the humiliating conditions of draining Zabadani of its people.”

He added, “Iran and the Syrian regime sought to exploit the current international mobilization regarding Syria to achieve gains, and they want to implement a human replacement process in the region guaranteeing their protection by their ally Hezbollah in Lebanon.”

Jadid stressed the danger inherent in the Syrian regime's effort to change the demographics of the Syrian regions. He explained that Iran wants to protect Hezbollah and stated that there will be no settlement in the region. “We are embarking on more battles, and all opposition factions must step up to defend Zabadani,” Jadid said.

Hours before the truce failed Aug. 15, a so-called draft agreement between the parties to the conflict in Zabadani was leaked. The draft provided for the release of the 40,000 detainees in the Syrian regime's prisons, on the condition that willing civilians and military members concurrently leave al-Fawaa and Kefraya. The leaked draft stipulated that the cease-fire would cover Zabadani, Madaya, Baqin and Serghaya in the western countryside of Damascus, in addition to several regions in northern Syria, including al-Fawaa, Kefraya and Binnish.

Al-Monitor met with Mohammed al-Shamaa, spokesman of the al-Tadamon Party, which played a role in the negotiations held last week after being authorized by opposition fighters in Zabadani. Shamaa said, “On Aug. 18, some groups of opposition fighters in the city of Zabadani surrendered themselves to the Syrian regime in order to regularize their status.”

He pointed out that the current situation in Zabadani is very sensitive, but he refused to give more information about the affiliations of the opposition groups, saying doing so could lead to internal dissent among militant factions in Zabadani, which would result in more casualties.