Syria’s Madaya is under siege and suffering from an influx of people displaced by the regime's attacks on Zabadani. 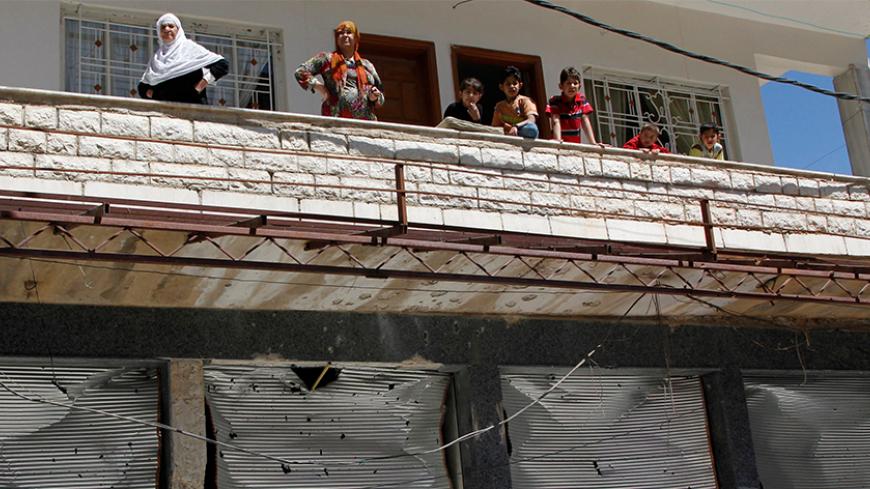 People look out from a balcony above shops with damaged shutters in the Madaya area, near Damascus, May 6, 2012. - REUTERS/Khaled al-Hariri
Mustafa al-Haj
September 15, 2015

DAMASCUS, Syria — The Syrian mountain town of Madaya, which has been under siege by the regime and Lebanon's Hezbollah for 2½ months, is running out of food and supplies, and the humanitarian situation is worsening as the town is targeted with barrel bombs and flooded with civilians displaced from nearby Zabadani.

Madaya is about 25 miles northwest of the capital, Damascus, and borders Zabadani city from the southeast. Madaya's original population of 20,000 has doubled to 40,000 with the forced displacement of residents mostly from Zabadani. Some speculate the Syrian regime is taking revenge on Madaya's residents and the people displaced there because of their support for the revolution.

The regime, however, has said militants from Zabadani also are fleeing to Madaya.

Ibtihal Youssef, a civil activist in Madaya, confirmed that the humanitarian situation is very difficult. She told Al-Monitor, “Relief organizations Eithar and Wafaa distribute aid to civilians who turned school buildings into shelters, but the suffocating siege led to the depletion of the food aid. We even slaughtered the town’s sheep and cows to distribute meat to the people.”

What remained of the reserve of flour bags that were hidden in a warehouse is finished and so bread is no longer available in Madaya. Youssef said people are soaking bulgur and eating it to curb their hunger. "The situation will become even more disastrous for children and the elderly, especially with the depletion of baby formula and essential medicines for the elderly. The regime is preventing civilians from leaving the town, no matter how critical their medical condition.”

Negotiations failed Aug. 5 between a representative of Ahrar al-Sham and an Iranian delegation in Turkey. The negotiations sought a cease-fire in Zabadani and the countryside of Damascus in exchange for a reciprocal truce in the villages of al-Fu’ah and Kefraya, the stronghold of the Shiite community in the countryside of Idlib province in northwest Syria near the border with Turkey. After the talks failed, fighting in Madaya intensified and the town was flooded with organized waves of displaced civilians.

“The [deliberate] displacement decision was announced through loudspeakers from the minarets, and the people of the neighborhoods of Inshaat and al-Mamoura on the eastern outskirts of the city of Zabadani were the first to be displaced to Madaya,” political activist and journalist Ali Ibrahim, who is from Madaya, told Al-Monitor.

According to the latest statistics from the local council in Zabadani, some of those displaced are from the nearby village of Bloudan, while others come from the eastern neighborhoods of Zabadani, which are controlled by the regime.

Ibrahim said, “The people of Zabadani displaced to Bloudan [then] were also forcibly displaced to Madaya. Thugs and security patrols affiliated with the Syrian regime raided homes in early September and immediately displaced to Madaya, using military Zell trucks, every person holding a personal registration card from Zabadani.”

Former military officer and opposition military analyst Nabil Jadid told Al-Monitor his theory of why the Syrian regime — supported by Hezbollah — is forcing the displaced residents of Zabadani only to Madaya.

“Now the political equation is Madaya in exchange for al-Fu’ah and Kefraya. By forcibly displacing the people of Zabadani to Madaya, the regime will have a new pressure card it may use against opposition fighters in Zabadani.” Jadid added, “It became clear that any attack by opposition fighters in the town of Zabadani on the regime’s checkpoints is reciprocated by the regime’s bombing of the city of Madaya, to force them to stop.”

However, Ali Maqsoud, a pro-Syrian regime military affairs researcher, told Fars News Agency on Sept. 4, “Madaya will be the safe haven for militants fleeing from Zabadani. The militants’ escape and stay in Madaya or Serghaya will not affect the cleansing process of these two towns. It is natural that the powers behind the armed militias push toward a new negotiation process.”

Maqsoud added, “There are regional powers supporting terrorism that wish to free this region of the armed presence of the Syrian army. This region is considered a fundamental pillar in the operations aimed to secure the western and southwestern Syrian borders.”

Al-Monitor met with Ammar Yousef, a member of the reconciliation committee in Madaya, who said Hezbollah is now hampering any attempt to reach a solution to save civilians in Madaya, since Hezbollah's only objective is to control the town so it can secure the headquarters of its militia on the Lebanese-Syrian border and lift the siege on the Shiite towns in the Idlib countryside.

Yousef added, “On Sept. 1, a delegation from a reconciliation committee in Madaya, with a 4th Army Division colonel named Adel Issa, headed to Damascus to agree on a cease-fire and open humanitarian crossings to the town. But at one of Hezbollah’s checkpoints officers took up arms against the colonel and ordered the delegation to return to Madaya, which foiled the reconciliation committee’s efforts.”

According to Yousef, the regime completely entrusted Hezbollah on Sept. 13 to handle matters relating to Zabadani and Madaya.

On a related note, the academic year of 2015-16 starts next week. Al-Monitor met with former teacher Zeina Obeid, who said some 3,200 children in Madaya will not be going to school this year if the random shelling continues. “There are six schools in Madaya, two of which were substantially destroyed by the regime’s shelling. Four other schools are inhabited by the displaced flowing in from different regions of the Damascus countryside and Zabadani.”

Obeid wondered how the children of Madaya will go to school if the residents spend most of their time in shelters.

Moreover, on Sept. 12, a group of women displaced from Zabadani to Madaya issued a statement titled "Zabadani Women's Initiative: Stop the Violence." The statement called for cease-fires in Zabadani and Madaya and requested health care for the displaced. The statement also called for preventing discrimination against people from Zabadani wherever they are currently seeking shelter, ensuring their safety, preventing their forced removal from the areas of displacement and guaranteeing the unconditional and complete access of humanitarian aid to Zabadani.