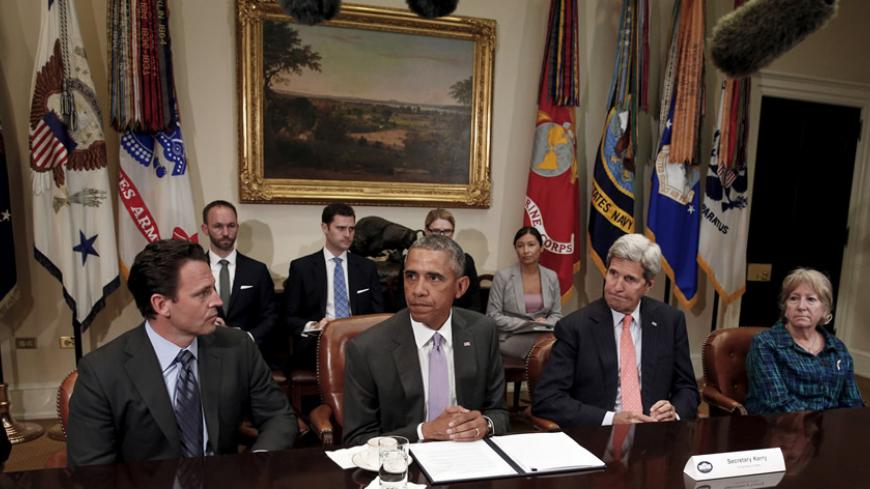 US President Barack Obama, with Secretary of State John Kerry (2nd R) at his side, meets with a group of veterans and Gold Star Mothers to discuss the Iran nuclear deal at the White House in Washington, Sept. 10, 2015. - REUTERS/Kevin Lamarque

Laura Rozen reports that US President Barack Obama made a low-key visit to the Department of State on Sept. 17 to congratulate Secretary of State John Kerry and the Iran negotiating team, including outgoing Undersecretary of State for Political Affairs Wendy Sherman.

A US official told Rozen that Obama joined Kerry in a little “l’chayim” (toast) to Sherman and the team.

Sept. 17 marked the end of the 60-day congressional review of the Joint Comprehensive Plan of Action (JCPOA). Congress failed to pass a resolution of disapproval, so from a US perspective, the JCPOA is a “done deal,” and the focus is now on implementation, which means the burden and spotlight shifts to Iran.

It might be helpful at this stage to assess exactly where this process stands, and what the JCPOA aims to do, especially after some Republican candidates for president claimed during the debate on Sept. 16 that the JCPOA accelerates, or allows Iran to get closer, to a nuclear weapon, which is, frankly, hard to reconcile with the text of the agreement itself.

The next JCPOA benchmark is “adoption day,” Oct.18, when Iran must begin to make changes in its nuclear infrastructure in compliance with the JCPOA, working with the International Atomic Energy Agency. US officials this week summarized what needs to happen before sanctions are lifted, including “taking out thousands of centrifuges and putting them into IAEA-monitored storage [at the Natanz enrichment facility) … taking out a very large amount of infrastructure, specifically some of the pipework and electrical infrastructure that allows for the enrichment process to work; … ship out to another country the vast majority of their enriched uranium stockpile; … take out about two-thirds of its centrifuges and associated infrastructure, and here again we’re talking about the physical dismantling and removal of a large amount of pieces of equipment, pipework, electrical infrastructure, and things like that [at the Fordow facility]; … the center of that [Arak heavy water] reactor, the calandria, is going to be pulled out and filled with concrete so that it can’t be used again; … [putting] in place the increased transparency measures. So in this regard, we’re talking about new technologies that Iran has agreed to implement at its facilities; active electronic seals that will provide for much more real-time monitoring — systems that don’t exist anywhere else in the world that they’ll have to iron out, including online enrichment monitoring, which tells the IAEA in essentially real time the enrichment level of different — of cascades that are operating. In addition, Iran needs to put in place transparency measures at its uranium mills so the IAEA has continuous monitoring about the material that’s coming out of the uranium mills to prevent conversion to a covert nuclear path and continuous monitoring at the centrifuge manufacturing facilities.”

It is bewildering to understand how Iran taking these measures somehow facilitates its path to a bomb, as critics claim.

Only when Iran takes these and other steps, including a report from the IAEA on the past military dimensions of Iran’s nuclear program, does the process shift to the next benchmark, “implementation day,” when certain sanctions are lifted. Implementation day is expected to take place in spring 2016, but could be longer, or even never. It all depends on Iran.

White House: Critics of US Syria policy need to "fess up"

Gen. Lloyd Austin, commander of the US Central Command, testified before the Senate Armed Services Committee on Sept. 16 that only “four or five” US-trained rebels were in the fight against the Islamic State (IS) in Syria, despite a plan that 5,400 fighters would be trained using a budget of over $500 million.

Julian Pecquet reports that some Democrats on the committee are starting to ask whether the United States should rethink its precondition that Syrian President Bashar al-Assad should step aside, especially given the failure to date of the US train-and-equip mission.

Sen. Joe Manchin, D-W.Va., told Al-Monitor that he is concerned about a "void" that could be left if Assad is removed and there is no viable political opposition, and raised the specter of US interventions in Iraq and Libya. "Who are you going to replace him with? What are you going to do? Leave a void?" he told Al-Monitor. "That hasn't worked with Saddam [Hussein] or with [Moammar] Gadhafi. It's a royal, royal mess, and we're just throwing more money at it and making it messier."

The next day, White House spokesman Josh Earnest lauded Austin for the integrity of his testimony, especially compared with critics of the Obama administration’s Syria policy. “We haven’t seen that kind of character on display from our critics who have suggested for years that this [arming Syrian rebel forces] was the recipe for success in Syria.”

Earnest called on critics of Obama’s policies to “fess up,” and characterized arguments that the United States could have turned the tide against Assad if it had done more sooner to militarily back Syrian rebel forces as throwing good money after bad: “It would call into question the vetting standards if somebody could do something in the space of four years that might prevent them from being included in that group. I don't think that there is a particularly strong case to be made that an earlier and more significant investment in a program that has shown not very good results — to put it mildly — is a recipe for success.”

Meanwhile, signs that Russia may be preparing to use its expanded air base in Syria to support Syrian government forces prompted the first conversation this year between US Secretary of Defense Ashton Carter and Russian Defense Minister Sergey Shoygu. Russia has called for enhanced military cooperation to battle IS, but insists that the Syrian government should be part of that effort, which has been a nonstarter for the United States and its coalition partners. Nonetheless, the United States and Russia have intensified their discussions to “de-conflict” their military forces in Syria and facilitate talks toward a political transition.

In Syria, the war continues to take its awful toll.

Mohammed al-Khatieb reports from Aleppo that relentless attacks by IS are “displacing ever more civilians, whose lives have become a living hell in the absence of relief aid inside the country and in light of Turkey’s continued border closure.” Khatieb adds that since August, “Hawar Killis, Tlalin, Kafra, Marea, Umm Hawsh, Herbel and dozens of other towns and villages in the northern Aleppo countryside have been emptied of their populations by IS attacks.”

Mustafa al-Haj reports from Syria, “The mountain town of Madaya, which has been under siege by the regime and Lebanon's Hezbollah for 2½ months, is running out of food and supplies, and the humanitarian situation is worsening as the town is targeted with barrel bombs and flooded with civilians displaced from nearby Zabadani.”

Haj explains that the population of Madaya, approximately 25 miles northwest of Damascus, has doubled to 40,000 as a result of displaced residents from the fighting in Zabadani.

“Some speculate the Syrian regime is taking revenge on Madaya's residents and the people displaced there because of their support for the revolution,” Haj writes. “The regime, however, has said militants from Zabadani also are fleeing to Madaya.”

Haj recounts how Iran had tried and failed to broker a cease-fire in Zabadani last month: “Negotiations failed Aug. 5 between a representative of Ahrar al-Sham and an Iranian delegation in Turkey. The negotiations sought a cease-fire in Zabadani and the countryside of Damascus in exchange for a reciprocal truce in the villages of al-Fu’ah and Kefraya, the stronghold of the Shiite community in the countryside of Idlib province in northwest Syria near the border with Turkey. After the talks failed, fighting in Madaya intensified and the town was flooded with organized waves of displaced civilians.”