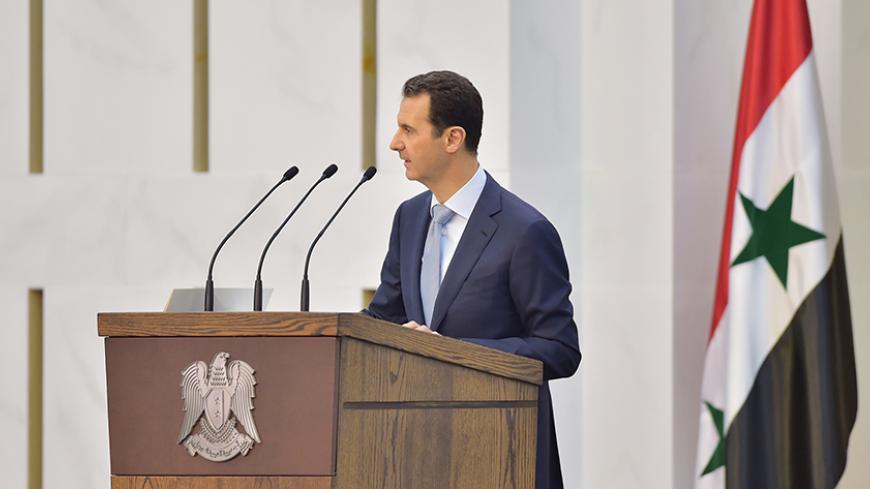 Syrian President Bashar al-Assad speaks during his meeting with the heads and members of public organizations and professional associations in Damascus, July 26, 2015. - REUTERS/SANA/Handout via Reuters

A growing number of Democratic lawmakers are openly questioning whether toppling Syria's Bashar al-Assad should still be a priority amid steady gains by the Islamic State.

The issue came to a head Sept. 16 as a key Senate panel held its first IS hearing since the first batch of 54 US-trained rebels was routed in late July by al-Qaeda-linked Jabhat al-Nusra as soon as it entered Syria. Reports that Russia is beefing up Assad's forces with tanks, troops and artillery has only added to the calls of some Democrats for a new strategy.

"I don't know that it helps for us to keep banging the table about Assad," panel member Claire McCaskill, D-Mo., told Al-Monitor. "I think it would be better for us to be as effective as possible in fighting [IS] and restoring some kind of security environment that shifts back the flow of refugees."

"I think we've come to a point where we should be reassessing what our strategy [should be] with respect to Assad and Syria and the conflict there," she said. "I don't have the answer on me about what I think that should be, but I really think we're at a point where we need to reassess, because what we've been doing is not working."

Sen. Joe Manchin, D-W.Va., said he's worried about the "void" left by Assad's removal in the absence of any viable moderate opposition.

"Who are you going to replace him with? What are you going to do? Leave a void?" he told Al-Monitor. "That hasn't worked with Saddam [Hussein] or with [Moammar] Gadhafi. It's a royal, royal mess, and we're just throwing more money at it and making it messier."

And Sen. Tim Kaine, D-Va., cautioned against open calls for toppling Assad. Instead, he has backed the creation of humanitarian safe zones for civilians brutalized by the regime's barrel bombs as well as Islamist extremists.

"I don't think regime change should be an official policy of the United States," Kaine said. "Our batting record is very poor."

The growing angst follows repeated assurances by the Barack Obama administration that Assad "must go" and that his days were "numbered." Four years and more than 200,000 deaths later, the only groups making much progress on the ground appear to be IS and other extremist militant groups.

During the hearing, McCaskill warned Gen. Lloyd Austin, commander of the US Central Command, that the Pentagon's $600 million request for the train-and-equip program for the fiscal year starting Oct. 1 "seems very unrealistic to me." Austin didn't help his case when he admitted that only "four or five" US-trained rebels — out of 5,400 the Obama administration had hoped to train by year's end with the $500 million appropriated last year — were currently fighting in Syria.

Shaheen agreed with McCaskill that the program is in jeopardy.

"I do think it will be challenging to continue to support that kind of money," Shaheen told Al-Monitor. "There are other initiatives that have potential to have significant impact, such as efforts to counter [IS] propaganda. There's a center in the UAE [United Arab Emirates] that we've been working with to try and do that; perhaps that's a better place to put those resources."

And McCaskill and Manchin recommended using the money to pay fighters with the Kurdish People's Protection Units (YPG) in Syria. The YPG, which Turkey considers a terrorist group, has increasingly been coordinating with Assad's forces in their joint fight against IS.

"What we ought to do is rethink that $500 million that we've committed, how much we've spent already as far as trying to recruit in Syria," Manchin told Al-Monitor. "Knowing that the Kurds will fight, you can get a much better bang for your buck right there. See if you can back the Turks off from trying to kill the Kurds that are fighting in Syria, and make some peace on that end of it and then you have a united front in terms of a good ground force."

Even Senate Armed Services Committee Chairman John McCain, R-Ariz., a longtime proponent of greater US involvement to counter Assad through no-fly zones and other means, warned that the train-and-equip program was doomed absent "major changes."

McCain has lambasted Russia's full-fledged entry into the fight as proof that President Obama has allowed US foes to gain traction in the Middle East. But others see an opportunity.

"I would suspect that the reason for the Russian [moves] is the belief that the Assad regime is at least pulling back, and there's some significant instability," Kaine told Al-Monitor. "I don't think they care at all about Assad. I think what they care about is stability. And if that is the case, and they see [Jabhat] al-Nusra and especially [IS] as the same threat that we do, then there are some possibilities there."

Sen. Angus King, I-Maine, agreed. He maintained the need for getting rid of Assad, but said the Obama administration was clearly going about it the wrong way.

"Part of good strategic thinking is that you modify your strategy according to changed circumstances," King told Austin during the hearing. "You mentioned Assad is losing his capabilities every day — I'm sorry, general, I've been hearing that since 2013: Assad is about to go, he's about to collapse. We've got to find a strategy that allows us to move Assad aside in some way, working with the Russians, if necessary, or the Iranians, because he's the irritant that's keeping this thing stirred up."

The comments follow reports that Russia in 2012 offered a compromise that would have seen Assad step down. Western officials have questioned the Kremlin's ability to ever deliver on a proposal that ended up going nowhere.

King went on to embrace McCain's calls for a humanitarian corridor that would be defended against incursions by Assad's air force. Kaine endorsed the idea in an April 21 letter to Obama along with McCain and Sens. Dick Durbin, D-Ill., and Lindsey Graham, R-S.C.

"You would need military support, but I think you would get it," Kaine told Al-Monitor on Sept. 16. "The European nations, I think they would participate in militarily providing safety — with us, with Turkey — to staunch the flow of refugees. You could still have so many more come out of Syria. I actually think that if you do that, and you do it well, that will actually increase the odds of some political resolution of the situation in the country."