Lawmakers of both parties expressed disbelief that the rebels will stick to the role the United States wants to carve out for them. 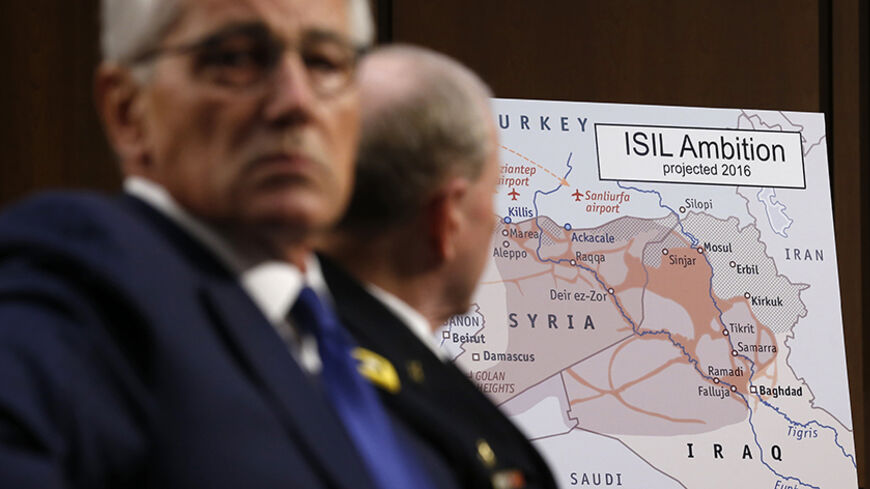 US Secretary of Defense Chuck Hagel (L) and Chairman of the Joint Chiefs of Staff Gen. Martin Dempsey look at a map showing the Islamic State's territorial ambitions as they testify during a Senate Armed Services Committee hearing on Capitol Hill in Washington, Sept. 16, 2014. - REUTERS/Kevin Lamarque

The Obama administration fleshed out its goals for US-trained Syrian rebels on Sept. 16, prompting bipartisan concerns even among some of the opposition fighters' biggest supporters on Capitol Hill.

Defense officials told lawmakers on the Senate Armed Services Committee that they were confident the rebel force would put its three-year war with Bashar al-Assad's forces on the back burner as the Syrian opposition focuses on battling the Islamic State (IS). They insisted that would prevent the US from getting sucked into Syria's civil war while creating an acceptable partner to combat IS inside its home base.

"It seems to me you're going to have to neutralize Bashar al-Assad's air assets if you're going to protect the people you are arming and training and sending in to fight," McCain insisted.

"What you're hearing us express is an [IS]-first strategy," Dempsey replied. "I don't think that we'll find ourselves in that situation given what we intend to do."

"You don't think the Free Syrian Army is going to fight against Bashar [al-] Assad, who has been decimating them?" he said. "You think these people you're training will only go back to fight against [IS]? Do you really believe that, chairman?"

"What I believe, senator, is that if we train them and develop a military chain of command linked to a political structure, we can establish objectives that defer that challenge into the future," Dempsey replied. "We do not have to deal with it."

"That is a fundamental misunderstanding of the entire concept and motivation of the Free Syrian Army," McCain retorted. "It is Bashar [al-] Assad who has killed many more of them than [IS]. And for us to say that we are going to go in and help train and equip these people only to fight against [IS] — you're not going to get many recruits, general, I guarantee you that. It's a fundamental fallacy in everything you are presenting today."

The Obama administration has ruled out cooperating with Assad or his main backer, Iran, as a way to get Sunni countries such as Saudi Arabia on board a united coalition against IS. The White House also wants to avoid a conflict with Assad, however, even though Hagel hinted that the United States may be willing to defend the rebel troops it trains.

"They will defend themselves" if attacked by Assad, Hagel told McCain. "We will help them and we will support them. Any attack on those that we have trained and are supporting us, we will help them."

The House is scheduled to vote on the authorization as an amendment to a short-term spending bill on Sept. 17. It's expected to pass, with the Senate taking up the bill perhaps as early as Sept. 18 before heading out until after the midterm elections.

Dempsey and Defense Secretary Chuck Hagel said the $500 million mission aimed to train and equip slightly more than 5,000 vetted rebels within one year. The program would be hosted and partly paid for by Saudi Arabia and aims to create a fighting force inside Syria, where two-thirds of IS' estimated 31,000 fighters are believed to be.

"The strategy is to squeeze [IS] from multiple directions," Dempsey said. "So if we can get the government of Iraq to reach out to these populations that have been disadvantaged during the [Nouri al-] Maliki regime … if we get enough [Iraqi army forces] to go on the offensive, if we can get the peshmerga to squeeze from north to south, and then find a way over time in Syria … to use the moderate opposition, then I think we've placed [IS] in an untenable position."

"The package of assistance that we initially provide would consist of small arms, vehicles and basic equipment like communications, as well as tactical and strategic training," Hagel said. "As these forces prove their effectiveness on the battlefield, we would be prepared to provide increasingly sophisticated types of assistance to the most trusted commanders and capable forces."

Dempsey also shed some light on the origin of some of the rebels the United States expects to train.

"In many cases they've already been driven out of their homes and out of their villages by [IS], or by the [Assad] regime in some cases," Dempsey said. "We think we'll be recruiting mostly from displaced populations and therefore it won't be as though they're giving up the security of their families to come and train with us."

Dempsey acknowledged the 5,000-fighter force would not be enough to defeat IS.

"If you're asking me, how does the opposition in Syria finally prevail against [IS], I think it's going to require the assistance in particular of the Jordanians and probably some of the Syrian Kurds and probably the Turks," he said.

Rather, Dempsey said, the goal is to help set up a political force out of the military units trained by the United States.

"We believe one of the advantages of undertaking an overt … train-and-equip mission is it's going to force [the Syrian opposition] to find some way to establish a responsible political architecture into which this military force can play," he said. "As part of the program, I can assure you that we will not only be training riflemen but also be training leaders, so that there's a military chain of command to whom these Syrian fighters are responsive."

Looming over the conversation is the dismal record of the US-trained Iraq forces to date in their fight against IS.

"When you start looking at what we've spent — almost $20 billion trying to build up a 280,000-person army in Iraq and the first time they were tested they turned tail and ran," said Sen. Joe Manchin, D-W.Va.

He expressed the same doubts as McCain about the priorities of Syrian opposition forces.

"I have a hard time understanding how we're going to convince these 5,000 to turn around and fight [IS], who's fighting the same religious war that they're fighting against the Assad regime," Manchin said.

Some lawmakers, however, expressed confidence that the mission could be organized in a way to limit confrontations with Assad's forces — at least for a while.

"For a lot of the rebels, their priority is the Assad regime — so that's going to be a challenge," said House Intelligence member Adam Schiff, D-Calif., who remains undecided about how he will vote. "Geography may help: Where we train and place people will determine who their most immediate foe is."

He acknowledged, however, that "where it may get dicey" is if the Assad regime bombs US-trained rebels.

"What will the response be, on our part?" Schiff said. "There are going to be challenges down the road, any way you look at it."

Others said creating a US-friendly alternative to Assad and IS is worth the risks.

"Before we get to those questions, we need to have an alternative force. Once we create that, then we can deal with all those other questions," said Rep. Adam Smith, D-Wash., the top Democrat on the House Armed Services Committee. "If we don't create that, then the choice is between [IS] and Assad — and either is a profound threat to our national security."