Hagel: Taking out Assad won't put IS 'back in the box'

Defense Secretary Chuck Hagel shot down reports that the Obama administration is considering a change of targets in its fight against the Islamic State. 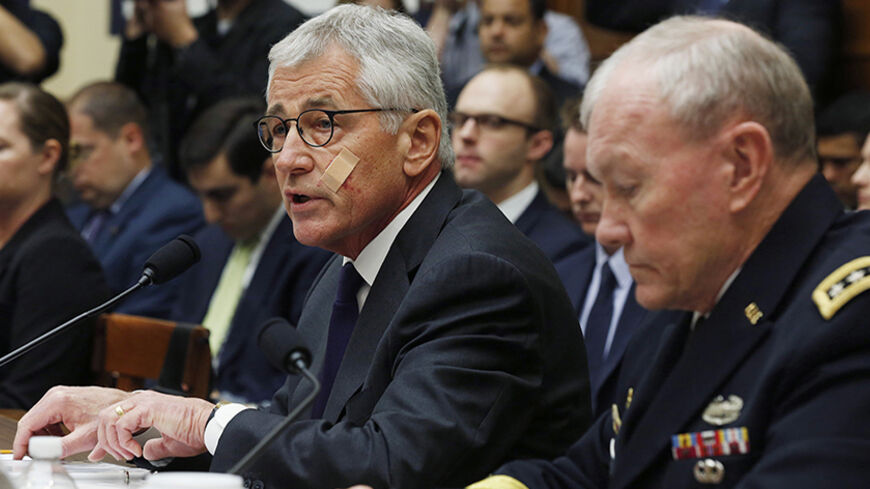 US Secretary of Defense Chuck Hagel speaks next to chairman of the Joint Chiefs of Staff, US Army Gen. Martin Dempsey, during the House Armed Services Committee on Capitol Hill in Washington, Nov. 13, 2014. - REUTERS/Larry Downing

Senior US officials denied Nov. 13 that the Obama administration is considering making the removal of Bashar al-Assad a key plank in its strategy to defeat the Islamic State (IS).

Defense Secretary Chuck Hagel and Joint Chiefs Chairman Martin Dempsey told lawmakers on the House Armed Services Committee that the focus remains on helping Iraqi forces defeat the Sunni militant group inside Iraq. The remarks follow a CNN report Nov. 12 indicating a rethink inside the White House amid complaints from coalition partners such as Turkey and Saudi Arabia that want Assad removed.

"There is no change in strategy," Hagel told Rep. Jackie Speier, D-Calif., who voted against legislation to train and equip Syrian rebels in September.

"Assad's part of the equation, of course," Hagel said. But "just alone dealing with Assad, where we are now … that's not going to put [IS] back in the box."

"We could change Assad today, and that's not going to change all the dynamics," he said. "Who are you going to replace Assad with? What kind of an army can take on [IS]?"

Dempsey said about 15,000 Syrian rebels would be needed to "put enough pressure on [IS] forces in eastern and northern Syria." He said an operational planning conference at Central Command headquarters in Tampa this week with 190 military planners from 30 nations is laying the groundwork for how to deploy them.

"It will be a force large enough to defend initially so that it can actually hold territory," Dempsey said. "And then it should have the capability over time to become offensive."

"Our strategy in Syria will demand time, patience, and perseverance to deliver results. We cannot accomplish our objectives in Syria all at once," he said. "The position of the United States remains: Assad has lost the legitimacy to govern. But there is no purely military solution to the conflict in Syria. Alongside our efforts to isolate and sanction the Assad regime, our strategy is to strengthen the moderate opposition to the point where they can, first, defend and control their local areas; next, go on the offense and take back areas that have been lost to [IS]; and ultimately, as their capabilities and leverage develop, to create conditions for a political settlement in Syria."

Lawmakers indicated that the administration's Syria policy is still evolving.

"There was very limited feedback in that regard," Corker said. "Less than what you saw on CNN."

He said any focus on Syria would require a congressional vote on a new war authorization.

"I do believe there are some elements that are missing in this overall strategy. And if they were to attempt to implement those elements, my sense is they would need an AUMF [Authorization for Use of Military Force]," Corker said. "I don't think Assad is covered by the 2001 AUMF. So that would be sort of Exhibit A."

Such an expansion would be a tough sell, however, particularly for Democrats.

"I continue to believe that the United States should stay out of this Syrian civil war," said Sen. Chris Murphy, D-Conn. "I don't think there's any way to train and equip a force that's going to be able to fight both Assad and [IS] at the same time."