A look at the Middle East issues Congress will be addressing the week of Sept. 15. 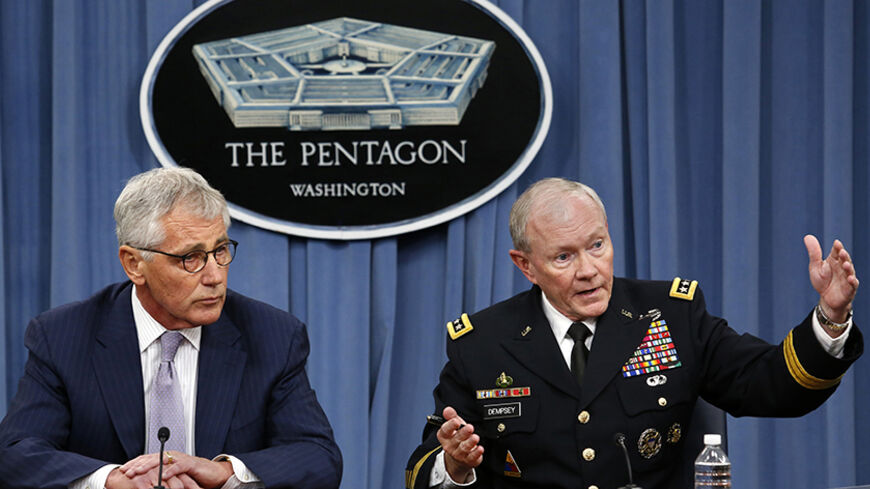 US Secretary of Defense Chuck Hagel (L) and Chairman of the Joint Chiefs of Staff Gen. Martin Dempsey hold a press briefing at the Pentagon in Washington, Aug. 21, 2014. - REUTERS/Yuri Gripas

Congress may finally vote next week to arm Western-backed Syrian rebels, a year and a half after legislation to do just that was first filed.

After Saudi Arabia agreed last weekend to host a training operation for the Free Syrian Army, Obama administration officials turned up the pressure on lawmakers to take action. The White House says it can live without the extra $500 million it had previously requested for the train-and-equip mission for now, but it wants Congress to grant it the authority to start setting up the mission before lawmakers head out for the midterm elections.

Despite broad bipartisan concern over the rise of the Islamic State (IS), also known as ISIS, the vote is no sure thing.

The Senate Armed Services Committee authorized such an effort as part of its annual Defense Authorization bill in May, but the full Senate has yet to take up the bill. A number of senators have voiced misgivings, even as Senate Majority Leader Harry Reid, D-Nev., has indicated he hopes to resolve the issue by the end of the week.

"It is increasingly impossible to sort out the so-called vetted moderate rebels from the truly bad rebels," Sen. Chris Murphy, D-Conn., the chairman of the Senate Foreign Relations panel on Europe, said in a Sept. 11 floor speech. "I want ISIS defeated in Syria. I want Bashar al-Assad to pay for his crimes against humanity. But too much can go wrong, for not enough possible gain, for the US to increase our involvement in the Syrian civil war."

When the House passed its version of the Defense bill in June, the Senate provision to arm the rebels was absent. The report accompanying the bill said the committee reserved "judgment on any plan to train and equip select elements of the Syrian opposition until it understands the details of such plan or proposed authority, including how it fits into a broader strategy and policy."

The debate comes almost 18 months after the top Democrat on the House Foreign Affairs panel, Rep. Eliot Engel, D-N.Y., first introduced similar legislation back in March 2013. The bill never went anywhere amid concerns that any weapons could end up in the hands of Islamist militant groups.

To break the logjam, Secretaries of State and Defense John Kerry and Chuck Hagel will personally visit Capitol Hill to directly appeal to lawmakers and the American public.

Hagel meanwhile will testify before the Senate Armed Services Committee on Sept. 16, along with Joint Chiefs of Staff Chairman Martin Dempsey.

On Sept. 15, the House intelligence panel is holding an exceedingly rare open hearing with former US officials to gauge their assessment of the threat posed by IS, al-Qaeda and other groups. Ryan Crocker, a former ambassador to Afghanistan, Iraq, Pakistan, Syria, Kuwait and Lebanon, is slated to testify, along with former US Central Command (CENTCOM) commander Gen. James Mattis.

The domestic ramifications of the IS threat will also be on the agenda.

The House Homeland Security Committee is holding hearings on the worldwide threats facing America as well as efforts to keep US skies safe while respecting Americans' privacy and civil liberties on Sept. 17-18. And the House Foreign Affairs panel on Europe will hold a hearing Sept. 19 on jihadists returning to Europe.

In other news, the special committee to investigate the Sept. 11, 2012, attack on the US mission in Benghazi, Libya, holds its first hearing on Sept. 17.

Finally, in a development that should be watched closely in Israel and Europe, the House Foreign Affairs panels on Europe and the Middle East are set to hold a joint hearing Sept. 18 on "the struggles of recovering assets for Holocaust survivors." Witnesses have yet to be announced.