A look at the Middle East issues Congress will be addressing the week of Sept. 28. 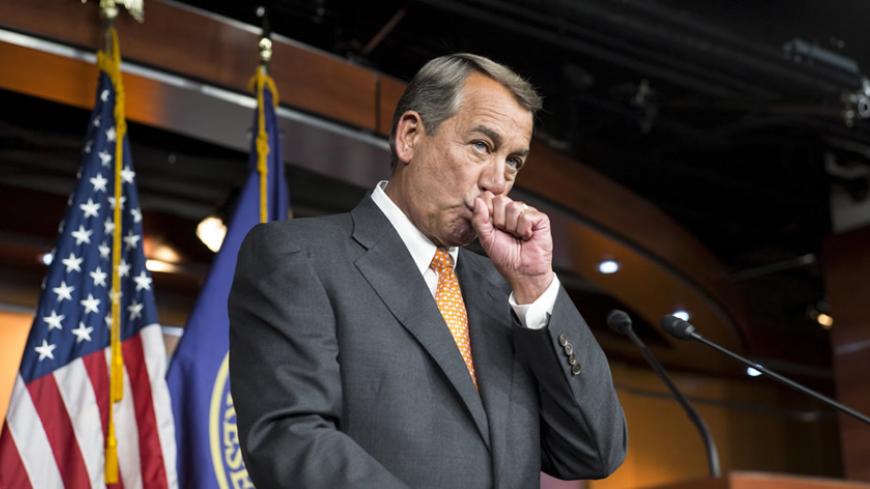 Speaker of the House John Boehner, R-Ohio, pauses during a news conference on Capitol Hill in Washington, Sept. 10, 2015. Boehner announced Sept. 25 that he would be stepping down. - REUTERS/Joshua Roberts

Republicans are launching a multipronged offensive to undermine the nuclear agreement with Iran after failing to vote it down.

The House of Representatives is expected to take up legislation this week that would prohibit sanctions relief until Tehran pays court-ordered damages to the families of terror attacks, House Majority Leader Kevin McCarthy, R-Calif., announced Sept. 25. The bill from Rep. Pat Meehan, R-Pa., would first require President Barack Obama to certify that Iran has paid $43.5 billion in damages — a clear violation of the terms of the July 14 agreement.

The vote is the latest evidence that the Republicans will preserve their pro-Israel, anti-Iran deal strategy despite a pending change of leadership that has raised concerns in Israel.

The surprise Sept. 25 announcement that House Speaker John Boehner, R-Ohio, would be stepping down at the end of October reverberated across the Israeli press, which highlighted his close ties to Prime Minister Benjamin Netanyahu and Boehner's decision to invite Netanyahu to address Congress about the dangers of the nuclear deal. Boehner's announced departure comes some 15 months after the surprise defeat of House Majority Leader Eric Cantor, R-Va., who had been in line to become the first Jewish House speaker before being undone by the same Tea Party forces that drove Boehner out.

The pro-Israel forces remain strong within the Republican Party, where House Republican Israel Caucus Co-Chairman Peter Roskam, R-Ill., is believed to be eyeing the No. 3 House majority whip spot after the chairs get reshuffled. Instead, Iran hawks appear more worried that the intraparty fighting could pave the way for Democrats to take back Congress and keep the presidency.

Cybersecurity will dominate the congressional debate this coming week, in the wake of Chinese President Xi Jinping's state visit and promises by both sides to play nicer. While China and Russia are the main concerns, Iran has also been cited as a cyberwarfare adversary.

On Sept. 29, the House Foreign Affairs terrorism panel holds a hearing on "US Counterterrorism Efforts in Syria: A Winning Strategy?" And the Eurasia subcommittee holds a hearing Sept. 30 on "the threat of Islamist extremism in Russia."

In the Senate, the Foreign Relations Committee will hold a hearing Sept. 29 on the US role in tackling the humanitarian crisis in the Middle East. Witnesses include International Rescue Committee chief David Miliband, Great Britain's former foreign secretary and brother of Ed Miliband, the former leader of the Labour Party; the routing of the party in the May 2015 parliamentary elections led to Ed Miliband's replacement by socialist member of parliament Jeremy Corbyn.

On Oct. 1, the committee votes on Obama's choice for ambassador to Tunisia, former special envoy for Syria Daniel Rubinstein. The vote comes as the House Foreign Affairs panel on the Middle East passed a resolution last week urging the country to reform its security services if it hopes to be recognized as a full-fledged democracy.

The Senate Judiciary Committee, meanwhile, holds a hearing Oct. 1 on the Obama administration's plans to accept many more refugees next year — including up to 10,000 Syrians. Finally, the Senate Banking panel marks up crude oil export legislation Oct. 1.

by Murielle KASPRZAK and Joseph SCHMID | AFP | May 26, 2022
END_OF_DOCUMENT_TOKEN_TO_BE_REPLACED