Congress threatens to shut down government over Syrian refugees

A look at the Middle East issues Congress will be addressing the week of Nov. 30. 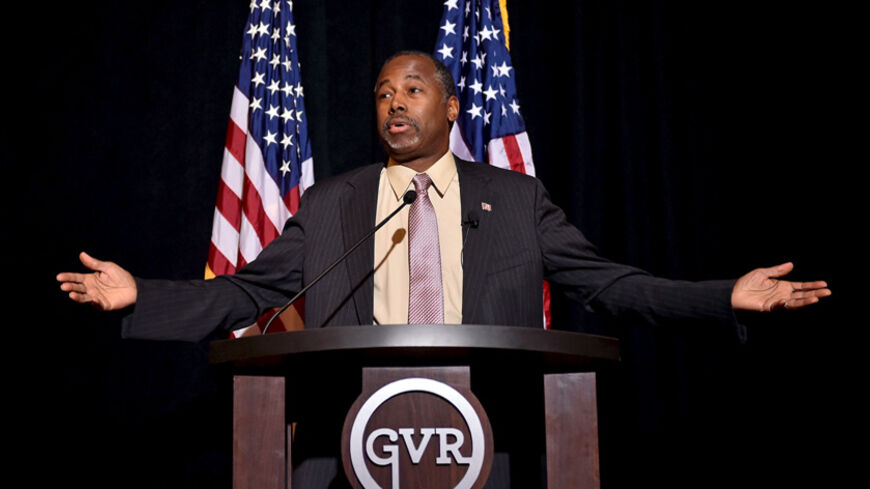 US Republican presidential candidate Ben Carson speaks at a news conference in Henderson, Nevada, Nov. 16, 2015. Carson announced that he sent a letter to Congress urging the termination of all public funding for the resettling of Syrian refugees into the United States. - REUTERS/David Becker

Republicans in Congress are threatening to shut down the government to keep Syrian refugees out of the country.

House lawmakers voted 289-137 Nov. 19 to suspend refugee admissions from Syria and Iraq amid fears that Islamic State (IS) terrorists could abuse President Barack Obama's plan to accept 10,000 Syrians over the next 10 months. Faced with a veto threat and recalcitrant Democrats in the Senate, House Republicans are now threatening a showdown over government spending to get their way.

Funding for the current fiscal year runs out Dec. 11. The year-end drama of recent years seemed likely to be averted after former House Speaker John Boehner, R-Ohio, worked out a comprehensive budget deal to help fund the government until next fall before stepping down.

That effort now seems in danger after the Paris attacks have prompted 74 House Republicans to demand that the spending bill include stronger guarantees about the refugee program's safety. Democrats opposed to the freeze argue that shutting the nation's door amid the worst refugee crisis since World War II would feed right into IS propaganda, while Republicans blame Obama's Middle East policy for fueling public angst.

The refugee debate has also bled into the presidential race, with Republican candidate Ben Carson visiting a refugee camp in Jordan during the Thanksgiving holiday.

Meanwhile, the Senate Judiciary Committee will vote Dec. 3 on legislation from rival candidate Sen. Ted Cruz, R-Texas, to strip US terrorism supporters of their citizenship. Similar legislation died five years ago when it was first introduced by then-Sens. Joe Lieberman, I-Conn., and Scott Brown, R-Mass., amid concerns that it violated the constitution and did little to protect the country.

The battle against IS will also take center stage Dec. 1 when the House Armed Services Committee holds a hearing on "US Strategy for Syria and Iraq and its Implications for the Region." Defense Secretary Ashton Carter and Joint Chiefs Chairman Joseph Dunford are slated to testify.

On Dec. 2, the House Foreign Affairs panel on terrorism holds a hearing to examine whether the Paris attacks represent a "strategic shift" for IS. And the Senate Foreign Relations Committee will hold a closed briefing Dec. 3 on the future of the US role in the Middle East with former Secretary of State Madeleine Albright and former National Security Adviser Stephen Hadley.

The hearings come amid increased chatter about the need for Congress to pass new legislation authorizing Obama's growing intervention in Syria and Iraq. Key Republicans, however, continue to argue that they first need to see a more comprehensive plan from Obama.

Finally, the full House Foreign Affairs Committee will hold a hearing Dec. 2 on "Iran’s Islamic Revolutionary Guard Corps: Fueling Middle East Turmoil." Cruz and House Homeland Security Chairman Michael McCaul, R-Texas, have introduced legislation urging the Obama administration to designate the IRGC as a terrorist group, but the administration says it already has the authorities it needs to sanction the group without antagonizing Iran as it continues to abide by its commitments under the nuclear deal.