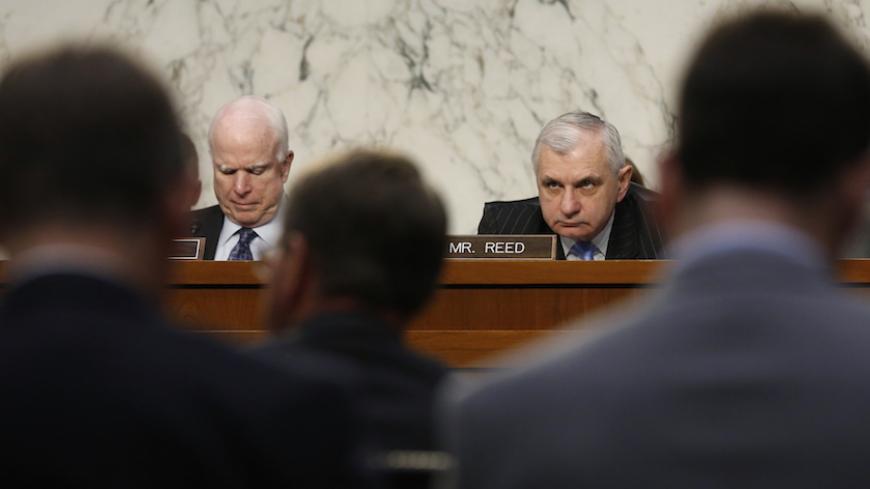 If at first you don't succeed, try, try again.

Congress is inching closer to handing the Pentagon another $349 million to train and equip a new group of Syrian rebels after last year's effort ended in abject failure. Senate Armed Services Committee Chairman John McCain, R-Ariz., released his hold on the money April 27 just as the House Armed Services Committee was voting to reauthorize the program as part of its defense bill for fiscal year 2017.

"On the issue of the reprogramming, yes I was, quote, blocking approval of the reprogramming until yesterday when I had a very excellent briefing from [Joint Chiefs Chairman Joseph] Dunford that cleared up the concerns that I had," McCain said at an April 28 hearing on the Islamic State (IS) with Dunford and Defense Secretary Ash Carter. "And why did I have those concerns …? It's because when we spent a couple of hundred million dollars the last time, the commander of Central Command testified before this committee that we had four or five people left."

The gradual reassessment in Congress follows a Department of Defense lobbying blitz to convince skeptical lawmakers that the US-trained forces are crucial to defeating IS in Syria. Carter in particular has made clear his frustration with congressional "micromanagement" through a funding process that requires approval by the House and Senate Defense authorization and appropriation panels, which have been sitting on the Pentagon's latest reprogramming request since last month.

"We're required to submit reprogramming requests, as you all know, to the four congressional defense committees. And so far, on these funds, we've received differing responses, on differing timelines. Sometimes with conflicting demands. We must get this working better going forward," Carter told McCain's panel. "I would also urge you and the other three defense committees to consider ending the reprogramming request for Syria, so that it's on equal footing with how you've structured your oversight of our train-and-equip programs in Iraq and Afghanistan. As it stands, the current setup invites troubling micromanagement of a wartime effort and risks inhibiting results."

The secretary delivered a similar message the day before at a Senate Appropriations Committee defense panel hearing on his budget request.

President Barack Obama's recent decision to send 250 more US troops to Syria "will help expand our ongoing efforts to identify, train and equip capable, motivated local forces inside Syria to help isolate and pressure Raqqa," Carter said at the April 27 hearing. "I should note, however, that Syria is an area where we need your help, particularly in releasing $349 million in … funds to help train and equip our partners on the ground. It's the centerpiece of our strategy there."

Specifics of the new mission for the Syrian rebels haven't been made public, but during the April 28 hearing Carter described them as "battle-hardened, proven anti-[IS] leaders whom we can make more capable as enablers and amplifiers of our effects."

"We made a disappointing start with that. No bones about that. We have changed the approach to that fundamentally," Carter told McCain's committee. "We were trying, when that program was initiated, to make … brand-new forces to counter [IS] in Syria. Our approach now is to identify — and this is where the [US] special forces are of value to us — forces already fighting [IS] whom we can enable with the great might of the American military. That's our new approach."

The House Armed Services Committee on April 27 defeated 52-9 an amendment by Rep. Tulsi Gabbard, D-Hawaii, to strike the train-and-equip program from the annual Defense bill. But the bill still requires an update on the strategy to "retake and hold" Raqqa as well as assurances that enough US troops have been deployed to ensure that the US-trained rebels are able to defend themselves against both IS and Syrian President Bashar al-Assad's forces.

Panel Chairman Mac Thornberry, R-Texas, made it clear that just because the committee has reauthorized the program doesn't mean it will sign off on funding it.

"We want, obviously, a plan on what's going to happen. I don't think all the questions have been answered yet," Thornberry told Al-Monitor. "There have been a series of reprogramming requests. As you heard in the debate last night, there are lots of concerns about the program. Because of the problems the program has had, because of the whole circumstances, I think extra oversight and extra vigilance in oversight is important."

Even McCain still has concerns despite allowing the funding to go forward. He pressed Dunford on whether the rebels would have anti-aircraft systems to protect against Syrian or Russian warplanes, and received a negative answer.

Providing the rebels with air defense systems would reassure their prime backers, such as McCain, that they won't be slaughtered as soon as they leave their training sites in Jordan. On the flip side, it would make the program an even tougher sell among lawmakers who have been skeptical all along.

"If a political solution to the Syrian conflict continues to elude diplomats in Geneva … what will become of the weapons and the equipment that we have provided to these rebel groups?" Sen. Mike Lee, R-Utah, who voted against the program back when it was launched in 2014, asked during the Armed Services Committee hearing. "Will we simply have dumped hundreds of millions of dollars' worth of equipment and worth of weapons into a volatile situation?"

Carter's less-than-reassuring answer: "In everything we do, there as elsewhere, we always think ahead when we're providing weaponry to a group about what's the future, what's the next step. So we certainly have thought about that."