Who is paying for America's plan to train and equip Syrian rebels?

Defense bill writers were told other nations will foot the bill. 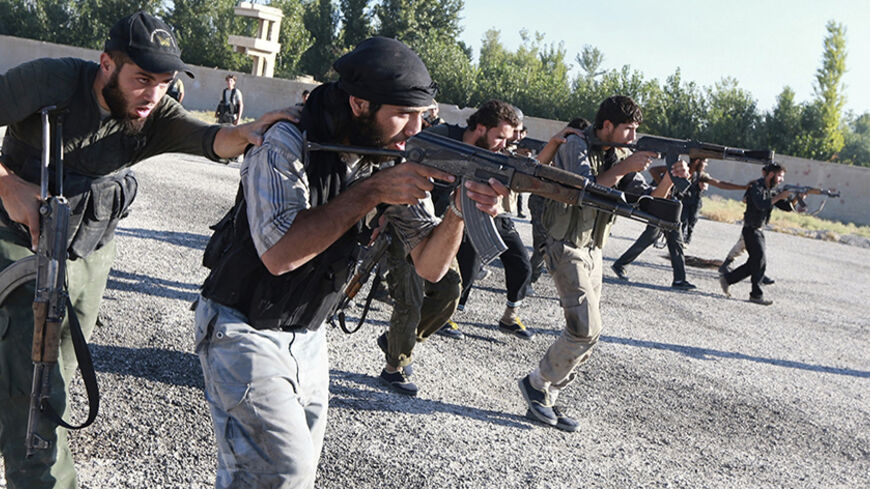 Rebel fighters demonstrate their skill with their weapons during a military display as part of a graduation ceremony at a camp in eastern al-Ghouta, near Damascus, Sept. 4, 2014. - REUTERS/Bassam Khabieh

The US House of Representatives passed an annual defense bill on Dec. 4 that makes it clear that US allies will pick up a sizable part of the tab for President Barack Obama's plan to train and equip vetted rebels in Syria.

The National Defense Authorization Act permits the mission for the next two years but does not specify a maximum spending amount, even though Obama had asked for $500 million when he unveiled the plan in June. Committee sources say that's because there's enough money for now, after moving around existing funds and factoring in foreign contributions.

"There is reprogramming authority," a House Armed Services Committee aide told Al-Monitor, "but the administration said they did not need funding because other countries will pay for the program."

The bill includes an "authority to accept contribution" that spells out other countries' role. Congress first approved the mission back in September but that authorization expires Dec. 11.

"Other countries are paying for some of the training and equipping," he told Al-Monitor.

Some partners in the effort have already made themselves public.

Saudi Arabia announced in September that it was willing to host the mission on its soil. Since then Turkey has also agreed to participate, according to the State Department, raising questions about just who their main target would be, Islamic State or Bashar al-Assad.

The train-and-equip mission has proved one of the most controversial parts of the must-pass defense bill, with several lawmakers citing it as their reason for voting against it. Rep. Chris Van Hollen, D-Md., the top Democrat on the House Budget Committee, tried to force a vote on the issue but was overruled.

In a letter to House Speaker John Boehner, R-Ohio, Van Hollen asked for a stand-alone vote on the provision, raising concerns in particular that it doesn't include a dollar figure. The letter was signed by 11 members of both parties.

"This NDAA provision is written so that — with the sole consent of the four defense committees — the amount could well exceed the requested $500 million," the letter states. "Additionally, the movement of American forces on the ground in other countries of the region is a very consequential decision."

Levin's committee late last month signed off on a Pentagon request to reprogram $225 million in existing funds for the train and equip mission, a White House source told Al-Monitor. That's less than half the original $500 million figure, but several lawmakers told Al-Monitor extra funding might be included in the 10-month spending bill that the House and Senate are trying to reach agreement on before the Dec. 11 deadline for funding the government.

"I would hope so," said Sen. Lindsey Graham, R-S.C., who sits on both the Armed Services Committee and the Appropriations panel with jurisdiction over Defense spending. "While [foreign countries] will do the lion's share we'll have some American component — [the trainers] will need some money to get over there. I don't want to become a subdivision of the Saudi army."

It's not clear how much funding may be included — if any.

"All funding and policy issues are still under negotiation," said Jennifer Hing, communications director of the House Appropriations Committee.

"The real issue is that it will require a significant increase in funds as the program expands," said Oubai Shahbandar, an adviser for the Syrian National Coalition in Washington. "In order to ensure that your allies have your back, you also have to demonstrate to your allies that you're fully invested."