Obama asks Congress to 'ramp up' support for Syrian opposition

The White House is asking Congress to authorize the US military to train vetted Syrian rebel forces. 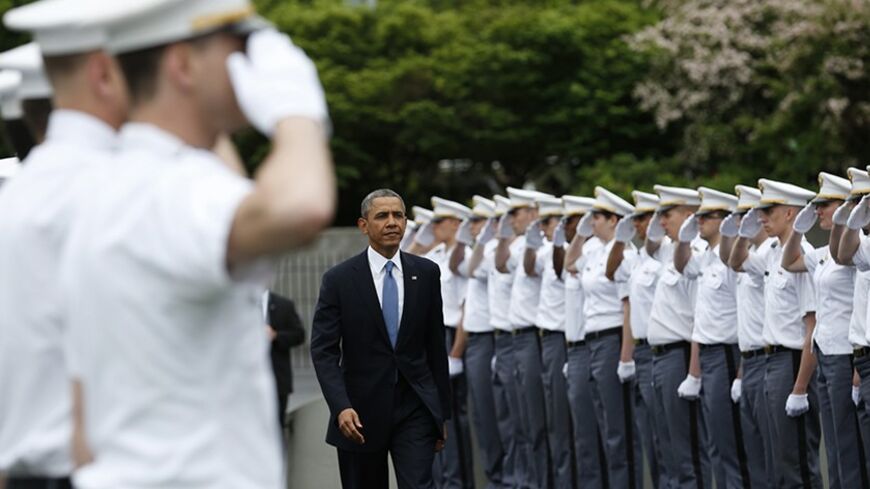 President Barack Obama arrives for the US Military Academy commencement at West Point, May 28, 2014. - REUTERS/Kevin Lamarque

President Barack Obama is once again turning to Congress to approve a stepped-up US role in Syria, despite being rebuffed last year.

The president in his commencement address at West Point on Wednesday announced his desire to "work with Congress to ramp up support for those in the Syrian opposition who offer the best alternative to terrorists and a brutal dictator." He also asked lawmakers to approve a new $5 billion counterterrorism fund, aimed in part at combating Syrian extremists.

Earlier in the day, Secretary of State John Kerry made similar overtures to Congress as he made the rounds of morning news shows to preview the president's speech.

"In the days ahead," Kerry told CBS, "we will be working very closely with Congress to engage in additional assistance to the moderate opposition."

A senior administration official briefing reporters after the speech made it clear the president was talking about proposals to have the Defense Department take over training of vetted rebel groups.

The CIA has been running a small-scale covert training program out of Jordan since last year, but turning it over to the Pentagon would allow the US to train many more fighters — and perhaps help turn the tide of the war.

"If you look at the different options for providing assistance," the official said, "the US military would need certain additional authorities and resources to be able to step up with assistance to the Syrian opposition."

The request comes eight months after Congress balked at authorizing military strikes against Bashar al-Assad's regime over its alleged use of chemical weapons.

Lawmakers however have offered early indications that they could get behind an enhanced training mission.

The Senate Armed Services, led by chairman Carl Levin, D-Mich., in particular voted 25-1 last week to approve an annual defense bill (NDAA) that "authorizes the secretary of defense to provide equipment, training, supplies, and defense services to assist vetted members of the Syrian opposition," according to a summary of the bill, which has not yet been made public.

"You see in the language of the Levin provision that just moved though committee the types of authorities to the secretary of Defense that would enable him to provide assistance to the vetted Syrian opposition," the senior administration official said. "I think that indicates an emerging view in Congress that is supportive of providing that kind of authority to the United States military."

Sen. Tim Kaine, D-Va., the chairman of the Senate Foreign Relations panel on Near Eastern and South and Central Asian Affairs, issued a statement saying he was "encouraged to hear about increased efforts to support vetted members of the Syrian opposition and assist Syria’s neighbors."

Some House members remain skeptical, however.

"There are a lot of questions that need to be answered: Where are we going to do the training? Who is going to do it? And who's going to do the vetting?" a staffer for a key House Republican told Al-Monitor. "The vetting is really the key issue; how do we know we're not hurting ourselves in the long run?"

"This will require sustained US engagement, which has been absent to date, but that this national security threat demands," Royce said in a statement. Like elsewhere around the globe, the President has been late in responding to this crisis."

Meanwhile, the Western-backed opposition is lobbying Congress to approve the proposal.

"The Syrian opposition is supportive of a Department of Defense-led effort to train and equip moderate Free Syrian Army forces who are fighting Assad's militias and Al Qaeda factions," Oubai Shahbandar, a top adviser to the Syrian Opposition Coalition, told Al-Monitor in an email. "If the decision is made by the administration and Congress to authorize a robust DoD train-and-equip effort, it would augment ongoing strategic support programs being run by the United States and regional allies. Since the passage of the NDAA from the Senate Armed Services Committee with a 25-1 vote last week, we have been working closely with Congress in assuring officials that the opposition is ready and willing to work with the US and allies to oppose extremism and put Syria on a path of genuine transition to democracy."

The administration is also pushing for the adoption of a $5 billion Counterterrorism Partnerships Fund that aims to "provide the flexibility and resources required to respond to emerging needs as terrorist threats around the world continue to evolve," according to a fact sheet from the White House.

The new fund would notably allow the Defense Department, in partnership with other agencies, to:

• More effectively facilitate and enable the counterterrorism efforts of our partners on the front lines.

"These resources will give us flexibility to fulfill different missions, including training security forces in Yemen who have gone on the offensive against al Qaeda; supporting a multinational force to keep the peace in Somalia; working with European allies to train a functioning security force and border patrol in Libya; and facilitating French operations in Mali," Obama said in his speech.

He also outlined a role for the new fund with regard to Syria.

"With the additional resources I’m announcing today," Obama added, "we will step up our efforts to support Syria’s neighbors — Jordan and Lebanon; Turkey and Iraq — as they contend with refugees and confront terrorists working across Syria’s borders."

Congressional appropriators said they haven't been briefed about the proposed fund yet, and couldn't comment on it. The fund is expected to require action in both the House and Senate by the Appropriations panels on defense and state/foreign operations, as well as the Armed Services committees.