New Senate legislation, coupled with the Obama administration's push for more Middle East partnerships, have activists worried about US support to controversial allies. 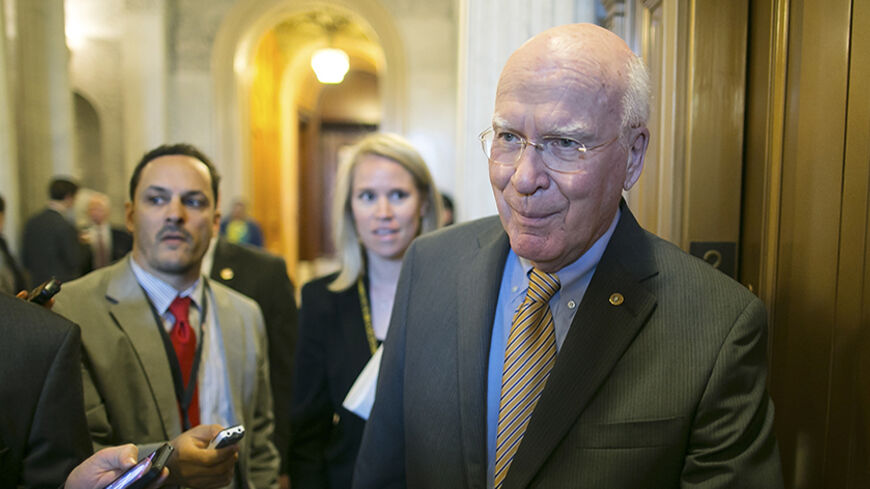 Sen. Pat Leahy, D-Vt., talks to reporters after the weekly Democratic caucus luncheon at the US Capitol in Washington, April 29, 2014. - REUTERS/Jonathan Ernst

The Senate's defense legislation unveiled this week is raising concerns among human rights activists that the Pentagon could sidestep aid prohibitions in its quest to beef up counterterrorism partnerships with awkward allies in the Middle East and elsewhere.

While seeking to codify long-standing aid restrictions into permanent law, the 2015 National Defense Authorization Act (NDAA) has carved out new exemptions that have set off alarm bells among activists.

The law comes as the Obama administration has been moving toward more counterterrorism partnerships following the withdrawal of US troops from Iraq and Afghanistan.

"People are paying attention to it," one human rights activist told Al-Monitor. "Experts are very aware of the changes — and very concerned by them."

At issue are the so-called Leahy laws — named after Judiciary Committee Chairman and top foreign-aid appropriator Patrick Leahy, D-Vt. — that have placed restrictions on US foreign assistance to human rights abusers since 1998.

The issue once again pits Leahy, a top human rights champion in Congress, against administration officials who want more freedom to partner with foreign nations on counterterrorism and other issues. Leahy's concerns are already leading the administration to hold up the delivery of $650 million in military aid and 10 attack helicopters to Egypt, Al-Monitor reported this week.

President Barack Obama has made clear he wants to see more such partnerships — particularly in the Middle East.

"As we move to a train-and-advise mission in Afghanistan, our reduced presence allows us to more effectively address emerging threats in the Middle East and North Africa," the president said at his West Point commencement address last week.

The president went on to call on Congress to create a new $5 billion Counterterrorism Partnerships Fund to "train, build capacity, and facilitate partner countries on the front lines."

Experts believe the fund, if created, would mostly fall under the purview of the Defense Department — and thus under the provisions of the new bill, if it becomes law.

"These resources will give us flexibility to fulfill different missions," the president said, "including training security forces in Yemen who have gone on the offensive against al-Qaeda; supporting a multinational force to keep the peace in Somalia; working with European allies to train a functioning security force and border patrol in Libya; and facilitating French operations in Mali."

The restrictions on State Department aid, which affect security assistance programs such as Foreign Military Financing (FMF) and International Military Education and Training (IMET), have been codified through amendments to the 1961 Foreign Assistance Act.

Section 620M now states that "no assistance shall be furnished … to any unit of the security forces of a foreign country if the Secretary of State has credible information that such unit has committed a gross violation of human rights."

Defense Department restrictions, however, have historically been dealt with on a year-by-year rather than a permanent basis, though appropriations bills and riders to annual authorization legislation. This year's NDAA seeks to change that by codifying the restrictions into permanent law.

"We want to train people to behave themselves relative to human rights. We want to obviously equip foreign units to go after terrorists. And we want to do that in a way that is permanent, so that it's not a yearly issue — so that it's not just an annual appropriation," Senate Armed Services Chairman Carl Levin, D-Mich., told Al-Monitor in a hallway interview. "The goal is to try to make this a permanent fixture, but to do it in a way that allows us to train and equip people who we want to train and equip, and also to have human rights training."

"The inclusion of the language in an authorizing bill is really important — they're trying to add it to US Code. It shows a congressional commitment to ensure security assistance doesn't go to abusive foreign forces," the activist said.

The details of the bill's Leahy language — Section 1202 — however have raised concerns that the Department of Defense could too easily ignore the restrictions if they proved inconvenient.

The defense bill, which cleared committee on a 25-1 vote, affects tens of millions of dollars of Pentagon spending on foreign assistance annually through programs such as Section 1206 Security Assistance for training and equipment of foreign militaries for counterterrorism and security operations and Section 1207 Security and Stabilization Assistance.

"If there isn't good Leahy law language in the Defense authorization and appropriation laws," the source said, "it's subject to be used by all kinds of security forces."

Specifically, some human rights watchers are concerned that the bill's restrictions on "training, equipment, and other assistance" — with "other assistance" defined as "assistance whose primary purpose is to build the capacity of a foreign security force" — may prove too narrow. And they point to language in the bill that creates a new exception allowing for aid to continue flowing to units credibly accused of a "gross violation of human rights" as long as it's ''to conduct human rights training of foreign security forces."

"It sort of allows a loophole for things outside of that to move forward, where Leahy law would previously restrict it," another human rights source told Al-Monitor. "You could make a case for saying: 'Well, this assistance doesn't actually build the capacity — it does other things, it's more about exchanges, or human rights training, or management training for security forces but not the kinetic types of training that makes them stronger fighting forces, so we're going to go ahead and continue doing those things. And I think a lot of people look at that and say: 'No, the point of the law — and the spirit of the law — is that we shouldn't maintain a formal relationship with these units that have a bad track record."

The human rights training exemption, the source added, is "the same kind of argument: You're finding ways to continue the relationship and continue providing assistance and training to these units, that otherwise the law would restrict."

The slippery slope concerns come as the US military has recently rekindled criticism that Leahy restrictions have hampered the military's ability to partner with foreign militaries in strategic places such as South Sudan and Mali. The law restricted US assistance in some form or other to 46 countries around the world in 2011, according to The New York Times.

"The increasing Department of Defense (DOD) emphasis on expanding US partnerships and building partnership capacity with foreign military and other security forces has refocused congressional attention on" the Leahy laws, the Congressional Research Service said in a review of the laws earlier this year.

The recent kidnapping of hundreds of girls in Nigeria has been the biggest flashpoint, however, with House Foreign Affairs Chairman Ed Royce, R-Calif., urging the State Department to ask for a waiver from the law during a hearing last month. Leahy has pushed back, saying that his law doesn't preclude all US assistance to Nigeria as it combats Boko Haram and searches for the missing girls.