What happened to billions in US military aid to Egypt?

The Obama administration has provided Cairo with $6.5 billion in military aid since 2011 but can't account for all of it, according to a new government report. 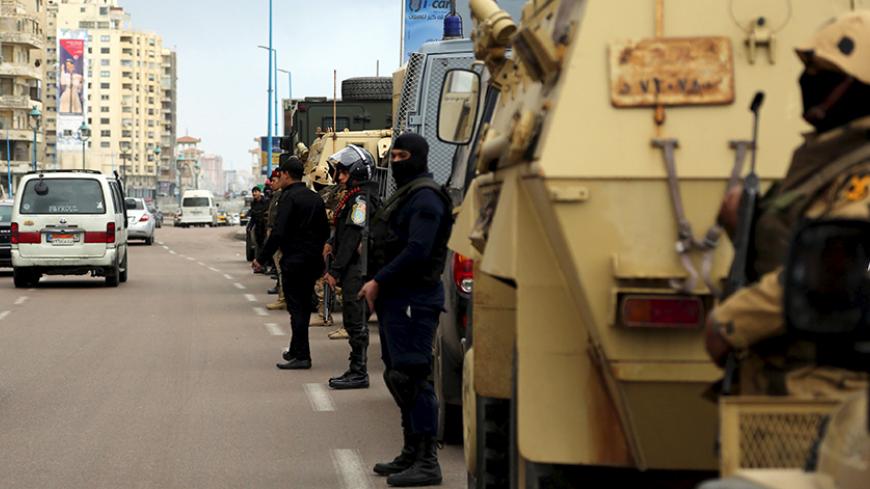 Security forces stand guard in Alexandria during the fifth anniversary of the uprising that ended the 30-year reign of Egyptian President Hosni Mubarak, Jan. 25, 2016. - REUTERS/Asmaa Waguih

The Egyptian government is hindering Washington's ability to track billions of dollars worth of anti-aircraft missiles and other US weapons, the US government watchdog said in a blistering report just as Congress gets ready to renew the annual $1.3 billion request.

The United States provided $6.5 billion in military assistance to Cairo between 2011 and 2015 with the understanding that it would be closely monitored and it would serve American interests. Instead, the Government Accountability Office (GAO) asserts that the Obama administration has often failed to meet those requirements due to resistance from their Egyptian counterparts, lack of guidance from Washington and insufficient staffing at the US Embassy in Cairo.

The State Department and the Defense Department (DOD) have established programs "to provide reasonable assurance that military equipment transferred or exported to foreign governments is used for its legitimate intended purposes and does not come into the possession of individuals or groups who pose a threat to the United States or its allies," the GAO said in its May 12 report. "However, gaps in the implementation of these end-use monitoring programs — in part due to limited cooperation from the Egyptian government — hampers DOD's and State's ability to provide such assurances."

The much-anticipated report also raised concerns with congressionally mandated vetting for the recipients of US military training and equipment.

"The US government completed some, but not all, human rights vetting required by State policy before providing training or equipment to Egyptian security forces," the GAO report states.

Among the report's key findings: Egyptian officials hindered US officials' efforts to confirm that US equipment such as Stinger rocket launchers and night-vision goggles were used appropriately; the DOD could not document that it completed end-use monitoring prior to 2015; and the State Department has yet to establish a process for conducting human rights vetting when providing equipment to Egyptian military units, despite agreeing to do so in 2011.

"GAO's report shows an alarming and unacceptable amount of deficiencies in our end-use monitoring and human rights vetting programs in Egypt," Ros-Lehtinen said in a statement. "End-use monitoring must be fully utilized in order to ensure US-supplied and US-origin defense articles are used properly. Appropriate vetting of Egyptian forces must be performed to the fullest extent possible to ensure human rights are protected. The administration cannot allow these deficiencies to go unaddressed and must immediately take action to ensure all security equipment is being properly monitored and all recipients of both training and equipment are fully vetted."

Connolly went further and flatly told Al-Monitor that Congress should rethink its annual $1.3 billion military assistance package for Egypt in the wake of the report.

"While there are important strategic underpinnings to our security cooperation with Egypt, our Egyptian counterparts must understand that US assistance will not be used to carry out activities that run counter to American values," he said in a statement. "The stonewalling of US government officials carrying out vetting requirements enshrined in statute is entirely unacceptable and must be raised with Egypt at the highest levels of government."

GAO investigators found no evidence that any Stinger missile launchers had gone missing. However, they discovered that the alarm systems and closed-circuit televisions at two bunkers where they are kept weren't operational because of US funding shortfalls.

In another striking example, the United States provided satellite components to the Egyptians with the understanding that State Department officials would be able to monitor their use. When they got around to it, however, the satellite had already been launched.

One of the most damaging findings of the report could be its assertion that the State and Defense departments are not in compliance with congressional human rights vetting requirements for military training and equipment, which are named after Sen. Patrick Leahy, D-Vt.

"We determined that the US government did not conduct required vetting before providing training for some of the Egyptian security forces," GAO found. "By not conducting all required human rights vetting prior to providing US training to Egyptian security forces, State and DOD are not in compliance with their policies regarding human rights vetting."

The report could have a significant impact on congressional purse-string holders as they finalize their foreign aid spending bills for the coming fiscal year.

Senate foreign aid panel chairman Lindsey Graham, R-S.C., has called for an emergency appropriation and a "Marshall Plan" for Egypt to combat the Islamic State insurgency in the Sinai Peninsula. But Leahy, who serves as the top Democrat on the panel, has long fought to preserve strict conditions on military aid.

The State Department last month wrote to Leahy and other Egypt critics to assure them that security assistance to Cairo was being properly vetted. The GAO report calls that assertion into question.

"State currently attests in memos that it is in compliance with the Leahy law," the report says. "However, without vetting policies and procedures, the US government risks providing US equipment to recipients in Egypt in violation of the Leahy laws."

The Obama administration's separate request for $150 million in economic aid for Egypt is already getting a rocky reception on Capitol Hill, following reports that $500 million to $700 million in previous-year funding is stuck in the pipeline because Cairo isn't cooperating.

A more detailed report was made available to Congress in February but kept from public view by the Obama administration.

Items excluded from the redacted version include "details of some training the United States provided to Egyptian security forces; [GAO's] estimate of the percentage of Egyptian security forces that were trained with US assistance from seven accounts in fiscal year 2011 through March 31, 2015, who were not vetted for human rights violations; and the details of challenges experienced by State officials implementing human rights vetting," the GAO report states. "This public version also excludes information on the number of defense articles purchased by Egypt from the United States, which DOD deemed to be sensitive but unclassified."

The report is the third and final installment in a series that Ros-Lehtinen and Connolly had requested in June 2013, at a time when then-President Mohammed Morsi's policies and the Egyptian judiciary's crackdown on US and domestic nongovernmental organizations were creating bipartisan concerns on Capitol Hill. The first report had identified potential risks in providing democracy and governance assistance in Egypt, while the second had described a clogged economic aid pipeline.