Congress ponders next move as Egypt clogs its own funding pipeline 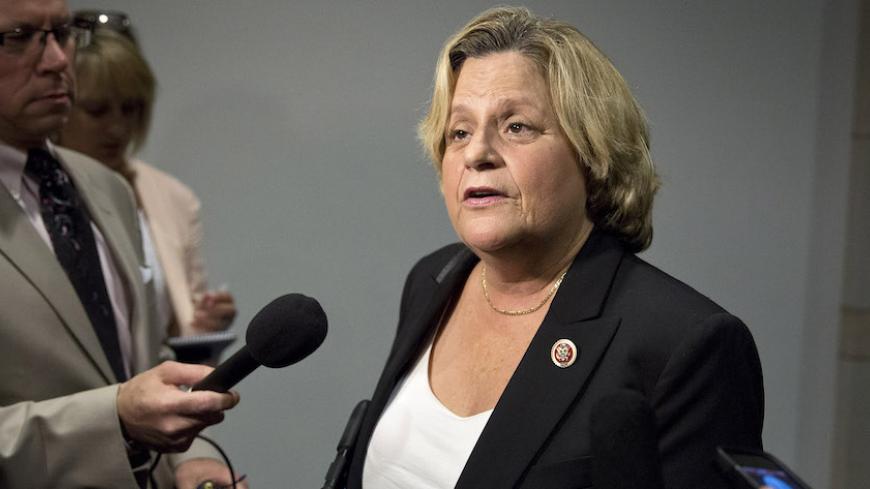 US Rep. Ileana Ros-Lehtinen, R-Fla., speaks to the media at the US Capitol in Washington, Sept. 1, 2013. She is making an issue about US funding for Egypt. - REUTERS/Joshua Roberts

Key US lawmakers are questioning the wisdom of giving yet more money to Egypt when Cairo is sitting on more than half a billion previously appropriated dollars.

Rep. Ileana Ros-Lehtinen, R-Fla., the chairwoman of the House Foreign Affairs panel on the Middle East, brought the issue up during an April 13 hearing on the State Department's budget request. She suggested the Obama administration's annual request for $150 million in economic assistance could prove a tough sell amid reports that the Egyptian government is blocking myriad US grants from moving forward.

"In Egypt we are facing a significant pipeline issue where between $500 million to $700 million in previous years’ funds have not been spent nor obligated," Ros-Lehtinen said. "Yet the administration continues to request $150 million in ESF [economic support funds] for Egypt, without presenting a concrete plan on how it will spend these unobligated funds and without having the flexibility to operate in Egypt that we once had."

Both Republican and Democratic staffers confirmed to Al-Monitor after the hearing that there is interest in the Foreign Affairs Committee to reallocate at least some of the Egyptian aid, if only to send Cairo a message. But they questioned whether there's much appetite to do so among their Appropriations Committee colleagues who actually hold the purse strings.

In the Senate, foreign aid appropriations Chairman Lindsey Graham, R-S.C., last week proposed an emergency supplemental of "multiple billions" for Egypt and several other Middle East nations rather than an aid cut. And members on both sides of the aisle appear to agree that the $1.3 billion in annual military assistance that makes up the bulk of US bilateral aid to Egypt is here to stay amid Islamic State attacks in the Sinai Peninsula and elsewhere.

The Egyptian Embassy in Washington did not respond to a request for comment.

One possible beneficiary of a reallocation: Tunisia. While the State Department's budget request seeks a $20 million boost in economic assistance, the Tunisian Embassy in Washington has been pressing Congress to restore an equivalent cut in military aid.

"Tunisia is strategically important, and this is where the democratic transition has been referred to by the administration as a model for other states in the Arab world. However, when compared to Egypt, Jordan or even Lebanon, our aid package to Tunisia does not really indicate that the administration views its future as a high priority," Ros-Lehtinen said at the hearing. "The people and government of Tunisia need us now more than ever."

Some democracy activists are openly arguing for such a shift in priorities.

"Every year, administration officials struggle to pull together funds to respond to urgent crises and new opportunities, while there are hundreds of millions of dollars left sitting on the table in Egypt," said Cole Bockenfeld, the deputy director for policy at the Washington-based Project on Middle East Democracy. "If the Egyptian government refuses to cooperate with the US on development programs, the emerging democracy in Tunisia is a prime candidate for more assistance — its government faces mounting economic and security challenges, and has shown a real desire to work with the US to help meet those challenges."

State Department officials testifying at the hearing acknowledged concerns with the human rights and security situation in Egypt. But they made the case for continued support to programs that can encourage international investments and job creation in the Arab world's most populous country.

"Given the current challenging environment," USAID official Paige Alexander testified, "USAID continues to focus its program in areas where we believe we can achieve immediate results and will continue to consult with Congress as discussions progress with the government of Egypt."

Congressional concerns date back to a Government Accountability Office (GAO) report last year, which found that $460 million out of $1.4 billion in economic support funds appropriated between 2009 and 2014 remained unobligated. The GAO report faulted "ongoing changes in Egypt’s political leadership" and "various congressional holds and legal restrictions" for the backlog, which ballooned as Congress and the Obama administration held up aid out of concern both with President Mohammed Morsi's leadership and with the military coup that deposed him.

Since President Abdel Fattah al-Sisi's May 2014 election, however, the backlog has only gotten worse. US officials say the Egyptian government is to blame.

"For the bulk of our ESF assistance currently, US agencies and departments enjoy collaboration and appreciation from their Egyptian government counterparts," a State Department official told Al-Monitor in an emailed statement. "However, over the past year, some ESF implementing partners have encountered difficulties in obtaining the Egyptian government approvals necessary to do their work, which has contributed to the large pipeline. We are working with the Egyptian government to address these problems and will look forward to working with Congress as we move forward."

The North Carolina-based Research Triangle Institute (RTI) is a case in point.

The nonprofit organization has been providing technical assistance to the Egyptian education system for many years and was recently awarded projects for primary learning and higher education partnership. But it has struggled to get the final approvals it needs to move forward amid a renewed crackdown on civil society, including revived investigations into nongovernmental organizations accused of taking foreign funding.

The situation hasn't been helped by the proliferation of conspiracy theories about hostile foreign powers in the Egyptian media. An April 6 article in the Youm 7 newspaper, for example, bragged of having penetrated "the secret US file to spy on Egypt."

"While we remain optimistic that these issues will ultimately be resolved," Williams told Al-Monitor in an emailed statement, "we are concerned that recent Egyptian media coverage has included gross inaccuracies and unfounded inflammatory statements regarding the good work RTI has accomplished both in Egypt and around the globe."

He struck a note of optimism that the situation will eventually be resolved and that RTI's US-funded assistance can resume.

"We believe that our education projects are a great asset for the Egyptian people and that ultimately that view will prevail," he said. "While we understand that the overall situation in Egypt is the subject of higher level discussions between the respective governments, we are focused on implementing educational assistance projects that will benefit the Egyptian people and society."