Lawmakers are split over whether they have a friend in Abdel Fattah al-Sisi. 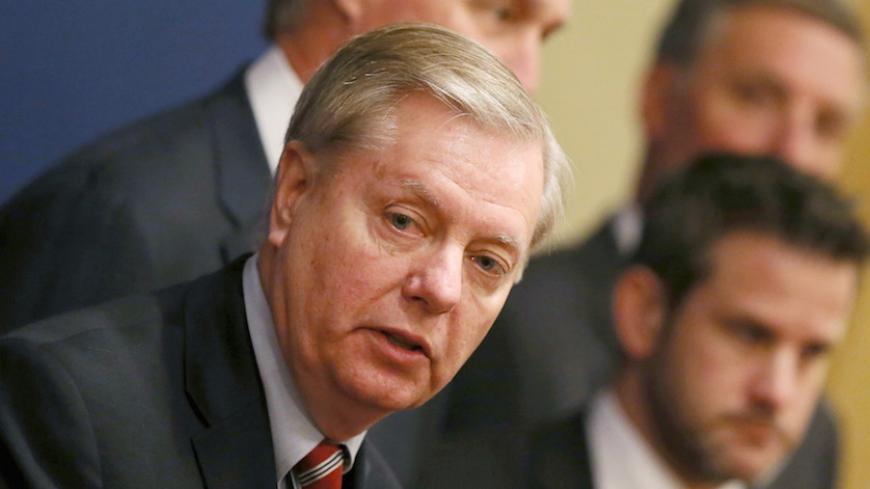 A top US senator is floating an ambitious proposal to rebuild Egypt and other Middle East trouble spots, prompting congressional soul-searching into whether the region's strongmen have any desire to change.

The chairman of the Senate Appropriations panel on foreign aid, Sen. Lindsey Graham, R-S.C., laid out his vision for a "Marshall Plan" in an April 7 briefing with reporters following his trip to the region. As a preliminary step, he said he would work within his subcommittee on emergency funding of "multiple billions" of dollars for Egypt and several other countries.

"One thing I will talk to [Democratic counterpart Patrick] Leahy [D-Vt.] about is an emergency appropriation that will help Egypt, Jordan and probably Lebanon to deal with the stresses they're facing," Graham told reporters. "And we need to get some money into the system to help Israel create some capabilities to shore up borders that have been compromised."

Graham made the remarks following a congressional delegation he led to Egypt, Saudi Arabia, Turkey and Israel, during which he and several other lawmakers met with President Abdel Fattah al-Sisi and other national leaders. Separately, House Speaker Paul Ryan, R-Wis., also met with Sisi on April 7.

"I was stunned at how things have deteriorated," Graham said, notably in Egypt's Sinai Peninsula bordering Israel. "If you go to Egypt and don't realize they need some help yesterday, you're making a huge mistake."

Graham did not offer specifics about his proposed emergency appropriation, which would go beyond the $1.3 billion in military aid and $150 million in economic assistance that the State Department has requested for the fiscal year that starts Oct. 1. Several senators who went on the trip with him also argued for beefed up support for Cairo.

"We came back with a renewed sense of urgency about what we should be doing in that part of the world to help address some of the crisis issues," Senate Foreign Relations member David Perdue, R-Ga., told Al-Monitor. "[Sisi] has the potential of being a great partner of the United States. Yes, there are issues, and we had some very strong conversations. But we walked away with a sense of encouragement that he recognizes the balance that needs to be had."

"If you take a look at Egypt, we have two things that we need to do there: We need to figure out what more we can do to provide them with the capabilities to take the fight to [the Islamic State], in particular in Sinai," he said. "We also need to work with them on economic relationships. Their economy is in serious trouble. The foreign direct investment is anemic. Their tourism is almost nonexistent. So we've got to figure out how we work on those fundamentals that also allow the president to continue to gain the popular support that he needs to stabilize and strengthen his military."

But Graham may have a harder time inside his own spending panel. Leahy, for one, recently wrote a letter to Secretary of State John Kerry asking him to investigate "allegations of gross violations of human rights" in Egypt and Israel.

"Egypt of course is in violation of a lot of aspects of the Leahy law," Leahy told Al-Monitor. "I'll talk with [Graham]."

Other panel members were equally skeptical.

"Maybe we ought to do some emergency appropriations for the crises in our own country before we start spending money on other people's crises," Sen. Chris Murphy, D-Conn., told Al-Monitor. "I think [the Egyptians] still have a lot to prove. [Their] prisons have become a hotbed of anti-Americanism. This isn't just about a potential threat to Sisi — this is also a potential threat to the United States. I think as long as there's real conditionality applied to the aid, I'm willing to consider it."

The business community could give Graham's proposal a boost. The American Chamber of Commerce in Egypt will be sending some 40 top-level executives to Washington later this month to make the case for increased US investment and political support for the Arab world's most populous country.

"We do have a current-account hole because of tourism going down the tubes because of terrorism," said Hisham Fahmy, CEO of AmCham Egypt Inc. He said Egypt could use "exceptional appropriations funds or loan guarantees," but he questioned the political appetite for such legislation.

Complicating matters, the US aid pipeline to Egypt is already backlogged with many hundreds of millions of dollars in unused support. A Government Accountability Office (GAO) report last year found that $460 million out of $1.4 billion in economic support funds appropriated between 2009 and 2014 remained unobligated, and that number has only grown since then.

The GAO report faulted "ongoing changes in Egypt’s political leadership" and "various congressional holds and legal restrictions" for part of the backlog. The State Department has asked Congress to stop conditioning aid to Egypt on progress on human rights, but the proposal is a hard sell.

"Get back with me about that one," Graham told Al-Monitor. "It might be a bridge too far."

After the emergency aid bill, Graham said he wants to start a conversation about helping build institutions in a dozen fragile states from Libya to Yemen along the model used to rebuild post-World War II Europe. He envisioned a global effort that would promote education, democracy and women's rights across the region as an antidote to terrorism.

"Al-Sisi doesn't want to be the dictator of a failed state," Graham said. "Are we throwing good money after bad? I don’t think so, but I’m running out of ideas."

Such a plan, Graham said, would allow Egypt to have access to lower-interest loans and preferential trade agreements while bolstering the country's civil society.

"The Marshall Plan worked in Europe because we were rebuilding economies that had functioned well, not building over a nearly hopeless Egyptian economy," said Elliott Abrams, the top official in charge of democracy promotion under President George W. Bush. "Because the army owns half the economy, it will always block the real reforms needed."

Appropriations member Chris Coons, D-Del., said he will need to see a convincing case for emergency aid. But he gave Graham kudos for starting a larger conversation.

"Sen. Graham and I share a concern about having a longer-term plan for stabilizing fragile and failed states across the Middle East and North Africa," Coons told Al-Monitor. "I commend Sen. Graham for saying 'here is an ongoing, serious challenge to security in the region that we probably should be investing in now and will need additional resources next year' and starting a conversation. I don't know how far that conversation will go. I look forward to seeing the specifics of his proposal."