Apache helicopters remain in storage six weeks after the Obama administration announced their release to the Egyptian government. 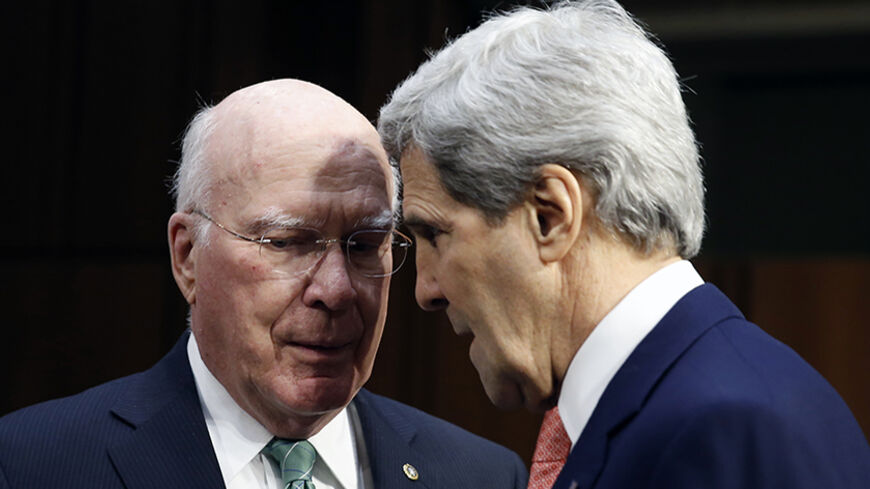 US Secretary of State John Kerry talks with Sen. Pat Leahy as he arrives to testify at a Senate hearing about fiscal year 2015 in Washington, March 13, 2014. - REUTERS/Kevin Lamarque

The Obama administration is still waiting to ship 10 Apache attack helicopters whose release was announced back in April, bowing to pressure from Congress, but angering newly elected President Abdel Fattah al-Sisi in the process.

The helicopters are already paid for under a 2009 agreement with Egypt to fight militants in the Sinai desert. Secretaries of State and Defense John Kerry and Chuck Hagel announced their release April 23, but they remain in storage in the United States amid concerns they could be used against civilians.

"The aircraft are in storage at Fort Hood, Texas," a State Department official confirmed to Al-Monitor. "We are making decisions with respect to our assistance to Egypt in consultation with Congress, and are working to determine when the Apaches would be shipped."

The delay has frustrated the new Egyptian government, which has started a full-court press to get Congress and the administration to restore the $1.3 billion in annual military aid the country has been receiving since its 1979 peace treaty with Israel.

"What we have been trying to say for the past couple of months or more, is that there is a dire need for the Apaches for the operation in the Sinai," an Egyptian official told reporters in Washington at a briefing this week. "We are not the only ones who are saying this. Everybody in the region is saying it. The Israelis, the Emiratis, the Saudis — people actually want to help."

Egypt argues that instead of fighting terrorists, the helicopters are just gathering dust — at taxpayers' expense.

"They're actually paying the storage from the aid money," the official said. "So it's their problem also. It impacts the contracts that they have signed on our behalf with the companies."

Sources close to the debate say the delay stems in part from the strenuous objections from Sen. Patrick Leahy, D-Vt., who holds the purse strings for Foreign Military Financing by virtue of his chairmanship of the Senate Appropriations panel on State and Foreign Aid.

Leahy took to the Senate floor just days after Kerry and Hagel released the helicopters to announce he was holding $650 million in fiscal year 2014 military assistance announced in tandem with the helicopters, following reports that death sentences had been handed down on hundreds of Muslim Brotherhood supporters. The hold doesn't cover the Apaches, however, raising questions about why they haven't been delivered.

"I am not prepared to sign off on the delivery of additional aid for the Egyptian military until we have a better understanding of how the aid would be used," Leahy said April 29, "and we see convincing evidence that the government is committed to the rule of law."

The Egyptians are publicly blaming Leahy for the delay in the helicopter shipment. "In order to move forward, you need some of the money of the $650 million to ship it," the official said.

Administration officials said that's inaccurate. They say the contracts were paid for with prior year funds not subject to Leahy's hold, but won't elaborate on the reasons for the delay other than to say that the interagency discussions and conversations with Congress are still going on.

"The 10 Apaches are in storage at Fort Hood, Texas, and we are working to determine when they will be shipped," a Pentagon spokesman told Al-Monitor. "They were purchased (and paid for) with prior years' FMF funding, but we are making decisions with respect to our assistance to Egypt in consultation with Congress."

The Defense Department has made clear its desire to move forward with the shipments.

The administration has not released the hold it placed last year on F-16s, M1 Abrams tanks and Harpoon missiles.

The delay has led to widespread speculation that the administration is wary of upsetting Leahy and may be waiting to get more information from the Egyptians about how they plan to use the helicopters. The senator's office did not respond to a request for comment.

Leahy "is seeking more information about the operation in Sinai," the Egyptian official said. "He wants to know about the Sinai because I think he has concerns about how we pursue the jihadi groups."

The senator's reservations come at a time when Israel and Egypt say they've never had closer cooperation in the Sinai, as Ben Caspit reported in Al-Monitor last month. The pro-Israel lobby AIPAC has been lobbying for continued US military support for Egypt, including the shipment of the Apaches.

Leahy is coming under increasing pressure to lift his objections, particularly now that Sisi has been certified as the winner of last week's presidential elections with more than 90% of the vote — a clear victory despite an unexpectedly low turnout.

Last week, 20 national security experts, including former Defense Secretary Donald Rumsfeld, wrote to Leahy urging him to "support the 'new Egypt' as they aspire in building a more democratic nation."

And even Sen. Lindsey Graham, R-S.C., Leahy's Republican counterpart atop the spending panel and a fellow critic of the military coup that overthrew Mohammed Morsi last year, is calling for the helicopters' shipment. He said he shares Leahy's concerns and doesn't want to release further money for now.

"If the world keeps falling apart, we're going to need them in Fort Worth," Graham quipped to Al-Monitor. "But they're probably better used right now in the Sinai."

by Murielle KASPRZAK and Joseph SCHMID | AFP | May 26, 2022
END_OF_DOCUMENT_TOKEN_TO_BE_REPLACED