Lawmakers in both the Senate and House warn against military aid to Egypt. 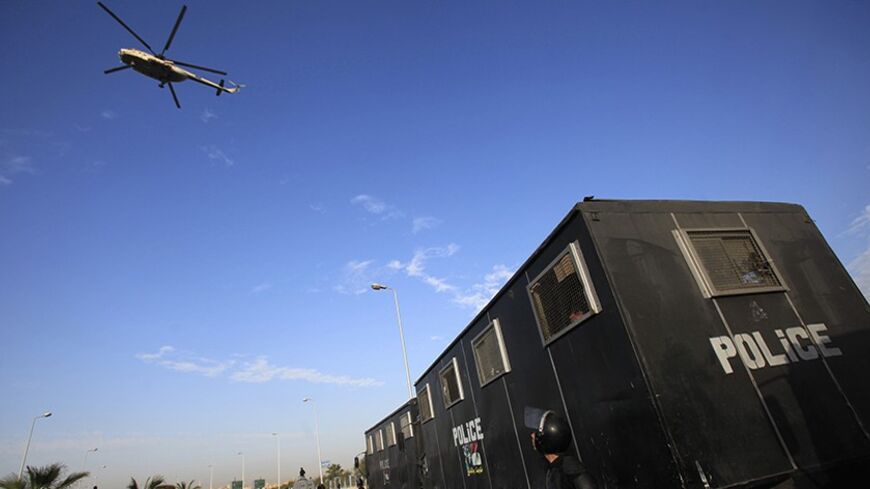 A military helicopter flies over riot police standing guard outside a police academy, where ousted Egyptian President Mohammed Morsi's second trial session was due to take place, on the outskirts of Cairo, Jan. 8, 2014. - REUTERS/Amr Abdallah Dalsh

Key lawmakers of both parties are warning the Obama administration of serious consequences if it resumes aid to Egypt's military government, including Apache attack helicopters needed to fight al-Qaeda-inspired Islamists in the Sinai.

Secretary of State John Kerry told Congress last week that the State Department would make a decision "in the days ahead" and made it clear that his "hope" was to reopen the aid spigot before Egyptian presidential elections that could take place as soon as next month. Democrats and Republicans who control the government's purse strings vowed in turn to put their foot down unless Egypt makes clear progress toward democracy.

The Obama administration suspended aid after President Mohammed Morsi's ouster in July, bowing to pressure from critics in Congress.

"We've got a piece of the pie," said Sen. Lindsey Graham, R-S.C., the top Republican on the appropriations panel on foreign aid. "I think our piece is the key, and I want to see Egypt move toward a civilian-controlled, democratically elected government."

Graham said he was worried a military crackdown could spark an Islamist insurgency like the one that plagued Algeria in the 1990s. He said that there are "a lot of members who want to make sure our money is conditioned, that we don't just write blank checks."

Graham told Al-Monitor that he didn't think administration officials would be "bold" enough to resume aid after his warnings. But if they do, he vowed to tie their hands in the future.

"We've got to pass another appropriations bill, so sometime between now and the fall there will be several vehicles," Graham said. "I intend to reinforce democratic transition [with] more conditions on Egyptian aid, being talked about as we speak."

Graham may be able to count on the support of the subpanel's chairman, Patrick Leahy, D-Vt. Leahy championed language in January's omnibus spending bill that requires Kerry to certify that Egypt is "taking steps to support a democratic transition," that it has held "parliamentary and presidential elections" and that the new government is "taking steps to govern democratically" before $1.3 billion in annual military aid can resume.

The spending bill contains exemptions for "counterterrorism, nonproliferation, and border security programs, and development programs in the Sinai." But the administration may be wary of cutting Congress out of the loop once again: Kerry ignored legislation barring aid to countries that undergo military coups last year, and then-Secretary of State Hillary Clinton angered Leahy two years ago when she used a national security exemption to maintain US aid despite a lack of democratic progress at the time.

“If they move forward [with military aid] absent credible progress in supporting a democratic transition that would be a mistake," said a Senate Democratic aide. “The recourse would be to either hold up the funds — which Congress has the ability to do — or in the fiscal year 2015 legislation approach it differently by giving the administration less flexibility.”

The aid also faces skepticism in the House. Many Tea Party members in particular believe that the US is wasting its money supporting non-democratic countries that aren't America's friends.

"A lot of the newer members, they don't like the instability in Egypt and sending a lot of hardware over there and any money," said Rep. Ileana Ros-Lehtinen, R-Fla., the chairwoman of the House Foreign Affairs subcommittee on the Middle East. "So I think it's going to be a heavy lift for the leadership to get any big aid package. But we've done it before."

Graham's vocal opposition has emboldened those critics, she said.

"Once he makes it a big deal, then it translates into a lot of folks here believing that it's a big deal — and it is a big deal," Ros-Lehtinen told Al-Monitor. "Especially because it's not only what we're sending; it's making decisions without counting on Congress."

Indeed, the administration's aid push comes at a time of growing Republican frustration with unilateral White House decisions, notably with delays to the health care law. The Republican-controlled House is considering several bills aimed at limiting the president's use of executive orders.

Sending helicopters to Egypt, Ros-Lehtinen said, "would probably lead to one of our lawsuits if we ever get to pass one of these bills that would allow us to take everyone to court."

"The administration believes that they have a lot of leeway and a lot of power to decide what is being given to countries in distress," she added. "They can move [money] around and they can designate it without counting on Congress, and I think the administration continues to overstep its role when comes to appropriations, when it comes to aid packages to foreign countries, and they are usurping our role."

Powerful voices are lining up in support of the aid, however.

The top Republican on the Senate Armed Services Committee, Sen. James Inhofe, R-Okla., made it clear during a hearing with the commander of US Central Command earlier this month that he supports Egypt's request for 10 helicopters. And Rep. Kay Granger, R-Texas, Leahy's equivalent in the House, also supports resuming the aid.

"The FY 14 Omnibus Appropriations bill creates a framework for the Administration to provide assistance to Egypt, and Chairwoman Granger will continue to review the delivery of military equipment and resumption of other aid," a Granger spokesman told Al-Monitor in an email. "She will carefully consider the vital relationship between the US and Egypt as she works with other Members of Congress to draft the FY15 Appropriations bill."

Lawmakers have also been hearing from Egypt's neighbor across the Sinai. Israeli ambassador Ron Dermer met with the Republican pro-Israel caucus recently and sang the praises of the new Egyptian leadership.

"I have my reservations too about the instability of the Egyptian government," Ros-Lehtinen said. "But when I hear from our closest ally, who has got a lot at stake for her survival — and they have high standards for who has been a good partner — then I feel like better about helping Egypt."