US lawmakers are signaling that the United States could withhold hundreds of millions of dollars from the Palestinian Authority over PLO Chairman Mahmoud Abbas' gambit with the United Nations. 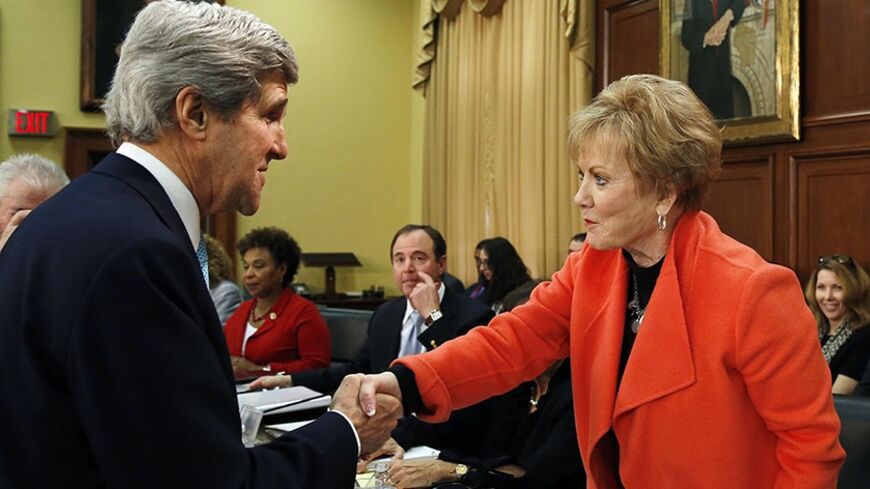 US lawmakers are threatening to withhold hundreds of millions of dollars in US aid to the Palestinian Authority (PA) if President Mahmoud Abbas goes through with his stated intention to sign on to 15 UN treaties.

Congress sought to tie funding for the PA to preservation of the status quo at the UN in this year's omnibus spending bill.

While it's not clear Abbas' decision violates the letter of the law, appropriators have made it clear they think its spirit has been trampled on.

She said the goal of US assistance since the 1990s has been to help strike a peace deal, and that the UN move appears antithetical to that.

"What a lot of it was, we're going to try to help as you try to negotiate at the peace table in good faith," Granger said Wednesday after a hearing where she pressed President Obama's UN envoy, Samantha Power, on the issue. "Well, I can't see that that was good faith."

"There was a decision made last year that investing in the PA and economic development would be the most productive step we could take to encourage peace," Lowey told Al-Monitor. She said it's not clear whether that's still the case.

Current law contains several restrictions on the aid, including requirements that the PA battle anti-Israeli "incitement" and refrain from dragging Israel before the International Criminal Court or joining more UN agencies. The Obama administration has requested $440 million in aid, but the spending bill doesn't set a figure.

"Congress is silent on the funding levels for the PA," a House aide explained. "We require a spend plan for how the administration wants to direct assistance to the PA with the requirement that they have to provide Congressional notifications to the committees of jurisdiction. Once Congress is notified we have the ability to hold funds. We also have updated and strengthened the conditions on our assistance to the PA in the FY14 bill."

Aid would be cut if "the Palestinians obtain the same standing as member states or full membership as a state in the United Nations or any specialized agency thereof outside an agreement negotiated between Israel and the Palestinians," the omnibus spending bill states.

Secretary of State John Kerry can waive the restrictions if he "certifies to the Committees on Appropriations that to do so is in the national security interest of the United States, and submits a report to such Committees detailing how the waiver and the continuation of assistance would assist in furthering Middle East peace."

Power had harsh words for the PA at Wednesday's hearing — but stopped short of announcing an aid freeze.

"The United States will stand with Israel, we will defend it, and we will challenge every instance of unfair treatment throughout the UN system," Power said. "This solemn commitment also extends to a firm opposition to any and all unilateral actions in the international arena, including on Palestinian statehood, that circumvent or prejudge the outcome that can only come about through a negotiated settlement."

The president's fiscal year 2015 budget request includes $370 million in Economic Support Funds that the State Department says "creates an atmosphere that supports negotiations, encourages broad-based economic growth, promotes democratic governance, and improves the everyday lives of Palestinians, thereby creating an environment supportive of a peace agreement and contributing to the overall stability and security of the region." It also sets aside $70 million in International Narcotics Control and Law Enforcement funding aimed at "reforming the Palestinian Authority (PA) security sector, and sustaining and maintaining the capabilities that the security forces have developed."

Some outside observers believe Abbas was careful not to run afoul of the spending legislation when he announced his decision. While he is expected to sign on to the treaties when he appears before the UN General Assembly Friday, he will not be joining any agencies.

"Technically they're not in violation" of the appropriations law, said Lara Friedman, the director of Policy and Government Relations at Americans for Peace Now. "That technicality may be irrelevant, because we have a new … bill coming up, and odds are Congress will just change that language."

Cole Bockenfeld, the advocacy director at the Project on Middle East Democracy, said Abbas probably has a good understanding of US law.

"My sense is he knows it very well or US government folks would be communicating that very clearly to him," Bockenfeld said. "Even on previous steps it seems calculated very clearly exactly how far they're willing to go."

But Congress may react harshly after failing to stop further UN steps by the Palestinians that they see as being aimed at undermining Israel.

Lawmakers — including Granger and Rep. Ileana Ros-Lehtinen, R-Fla., chairwoman of the House Foreign Affairs panel on the Middle East — blocked aid after Palestine joined UNESCO as a member state in 2011. The Obama administration released $500 million in previously appropriated funds last year after lawmakers lifted their objections.

"The language that they inserted [in the spending bill] was sort of to draw a line in the sand about not going any further in the UN after what happened in UNESCO," Bockenfeld said. "It's designed to stop any further moves, so now that [Abbas] is making further moves, whether it crosses that line or not — how the Congress will interpret that, how the administration will interpret that, there's a good chance those two will be different interpretations altogether."

The Palestinians argue that their UN application has nothing to do with the peace process — or with Congress.

Maen Areikat, their ambassador to Washington, said the PA agreed to put its UN applications on hold in exchange for Israel releasing 104 Palestinian prisoners, some of them accused of deadly attacks against Israelis, as called for under Kerry's peace talks framework. When Israel reneged on releasing the last batch of 26 prisoners over the weekend, he said, the PA was relieved of its obligation — even as it continues to participate in the peace talks.

"It was a natural reaction for us when the Israelis did not honor their commitment," Areikat told Al-Monitor. "I don't understand why the United States — and the US Congress — would interpret that as a step by the Palestinians to undercut or undermine US efforts. From the beginning we've said that we are not seeking any confrontation with the United States, nor with the Congress."

Areikat went on to say that cutting aid would only hurt common Palestinians.

"We very much appreciate the support that the United States is providing toward the Palestinian people," he said. "But Congress cannot expect us to keep our part of the deal when the Israelis are reneging on their part."

His office is circulating a Q&A from Palestine Liberation Organization's Negotiations Affairs Department on Capitol Hill that spells out which treaties Abbas plans to sign and makes the case that the peace talks aren't undermined by the move.

"What they need to do is understand exactly the nature of this Palestinian step and not try to overreact and take it to a different level that would, in the end, undermine US interests," Areikat said. "To go back punishing the Palestinians, I don't think will be productive and I hope it does not happen."