Hamas deal last straw for Congress on US aid to Palestinians

Some lawmakers are already calling for an immediate suspension of aid. 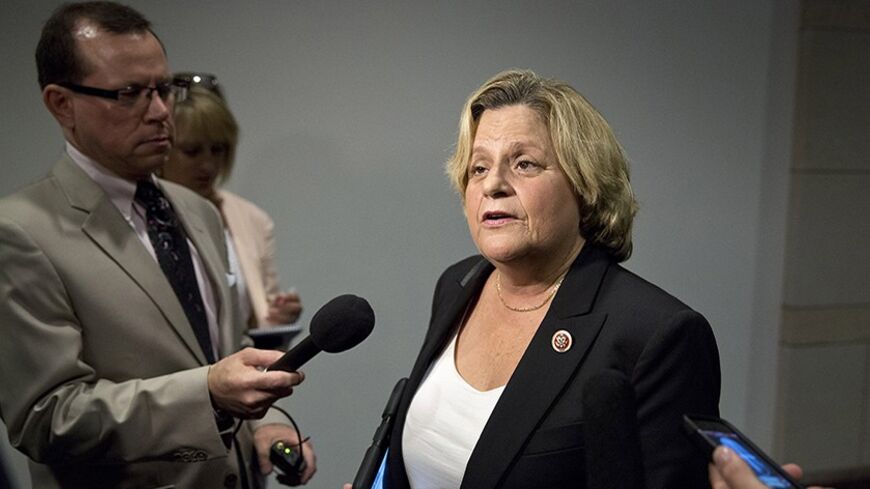 Wednesday's announcement of a reconciliation between the rival Palestinian factions Hamas and Fatah triggered an instant call for retaliation on Capitol Hill.

"The Administration must halt aid to the Palestinian Authority and condition any future assistance as leverage to force Abu Mazen [Mahmoud Abbas] to abandon this reconciliation with Hamas and to implement real reforms within the PA," Ros-Lehtinen, who chairs the House Foreign Affairs panel on the Middle East, said in a statement. "U.S. law is clear on the prohibition of U.S. assistance to a unity Palestinian government that includes Hamas, a designated Foreign Terrorist Organization, and President [Barack] Obama must not allow one cent of American taxpayer money to help fund this terrorist group."

Her Democratic counterpart on the subcommittee, Ted Deutch of Florida, issued a similar warning.

"President Abbas now stands at a pivotal crossroad — does he want peace with Israel or reconciliation with Hamas?" Deutch said. "Be certain that the Palestinian Authority will face significant consequences if a unity government is formed that includes terrorist members of Hamas."

The statements follow reports out of Gaza that Hamas and the PLO, which runs the PA in the West Bank, have agreed to form a unity government within five weeks. Such a government would then prepare for elections within the next six months.

"I announce to our people the news that the years of split are over," Hamas Prime Minister Ismail Haniyeh was quoted as telling reporters in Gaza.

The announcement comes on the heels of the Abbas' decision to sign 15 UN treaties, a move that had already triggered congressional ire. House appropriators warned earlier this month that they could revisit aid requests as a result of that decision, which the Palestinians said was in response to Israel's failure to release a fourth and final batch of prisoners under the terms of US-brokered peace talks.

The White House requested $440 million for aid to the West Bank and Gaza in 2014.

The president's fiscal year 2015 budget request includes $370 million in Economic Support Funds that the State Department says "creates an atmosphere that supports negotiations, encourages broad-based economic growth, promotes democratic governance, and improves the everyday lives of Palestinians, thereby creating an environment supportive of a peace agreement and contributing to the overall stability and security of the region." It also sets aside $70 million in International Narcotics Control and Law Enforcement funding aimed at "reforming the Palestinian Authority (PA) security sector, and sustaining and maintaining the capabilities that the security forces have developed."

"Well, obviously, there would be implications," she told reporters on April 23. "I don't have those all in front of me … but what we're going to watch and see here is what happens over the coming hours and days to see what steps are taken by the Palestinians."

The Palestinian envoy to the United States had no immediate comment.

The 2006 anti-terror law bars aid to a Hamas government unless the group recognizes Israel, dismantles terrorist infrastructure in its jurisdiction and ceases anti-Israel "incitement." Early reports suggested that's unlikely to happen, with the Palestinian Information Center quoting Hamas parliamentarian Hassan Youssef as declaring that Hamas would neither recognize Israel nor "give up the resistance."

Israeli Prime Minister Benjamin Netanyahu said Abbas would have to choose between Hamas and peace talks with Israel.

"Does he want peace with Hamas, or peace with Israel?" Netanyahu said. "You can have one but not the other. I hope he chooses peace. So far, he hasn't done so."

Ironically, Frisch suggested Israel would welcome a unity government — if Hamas turned over a new leaf.

"In fact," he said, a unity government "would be much better, because any peace talks could possibly result in a peace agreement with all the Palestinians, rather than half the Palestinians."

"Until now," he said, "any process that ends up with a peace agreement with Abbas, we know with 100% certainty that come the next day Israel will be attacked with rockets from Gaza."

"In the coming weeks, I will convene a subcommittee hearing on this issue and many more regarding the PA, Israel and the peace process," she said. "It’s long past time the US reassess its relationship with the corrupt Abu Mazen and his cronies."

Her panel is scheduled to hold a hearing next week on Obama's fiscal year 2015 budget request for the Middle East and North Africa. Slated to testify are Anne Patterson, assistant secretary of state for Near Eastern Affairs, and Alina ​Romanowski, deputy assistant US Agency for International Development administrator.